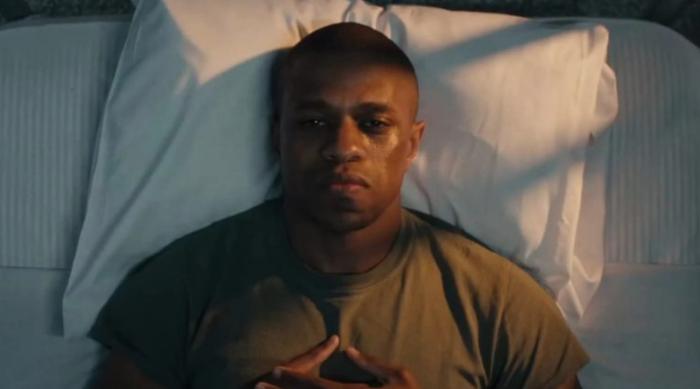 “Are you sure?” Those words were my own mother’s pained reaction to my coming out as gay when I was nineteen years old, and it was if I could hear them all over again reverberating across all of director Elegance Bratton’s outstanding and moving The Inspection, which just recently closed the New York Film Festival. Telling his own autobiographical tale of joining the Marines at the age of 25 in the hopes that he’ll both give himself a firmer foundation in life as well as make his mother look at him with something other than disgust and disappointment, The Inspection is the best case example for what happens when we let untold stories be told by the marginalized groups who lived them. It thrums with an honesty in the nuances that could only come from someone who’s seen through these eyes.

Starring big-screen newcomer Jeremy Pope (he’s been burning up Broadway for the past few years and was one of the leads on Ryan Murphy’s series Hollywood) as Bratton’s stand-in Ellis French, we first meet Ellis on the streets, a ratty beard and rattier clothes giving the impression he’s been there for quite some time. He knocks on a door, and the way the woman who comes to it peers coldly past the chain-lock you’d be forgiven for assuming she was any stranger on earth, save his own mother.

But that’s exactly who she is, played with an unflinching hardness by Gabrielle Union in a bit of a revelatory turn—those of us who value comedy as a skill-set knew Union could bring it since Bring It On but it’s still a cold smack upside the head seeing her dig into the complicated and deeply unkind places that she does here as Inez. Watching her put newspapers down on the sofa before she’ll allow her son to sit on it is about as cruel an act as I’ve seen splayed on a movie screen in a long while, but Union dials it all so far back that we’re forced to lean forward, despite our horror. This is meant as no knock against Mo’Nique’s unforgettable turn in Precious but this performance stands in direct opposition to that operatic monster—Union makes Inez inscrutable. Given her scarcity across the film (she’s really only seen at its beginning and its end) that smart choice haunts the film, much like Inez does her own son.

Ellis is there to get his birth certificate which he needs in order to join the Marines, and once that’s accomplished it’s off to boot camp he goes. That is where the majority of The Inspection is set. It’s impossible not to conjure up all of the other movie boot camps while watching this one unfold—the definitive turns of Louis Gossett Jr. in An Officer and a Gentleman and R. Lee Ermey in Full Metal Jacket stand like twin sentinels over the genre—and Bratton smartly doesn’t try to ignore those shadows. This here is just that same experience viewed from askance, from a new perspective, and hell what a difference it makes.

The clash between the rogue individual and the system that wants to beat them down into a perfectly formed square mold to fit alongside all of the other perfectly formed square molds is always the subtext, the text, the uber-text of these stories—to fight back is Cuckoo’s Nest crazy, until you’re pumping a fist in the air and carrying Debra Winger off into the sunset anyway. But Ellis isn’t just some individualistic rebel, flashing his middle finger at The Man—he wants in as much as anybody, but what sets him apart are the core components of his very being as a black gay man. There is simply no place for him in the system as it stands. For him to exist is an act of rebellion in itself. It can’t be denied or wished away—like the group shower scene that becomes an erotic fantasy in Ellis’ mind despite his best efforts to bury it down, and alongside his body’s natural response to it, The Inspection knows bone-deep it’s the absurd denial of humanity that’s at fault. This is not some ego stroke for bad boys who’ll just conform to the cookie-cutter in the end.

And so Ellis’ presence, a threat to the entire structure, is fought back at tooth and nail. Bokeem Woodbine unspools an unnerving turn as the abusive officer in charge, and American Honey actor McCaul Lombardi is all pretty sneering white privilege as a fellow recruit, second generation of course, who’s ready to pounce and pummel at the slightest provocation. (He is giving off big-time 80s Movie frat boy villain vibes, and I was here for it.)

But The Inspection, dedicated to all of this genre’s cliches as it might be, makes fascination from how it meets them back. Ellis’ resilience is endurance and kindness and honesty, all strengths he’s had to come by just by being true to who he is in this world. His hard-fought life experiences have enabled him to see straight through the macho posturing and nastiness, and he begins winning people over not by extreme feats of the same—although he’s as good at any of the military training as any of the others it’s how he can see who they all are, individually, as people, that cuts through the noise. And by then encouraging them to hold fast to their differences as strengths.

It might sound corny spelled out like that but there’s nothing much preachy about The Inspection, which sits back and watches unobtrusively; the lovely cinematography by Lachlan Milne (who also shot Minari)and score by Animal Collective are perfectly restrained touches in that regard. Ellis is no saint, either—he’s as apt to self-destruct as any, and his misreading of the friendliness that another commanding officer (a moving turn by Raúl Castillo) shows him is nerve-shreddingly epic in its horned-up bungle.

One worries the film might’ve swayed propagandistic, in that on its surface displays a young man coming out stronger and more realized on the other side of Marine training. But The Inspection is really more about the people Ellis changes in small but monumental ways along the way. And with them, one by one the hopeful possibility of a more open and honest system, made stronger by fresh air and sun and some self-determined kindness. It’s a shockingly optimistic film, sure of who it is to its core, and may we all be so blessed one day to have even one-tenth of that.


Header Image Source: A24
Most Viewed