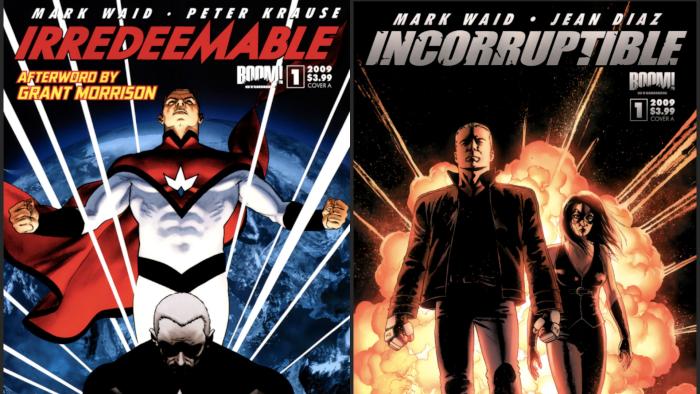 'Irredeemable' and 'Incorruptible' Comic Series to Become A Feature Film, But There's an Issue

We have good news, great news, and DEFCON 4 news, as in, which in entertainment news means something to have misgivings about, but not something to waste too much time worrying about. And now I’m realizing that’s probably not the most appropriate analogy for these times.

Yesterday it was announced that Netflix is developing the comics series Irredeemable and Incorruptible as a live-action, feature film. Jay-Z is producing alongside James Lassiter, Will Smith’s longtime producing partner, with Jeymes Samuel signing on to direct and Kemp Powers taking over the screenplay.

The good news is that we’ll get to see an adaptation of these series. The great news is that they couldn’t have found a better team to lead the project: Samuel (AKA The Bullits) is fresh off his success with The Harder They Fall, winning him a BAFTA for best debut film by a British filmmaker, while Kemp Powers current credits include the screenplay for One Night in Miami…, Soul and he is co-directing the two parts of Spider-Man: Across the Spider-Verse. They couldn’t be more perfectly suited for the role. But the one caveat I have is that these series are being adapted into a single film because they cover a story arc too wide and crazy to be faithfully captured into a single film. Also, Netflix’ track record adapting beloved comic-book series from independent houses has been mixed at best (cries in Locke & Key).

Created by Mark Waid (writer of Kingdom Come), with art by penciled by Peter Krause (among others) and published by BOOM! Comics, Irredeemable and Incorruptible are mirror stories set in the same universe, the events in one impacting the events of the other until their shared conclusion. They fall into the comic-book tradition of the fallen/evil Superman, as seen in The Boys, Invincible, Powers … pretty much every Indie publishing house or imprint for adults of the Big Two has one of these. Irredeemable focuses on the Plutonian, a superhero who shares the same superpowers as the boy in blue, in a way that is both fair use and homage if you read the entire series. When the series starts, he suddenly does a heel turn into the full, Old Testament God, enslaving the Earth and killing millions of people wantonly. Incorruptible (released a few months after the first issue of the former) follows Max Damage, a supervillain, and the Plutonian’s main-main rogue. Horrified when seeing the Plutonian destroying a city, he decides to do a face turn and put an end to his foe, for the right reasons this time. Since he knows little about being a hero, he imposes a strict code of ethics on himself, which includes never lying and breaking up with his sidekick and girlfriend … who happens to be a teenager. Yeah, he was that bad.

Irredeemable, unlike other fallen Superman stories, works so well because it’s basically a world that was very much Silver-Age in tone and characters being disrupted by the grimness and cynicism of the Bronze-Age and Frank Miller’s worldview. Incorruptible works in the opposite direction, with a despicable villain, bathed in hard-boiled aesthetic, trying to save a grim world through black & white morality. Results are not always optimal. Because of this, the characters will have a somewhat stagey, melodramatic affect in the beginning, but as the story moves forward, the tragedy of the Plutonian’s life starts balancing the tone, while things go into multiverse madness.

This is why I am concerned about adapting these series into one film. They are not that long compared to other completed series: 37 issues for Irredeemable and 30 for Incorruptible, but simple maths will tell you two hours is not enough to fully develop the storylines and characters. Plus, there was a point to having two series following the same overarching storyline, precisely in that they are mirrors to each other, more than parallel stories in the same universe. What would work is three movies: One following the Plutonian, one following Max Damage, and one bringing them together. Something similar to the Fear Street Trilogy, but like, better.

I think Jeymes Samuel and Kemp Powers have the right vision for these stories. In The Harder They Fall, Samuel showed he has great skills in complementing a highly aestheticized world with authentic human emotion, very well suited to manage comic books that are one overarching tone-shift. And of course, Powers has nothing to prove. His signing did give me hope for a second that they would adapt these as animated movies, which would work better in my opinion. However, with Samuel at the helm, this adaptation will have the budget it needs. Though if Netflix could pony up a little bit more for a trilogy, the better. At the very least, this is going to look a thousand times better than Jupiter’s Legacy.