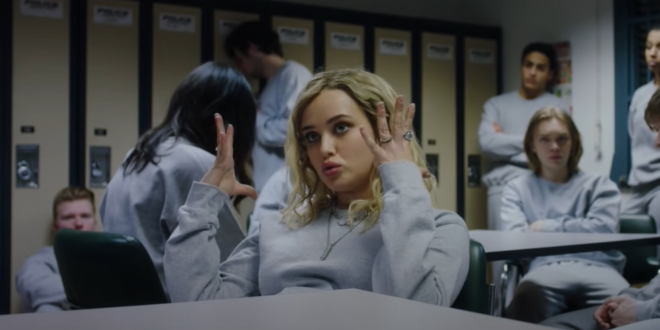 Brace yourself for an explosive and gory coming-of-age comedy, because Spontaneous is sensational, sick, and shouldn’t be missed (again). This wild and romantic horror-romp hit theaters last fall, but we’re catching up with it now that it has hit digital.

Screenwriter Brian Duffield (The Babysitter, Underwater) makes his directorial debut adapting Aaron Starmer’s novel Spontaneous. The film follows snarky high-school senior Mara (Katherine Langford), through one hell of a year in which her classmates began to explode without warning. Duffield wastes no time throwing us into the plot. One second, we’re in a mundane calculus class. The next, a slew of students are panicked, yowling, and caked in the blood and bits of smiley stoner Kaitlin, who has spontaneously blown up.

Trying to make sense of this senseless tragedy are the grown-ups, from parents and teachers to scientists and FBI agents. But their fumblings are little comfort to the traumatized teens who know all too well they could be next. While this sounds like a super stressful scenario, Spontaneous keeps things light by sinking its audience into the attitude of Mara, who is pushing off processing her pain with the help of gallows humor, drugs, and a new boyfriend. This hard-as-nails heroine has a soft boy in Dylan (Charlie Plummer), who decides life really is too short not to go for what you want. So, he texts her out of the blue, confesses his crush, and sends her a dick pic—as in a picture of Richard Nixon. (“Sorry it’s crooked.”)

The two hit it off, and amidst a community gripped by terror find their own slice of heaven. They make dark jokes, confess embarrassing truths, and dance as if the world might end at any moment. It’s a deeply sweet and satisfyingly quirky love story, occasionally blasted by buckets of blood as more and more kids explode. This abrupt gore knits a thread of tension through the plucky romance plot. Every time a close-up lingers on Dylan’s face, you can’t help but fear he might be next. Or maybe it’ll be Mara’s best friend since grade school. She and Tess (Hayley Law) have dreams of growing old and living in a beach house together, smoking a hookah and sinking their toes in the sand. But that seemingly simple dream is threatened by all the uncertainty and death around them. How can a kid plan for a future when a future is not guaranteed?

For much of the film, the light tone comes from Mara’s refusal to recognize her fear and grief. When her breaking point hits, Spontaneous shifts from black comedy to earnest drama, following a girl who is broken in a way familiar, even if her circumstances are extraordinary. If this film had hit a year ago, it’d be most crisply an allegory about school shootings. Teens are urged to go about their lives as if each day they didn’t risk abrupt annihilation. As they do, the grown-ups who should protect them look on helplessly or offer the useless motto “thoughts and prayers.” At one point in Spontaneous, a spirited jock yells at the government officials who’ve quarantined the class, “You politicians don’t care about us! We are the only ones who care about us.” It’s easy to see him as a stand-in for the Parkland survivors, who’ve had to do something and become their own advocates because those in power refuse to. Today though Spontaneous could be about much more.

2020 was an absolute sh*tshow. Between Trump’s mayhem, the pandemic, and a barrage of headlines that felt like an assault on our sense of sanity and reality, it was a damn hard year to carry on. Spontaneous was shot back in 2018, so the filmmakers had no idea how it’d hit when it did. Here, we watch a teen who is trying her best to keep her head above water, but there’s no way to control or even predict the next wave. And who does she have to turn to? Her friends who are struggling to survive too? Her parents who admit they’re not equipped for this level of hardship? The internet, where conspiracy theories about a deadly curse reign over reason?

Coming-of-age stories often conclude with the protagonist walking off into the sunset, either with a happily ever after or a profound life lesson. Spontaneous is drenched in too much viscera for the ending to be called “happy.” What it offers instead is better than happy, it’s honest. Mara delivers a Ferris Bueller-like monologue about embracing life, but unlike the happy-go-lucky ’80s icon, she does so while recognizing life’s horrors. Her final message is one of choosing to live—not just survive—as an act of defiance against the random disasters. Ultimately, it’s a message that feels like a perfect inspiration as we push into whatever the hell 2021 might bring our way.

*ICYMI: Is less In Case You Missed It and more OK We Missed It. Here we’ll rave about great movies we missed on their initial release that are now available on streaming, digital, etc.

Spontaneous is available for rent on digital.