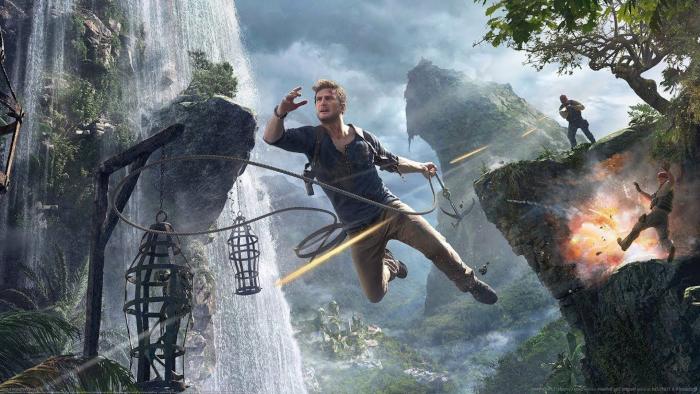 It has often been said that video game movies are cursed creations doomed to fail, and it’s not hard to see why given the near-solid three-decade streak of terrible adaptations that Hollywood keeps trying to make happen. It says a lot about the medium when the recent take on Sonic the Hedgehog is one of the more successful attempts. There is one game franchise, however, that many have seen as prime for the cinematic experience, in large part because it’s basically a playable movie in the best way possible. The Uncharted series is the creation of developers Naughty Dog and their success was pivotal to the success of the Playstation in its third and fourth generation. The four main games and assorted prequels and spin-offs are deeply cinematic in form and style, with the story of professional treasure hunter Nathan Drake essentially being a modern-day homage to Indiana Jones.

It’s no wonder Hollywood has been keen to make an Uncharted movie happen but the constant cycle of delays, development hell, and false starts has many of us wondering if it will ever happen. Indeed, production was supposed to have started already, albeit not in the form that many fans were expecting. Ruben Fleischer, who brought Venom and Zombieland to life, is helming the picture and Spider-Man himself, Tom Holland, will play a young Nathan Drake in an origin story that takes place before the games (young Nathan is playable in some flashback scenes.) Marky Mark Wahlberg will play Nathan’s mentor Victor Sullivan and Antonio Banderas is signed on for an undisclosed role. Alas, production came to a halt on literally the first day of shooting thanks to coronavirus, as Holland explained in an interview with Jimmy Kimmel:

‘I was in Berlin making a film called Uncharted with Mark Wahlberg, and we were all ready to go. We went to set for day one shooting and we got shut down and we all got sent home. So, whether we shoot that movie first or Spider-Man first, I’m unclear. I don’t know. But both movies are being made and they’re both strong and the scripts are fantastic so whatever happens, happens. I’m ready to play both.’

Initially set for a March 2021 release, Uncharted will now drop on October 8, 2021. Honestly, even if there weren’t a literal pandemic going on, I would have been stunned if Uncharted had an easy and untroubled production. This movie has gone through more directors, casting rumors, and production dates than even the DCEU Flash movie.

The first iteration of an Uncharted movie was announced in November 2009. Sony Pictured hired Thomas Dean Donnelly and Joshua Oppenheimer to write the screenplay. At the time, they were best-known for the sci-fi movie A Sound of Thunder, a critical disaster of a movie that made back $11 million of its reported $80 million budget. Never let it be said that failing upward is a new thing in Hollywood. The attached director, believe it or not, was David O. Russell and his dream Nathan Drake was Marky Mark. This version of the movie fell apart pretty and by May 2011, Russell was no longer attached because of ‘creative differences’ (read: David O. Russell is an awful person to work with.)

Two months later, in July 2011, Neil Burger was announced as the new director. Once again, news of updates fell silent until Burger dropped out, choosing to do Divergent instead. That was certainly a choice. Sony decided that, after so much turmoil, they needed a fresh screenplay, so onboard came Cormac and Marianne Wibberley, the husband and wife team behind the National Treasure films. Seth Gordon became the latest director to sign on then off. Clearly, whatever plans they had for this wannabe franchise just wasn’t coming together, so they needed to jazz things up. Out went old Nathan Drake and in came an origin story.

Holland has been attached to the project since May 2017. At the time, Shawn Levy was on board to direct and he’d been connected to Uncharted for a couple of years by this point, following Gordon’s departure. Joe Carnahan, who directed the 2010 version of The A-Team and wrote this year’s Bad Boys for Life, had been hired to work on the screenplay. Sony wanted a new franchise to center on Holland since his work as Spidey had helped make them a whole lot of money. In January 2019, with seemingly no progress being made, Levy jumped ship to make another video game movie instead, the upcoming Free Guy with Ryan Reynolds. Dan Trachtenberg of 10 Cloverfield Lane then stepped in to direct.

This time, the company seemed confident that they’d get to the shooting stage, so they set a release date of December 2020. Once again, however, fate intervened, and Trachtenberg became the fifth director to leave Uncharted. By this point in time, signing onto direct Uncharted was the industry’s equivalent of community service or a gap year. That number would become six — hello and goodbye to Travis Knight of Laika Animation fame — before Fleischer hopped on board and got a real cast together. Now things were set. They had a cast AND a release date AND a finished script AND a release date of March 5, 2021. What could possibly go wrong now?! Ha ha haaaaaa…

Personally, I would just love a good old-fashioned action-adventure romp in the style of the games to be brought to the big screen, but so many cooks spoiling the broth of this adaptation has me worried. A young Nathan Drake origin tale is at least an interesting spin and Holland is certainly charming enough to hold my interest. Still, maybe all this chopping and changing is a sign of not-so-good things to come.

Uncharted is currently set for an October 2021 release, but who bloody knows what’s happening at this point in time.