'Heathers: The Musical' on Roku Is Fine. That's The Problem

I have nothing critical to say about the stagecraft or performances in Roku’s presentation of Heathers: The Musical. Recorded in May at London’s The Other Place Theater, the production values are great and they did a nice job of filming all the action on the thrust stage. Although they managed to remove the individuality of all The Heathers’ and Veronica’s outfits, making them more uniforms than color themes, the costumes are lovely. And, while I thought everyone was kind of high pitched and nasally, that might just be because I’m old and everyone under 30 sounds high pitched and nasally to me. If you like musicals, this is an enjoyable theatrical experience that you can watch for free! You can probably even watch it with your older kids, but you might find yourself having to explain what a “handjob” is.

However, if you’re a fan of Heathers, the seminal 1988 film, written and directed by first-timers Daniel Waters and Michael Lehmann, you will be disappointed. Or mad. Or both. Some properties can be reimagined for the universe of musical theater, where all problems are solved with a song and dance. Heathers is not one of those properties. All of the dark, sardonic humor of the film has been stripped away and replaced with hopeful enthusiasm. This is not something that anyone associates with the film that gave us this iconic image: 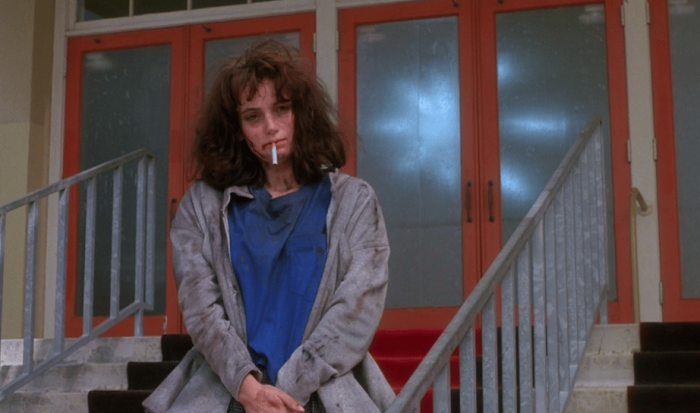 By their nature, there is too much joy in musicals to properly represent Gen-X’s high school experience. You could probably squeeze a jukebox musical out of Pump Up The Volume or The Breakfast Club (Not this though.) Heathers is singular in the malicious motivations of every character (except Martha Dumptruck and Betty Finn, of course) and the bitter, biting wit of so many memorable lines.

The whole thing is like watching Heathers through the looking glass. Upside down, inside out, and out of order. Trading the movie’s pessimistic anti-bullying message for a very in-your-face “LET’S IDENTIFY AND FIGHT BULLIES IN ALL THEIR FORMS AND MAKE THE WORLD BETTER” theme screamed through a bullhorn.

Veronica’s character is turned on its head. She believes that there is hope for her classmates to be better people from the opening number of the show, ‘Beautiful,’ instead of the idea being a cynical “F*ck you” to Heather McNamara (green) after Veronica has put a violent end to JD’s machinations. Her relationship with JD is different too; they made her the sexual aggressor while JD suffers under his bullying father’s thumb.

Speaking of JD (infamously played by Christian Slater in the film,) Jason Dean in the musical is less sexy, plaid-wearing, psycho and more sympathetic, eyelash batting, damaged goods. There’s even a song about it. Of course, there is. There’s also no real chemistry between Veronica and JD. The 7-11 scene — which is played as slinky, sexy, noir in the movie — is LOL, forget all of your problems by getting brain freeze from a slushie, LOL song.

It’s all really for the laughs while the movie (which is streaming on The Roku Channel) still feels deadly serious. The musical’s audience, seen in the recording, are all way too young to have had their adolescence informed by the movie and they all seem to be having a really good time. Maybe I’m too much of a grumpy, monocle-wearing Veronica and should have just clapped along to ‘Our Love Is God,’ the number about how Veronica saved JD from himself with her love.

Nah. The real JD never would have approved.

Heathers: The Musical is streaming, for free, on The Roku Channel (which is also free!)


← Who Are the Other Two Suspects in the Adnan Syed Case? | The 'Quantum Leap' Has a Number of Wrongs to Right Before It's Worthy of the Original →