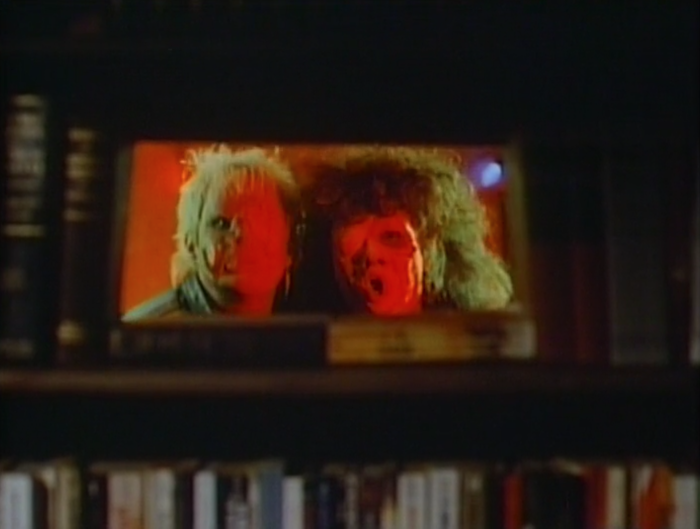 The Award for 'Dumbest Twist Ending' Hasn't Changed Hands Since 1988

There is not a single movie that I have regretted watching. There are many bad movies that I have watched—the canine snuff film and the one where Christian Jesus did Hiroshima and Cats. But every movie, no matter how awful, expands my knowledge of the medium, even if all it does is recalibrate my understanding of just how bad a movie can be. If, say, Top Gun is dull and jingoistic—at least its leads have charisma. If Holidate was dumb, at least it was competently shot. If Serenity and Wild Mountain Thyme have utterly bewildering third-act plot twists—well, at least they’re not Grotesque.

Grotesque — if you’re not one of the unlucky two dozen or so souls who have seen it — is one of the many (rightfully) obscure horror films that litter the digital halls of Amazon Prime, their rights situations obscure, their quality highly variable. It was released in the U.S. by Empire International Pictures, which during its short run in the ’80s distributed some genuinely good horror movies, like Re-Animator and Dolls. Grotesque is not a genuinely good horror movie. It’s barely a movie at all. It stumbles around drunkenly from trope to trope (Punks! Home invasion! Monsters! Gothic horror!), picking up and forgetting about characters at the drop of a hat and taking a machete to any idea of screenplay structure. And yet. In Grotesque’s exquisite, compelling ineptitude, it set a bar that no other movie has been able to clear in the three-plus decades since its release. It has the dumbest twist ending of all time.

To call the ending of Grotesque a “twist” isn’t entirely accurate, since the whole movie is basically comprised of them. It’s a silly straw of a movie, setting off in one direction before deciding, nah, it’d really rather do something else. In its first scene, we see an old woman in a mansion in the middle of a thunderstorm, dramatically monologuing about some dude named John who used to come to her “like a zephyr on the wind.” (Not sure what search term you’d use on PornHub to get that.) Then: Surprise! That was a movie-within-a-movie. The real movie’s about to start. Aaaany minute now.

The real movie is about Lisa (The Exorcist’s Linda Blair) and her friend Kathy (Angel’s Donna Wilkes) going to Lisa’s parents’ place up in the woods. Her dad, Orville Kruger (geddit?), is a special effects makeup artist who worked on the movie we saw before-which Grotesque thinks explains why we started one movie watching an unrelated scene from a completely different movie, even though it really doesn’t. En route to Casa Kruger’s mountain cabin, Lisa and Kathy come across a group of punks—“punkers,” in the parlance of the film—who believe something valuable is being held in the house and are determined to rob it. Grotesque then becomes a home invasion thriller, elevated beyond the mundane by the electric acting and screen-blistering eroticism of The 45-Year-Old Punker and The Punker With Painted-On Ziggy Stardust Sideburns.

(In seriousness—that actress is named Michelle Bensoussan. Per IMDb, she has never been in another film, and the world is poorer for it.)

Screenwriters Mikel Angel and Joe Tornatore (who also directed) give the home invasion deal about 30 minutes before they get bored with it, switching the movie into a different mode with the introduction of a new character: A monster with a labia on his face! He’s a member of the Kruger family who’s been living in a secret room. Let’s not go into it. 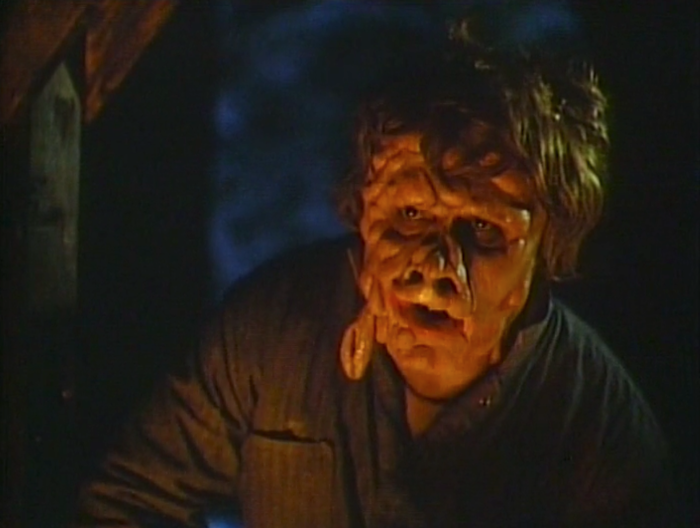 Monster chases punkers. Monster kills punkers. The 45-Year-Old Punker and The Punker With Painted-On Ziggy Stardust Sideburns survive and kill Linda Blair, our main character, who’s gotta be glad that she’s out of this movie and onto other, classier late ’80s fare like *checks IMDb* Bedroom Eyes II.

Almost everyone is dead by this point. We still have more than 30 minutes in this movie. Surprise! Tab Hunter shows up! So do the cops—they kill the monster, which makes Tab Hunter sad. :( :( :( Things, against all odds, continue to happen. The 45-Year-Old Punker and The Punker With Painted-On Ziggy Stardust Sideburns (who I guess are the main characters at this point?) get out of being arrested by pinning the murders on the monster. They are not, however, able to escape the wrath of Tab, who reveals that A) the monster was his son and B) He, underneath his Tab Hunter-ish good looks, also has a facial deformity … sadly, sans genitalia. Tab, a plastic surgeon, operates on the punkers’ face and locks them in a room to scream for all eternity. We scream for joy, because the movie is over. And then.

A movie … that starts as a movie within a movie … is itself a movie within a movie … but the real movie (the one in the final scene) takes place in a world where monsters really do exist? But human beings, as evidenced by their screams when Frankenstein’s monster and the Wolfman come from the projection room to confront the audience, don’t know they exist? Which is weird, because surely the cashier at whatever Party City they clearly bought their accouterments from would have noticed something was up with them? Or is the world of Grotesque one in which monsters exist as a separate and downtrodden class, and the movie-in-the-movie is some kind of Green Book Oscar bait thing to try and promote tolerance? Did Frankenstein and the Wolfman, who have a cordial disagreement on the quality of the movie they (and we) just watched, eventually start a movie review podcast? What is going on?

Grotesque is now on Prime Video.