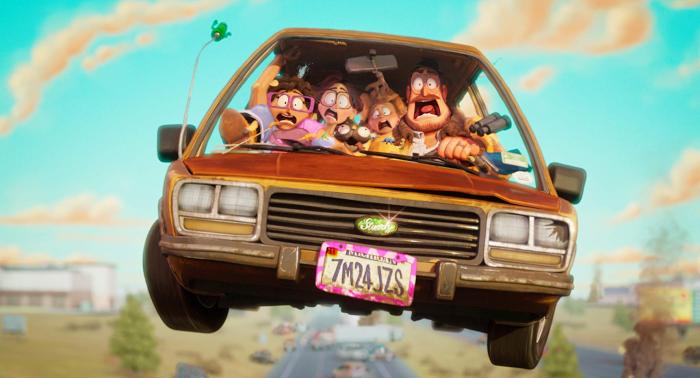 From The Studio That Brought You 'Spider-Man: Into the Spider-Verse' Comes The Sci-Fi Road Trip Adventure 'Connected'

When it comes to big animation studios, they tend to develop a brand in look and style. Disney has a long line of round-headed princesses with button noses, cuddly sidekicks, and belted song numbers. Laika delivers handcrafted stop-motion centered around quirky heroes. DreamWorks offers cartoon characters with massive eyes, rocking and rollicking in vividly colored worlds, and Illumination is a factory that churns out Minions. Then there’s Sony Pictures Animation, the studio that brought us a wide array of wild titles, from the penguin-surfing mockumentary Surf’s Up to the jaunty joys of Cloudy with a Chance of Meatballs to the heartwarming, Oscar-winning short Hair Love, and Spider-Man: Into the Spider-Verse, which is hands down one of the best films of the decade.

Not every Sony Animation movie is gold (cough The Emoji Movie cough). But each offers a wild new world with a look all its own. For their latest, Sony’s offering caricatures of the modern American family—and the tech from which they can’t unplug—in Connected.

Charming right? Centered around The Mitchell family, Connected follows what happens when dad Rick has to say farewell to his college-bound daughter, Katie. She’s ready to move on, and he can’t let go. So—family road-trip! Then, of course, there’s an apocalypse-threatening event where artificially intelligent robots rebel, and the world’s only hope is a family who is finally connected.

As if that weren’t enough of a reason to get pumped, Connected has a cast stocked with charm. Abbi Jacobson, Danny McBride, Eric André, Maya Rudolph, and Academy Award-winner Olivia Colman lend their voices. While the whole enticing endeavor is written and directed by Michael Rianda and Jeff Rowe, who cut their teeth on the absolutely astonishing fantasy cartoon series Gravity Falls. Honestly, the Gravity Falls connection alone would be enough to get me stoked. If you don’t get why, get hip to it. Thank me later.

← 'Dispatches From Elsewhere', 'Survivor', 'Doctor Who', and More on This Week's Podjiba! | 'Jeopardy!' Host Alex Trebek Updates Us On His Health →