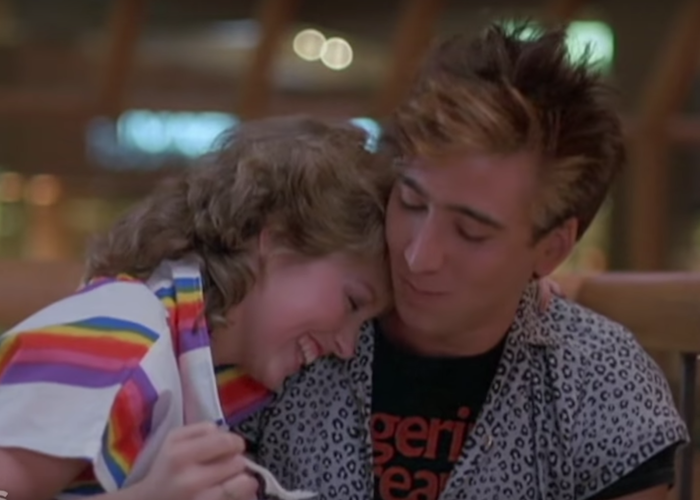 Friends, I realize I’m coming in strong here with that headline, and for that I apologize, but also? I firmly believe my assertion. Valley Girl is the best movie of 1983, Return of the Jedi can go kick rocks.

Before we get to why Valley Girl is the best, I will explain why Return of the Jedi is not. See, RoTJ suffers from the same affliction that another excellent movie from 1983, Strange Brew, has: a stellar first half (or in Strange Brew’s case, an excellent opening) but a disappointing second half. If Return of the Jedi basically took place entirely on Jabba’s compound, I might be writing a very different article today, but as it stands? Nope. Valley Girl is better.

I first discovered Valley Girl because whoever was doing VH1’s non-music programming in 1996/1997 was an unsung hero. See, on Friday nights they used to play music adjacent movies, and on one such night, Valley Girl was shown. I stumbled upon this movie nearly towards the end, where a shirtless Randy (Nicolas Cage) was camping on the lawn of Julie’s (Deborah Foreman) house, who had clearly dumped him, and I was hooked. Randy was very handsome, and kind of edgy, and he was the first of many punk rock looking dudes I would lust after for my teens and early twenties.

The thing about Valley Girl is not only is it totally bitching, but it’s consistently great from beginning to end. Additionally, it introduced the world to Nicolas Cage with his first starring role (setting the stage for Con Air to come in just 14 short years,) and also? In the words of our titular Valley Girl, he’s totally hot.

So sit back, put on “I Melt With You” (followed by a chaser of Josie Cotton’s “He Could Be the One”) and embrace the truth you’ve always known in your heart: Valley Girl is the best movie of 1983.

What is it that makes Valley Girl so great? It’s a fairly paint-by-the-numbers romcom centered around Julie, a, like, Valley Girl for sure, OK?! And Randy, who foxy, but also from Hollywood, so like, he doesn’t fit in alright?!

The two teenagers meet one day at the beach, and because Randy has a dorky friend who eavesdrops on Julie’s group of friends to find out where they’ll be later that night, the two meet at a party and sparks fly, but it’s not without its difficulties. Complications ensure because as the Valley Girl tagline puts it: She’s cool, he’s hot. She’s from the Valley, he’s not

See, Julie had just broken up with Tommy (who believes no other Val[ley] dude can touch him) because his “brains are bad news.” So, since teenagers can be dumb sometimes, Julie’s friends pressure her to dump Randy because it’s bad for her rep, and for her to get back together with Tommy, because he’s a shoo-in for Junior Prom King. .

It’s sheer perfection. Just watch this montage, and I’m sure you’ll agree, as montages are the best way to appropriately convey anything:

I also failed to mention that all of Julie’s friends are fairly fleshed out (for a teen romcom movie) and her friend Suzi, played by Michelle Meyrink, is even given a subplot about losing her virginity to the dude she likes but who her step mom likes, also. It’s a whole thing, and honestly? I tried to find a clip of their gettin’ busy scene on YouTube, because that was a very important scene to my 13-year old self, but I couldn’t. Probably for the best but here’s the song it happened to, which I listen to about once a week to this day.

The thing about Valley Girl is that it unabashedly embraces teen girl sexuality in a way that is uncommon and rare. The ladies of Valley Girl are never given any s*it by their peers for wanting to hook up and get down (except by Tommy, but you were told his brains are bad news already, so…) and friends? They hook up, talk about sex, and generally live their lives with no judgement whatsoever. Well, there’s some judgment, but it’s not about sex. It’s about seeing a dude from Hollywood. So grody!

I mean, we all know how this end, right? Randy beats the tar out of Tommy (he had it coming) and then he and Julie escape the prom, presumably to go have sex in the hotel room Tommy rented. You know, typical teenage stuff.

You had to be there.

I haven’t even mentioned Julie’s hippy dippy parents, her dad is played by the original grown up to the 21 Jump Street gang, Frederic Forrest, and her mom is played by Colleen Camp. They smoke pot, let Julie stay out late, and generally try not to harsh their teenager daughter’s buzz. They are, without a doubt, what I wished my parents to be like when I first saw this movie at 13. (Sorry Mom and Dad.)

The thing about Valley Girl is that it handles this all in a way that feels fresh all the way in 2019, even if we’ve seen the “girl meet boy, boy loses girl, boy looks for something to destroy” thing a million times—and we haven’t yet touched on the perfection of the Valley Girl soundtrack:

It cannot be topped, especially by any movie from 1983. (Note: the less that can be said about “Johnny Are You Queer?” the better, though. It has not aged well in the ensuing 36 years since its release.)

All Return of the Jedi has, at least in its back half, is a bunch of weirdo bears that are clearly there to be merchandised. Speaking of which, I wish I had had a “Randy” doll instead of boring “Ken” as a kid. It would have made all the murders/fashion shows my Barbies participated in much more interesting.

There you have it. Valley Girl is the best movie of 1983.