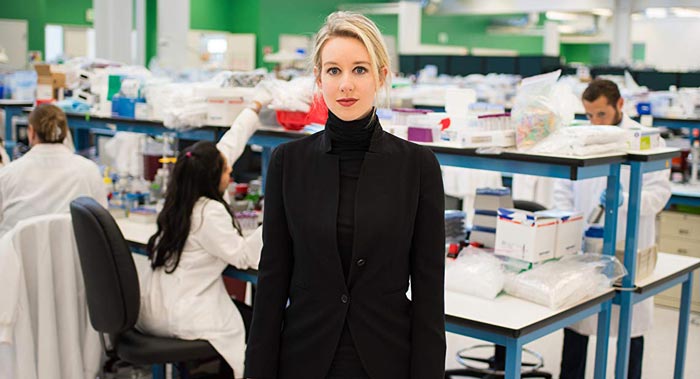 Few true crime stories and tales of Silicon Valley misrule have enraptured us as much in recent years as the tale of Theranos. It all seemed too good to be true: A hot new medical start-up that promised patients the ability to operate hundreds of tests based on a few drops of blood taken from your finger. Say goodbye to big-ass needles and invasive blood drawing. This was the future of healthcare, as endorsed by everyone from the Clintons to Henry Kissinger to Larry Ellison. At the forefront of this revolution was Elizabeth Holmes, a turtleneck-clad wunderkind who had dropped out of Stanford at the age of 19 to begin her own company and show all the naysayers who were boss. By the age of 29, she was being celebrated as the first and youngest self-made female billionaire in America, with Forbes valuing Theranos at around $9 billion. Within a year, that would be revised to zero, as Wall Street Journal writer John Carreyrou uncovered the massive fraud taking place at the near-deified start-up. The blood tests didn’t work, Holmes and her boyfriend/business partner Sunny Balwani were lying to investors, and their much-vaunted ‘Edison machine’ was useless.

In June 2018, a federal grand jury indicted Holmes on nine counts of wire fraud, and her trial is set to take place this August. Thanks to Carreyrou’s wonderful book Bad Blood, the ABC Nightline podcast The Dropout, and Alex Gibney’s documentary The Inventor: Out for Blood in Silicon Valley, the story is more popular than ever. Hulu is already planning a mini-series dramatization of the Theranos scandal, with Kate McKinnon attached to play Holmes. All eyes, however, are on the big-screen adaptation of Carreyrou’s book. Bad Blood has no production date yet but Jennifer Lawrence will play Holmes and Adam McKay will produce. He was originally set to direct it too but has since pulled out. Carreyrou himself recently confirmed that the new director will be Jason Bateman. No offense intended to Bateman or his work but honestly, can we get a little more ambitious with this movie?

This is a story that is all-too-easy to screw up. People tend to get too focused on the oddity of Holmes herself, from the fake deep voice to the Steve Jobs turtlenecks, and overlook the specificities of her machinations and the systems that allowed them to flourish as much as they did. This is a story not only of a highly manipulative and amoral egoist but of an entire industry built on smoke, mirrors, and false idols that has become the backbone of society and modern capitalism. One does not exist without the other. This scandal was easy to mock as the epitome of silicon valley hubris but it also put lives at risk. How do you balance all those precarious elements? More importantly, who could pull off such a feat? We have a few suggestions.

After Hustlers, Lorene Scafaria should have her pick of projects in Hollywood. Every producer in the business should be banging on her door and offering her their high-profile Oscar bait screenplays. With Hustlers, she crafted one of the most fascinating, vibrant, and politically fierce dramas about the current economic crisis and the importance of eating the rich, all anchored by an ensemble of wildly charismatic performances. Her specific gaze and awareness of the source material, coupled with a keen understanding of the tricky morality at play, made for one of the sharpest and most thrilling films of 2019. Here’s a director who would be perfect to take on the glitz and grime of Silicon Valley. Imagine the music choices alone!

With only three movies to her name, Marielle Heller is easily on the route to becoming one of the greats of her generation, or at the very least, one of the true hidden gems of the industry (please be the former, world!) Not only has she made her name through deftly layered adult-focused dramas that tackle often deeply tangled issues, she’s helped to revive the staid biopic and inject it with some much-needed vibrant, as evidenced by both Can You Ever Forgive Me and A Beautiful Day in the Neighborhood. She didn’t just tell the life stories of her subjects; she approached them from a fresh angle that sought to understand not only their motivations but the impact they had on the worlds around them. This makes her perfect to take on Elizabeth Holmes, a fascinating and deeply controversial figure who needs to be handled with far more care and cynicism than your typical biopic subject. If there’s any director who could most accurately capture the way Holmes’s power came from being able to mentally seduce a whole lot of rich old white men, it’s Heller.

The art of the sturdy political drama is an oft-underrated one, especially in Hollywood, where we seem to get dozens of such stories and they seldom rise beyond being ‘just kind of okay.’ Spotlight is a refreshing exception to that rule. Tom McCarthy has made a dud or two in his time (we will never forget The Cobbler) but when he’s on the ball, he’s unimpeachable. The Theranos story needs a razor-sharp dissection of its countless moving parts in a way that takes the material seriously without being overwhelmed by exposition. McCarthy is your man to make that happen.

I think we would all be extremely happy if Rian Johnson decided to just make Knives Out sequels for the rest of his career, but if he fancies a change now and then, we’d be up for seeing how he puts his unique stamp on the Holmes drama. Here’s a writer-director who knows how to handle the utterly ludicrous and make you believe it, whether it’s space casinos or Chris Evans being the enemy of dogs everywhere. His sharp-as-a-tack perception of class and how its divides are ever-widening, be they in a galaxy far far away or at a beautiful murder house, is so desperately required for the Theranos story. Johnson would be able to let the humor of the story shine through without having it overwhelm the undeniable seriousness of these crimes. Plus you know he’d be able to put together one hell of a cast for this. Is there a role available for Daniel Craig to use his Benoit Blanc accent again?

It makes a lot of sense as to why producers wanted Adam McKay to direct Bad Blood, given his late-career resurgence as one of the most notable names in big-screen political satire. He is, however, prone to moments of clumsiness and getting caught up in the message at the expense of the narrative. I think the Holmes story needs a slightly more esoteric touch, albeit still very much within the McKay wheelhouse, so who better to tackle that than I, Tonya director Craig Gillespie? He’s not afraid to go soapy, even as he delves into deeply prickly subjects, mocking the culture around his subjects as much as the villains themselves. I, Tonya is also smartly about media overexposure and how, sometimes, the people reporting on the news can get carried away by the drama to the detriment of their occupations, and boy, was that a major problem with all things Theranos.

Who would you like to see direct the Theranos movie? Let us know in the comments.