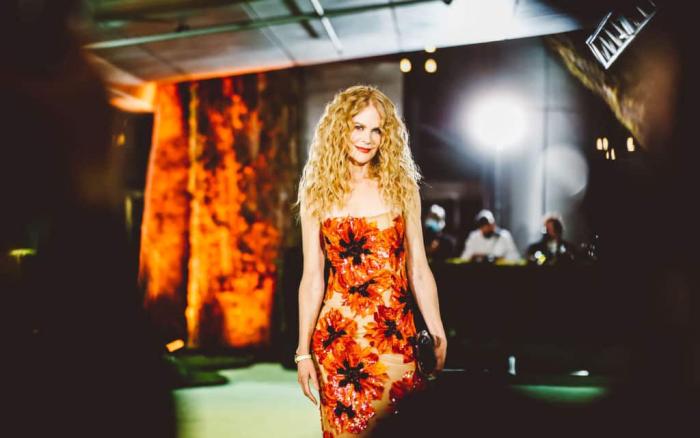 Amazon has released the first teaser trailer for Being the Ricardos, the biographical drama directed by Aaron Sorkin and starring Nicole Kidman and Javier Bardem. It’s a latecomer to this year’s awards season but one that cannot help but be of interest given the subject matter and creative team. A biopic about Hollywood royalty, Lucille Ball and Desi Arnaz, made by The West Wing guy and starring two Oscar winners? I think a bunch of awards predicators just died.

The short and not especially revealing trailer gives us a teeny glimpse of Kidman as Ball recreating the iconic grape stomping scene, but mostly focuses on her voiceover. We do see Bardem as Arnaz, which once again has me wondering if Sorkin knows that Hispanic people and Latinx people are not the same thing.

As Kidman has been quick to note, this is not a recreation of I Love Lucy but the story of Ball and Arnaz, their marriage and the racial barriers they faced, and the ways their personal and professional relationships intertwined. That gives her some leeway when it comes to the obvious skepticism some people have over Kidman playing one of the most iconic women in American television.

Personally, I don’t care much about things like recreating her appearance lash for lash. I think a lot of biopics get too wrapped up in such aesthetics, prizing waxwork copies and bad Vegas-style impersonations over real lived-in acting. I can buy Kidman as Ball, although her voice sounds exactly like Nicole Kidman, gentle Australian lilt and all, in the trailer. I’m curious to see if she can nail Ball’s wit off-screen and her elastic physicality on-screen. Kidman’s great in darker comedies like To Die For but I’ve never seen her as a comedienne, so to speak.

For me, the problem is Sorkin. I think he’s bad at casting his projects — hello, The Trial of the Chicago 7 — and I think his predilection for grand-standing monologues and audience-directed finger-wagging has sunk more than a few of his projects. He feels like an ill fit for this kind of project to me, what with his love of his own voice and inability to write anything that doesn’t sound like Sorkinese. But clearly a lot of people love it, especially Academy voters. So, I imagine Amazon’s hopes for this one are high.

Being the Ricardos will premiere in theaters on December 10 before dropping on Amazon Prime on December 21.