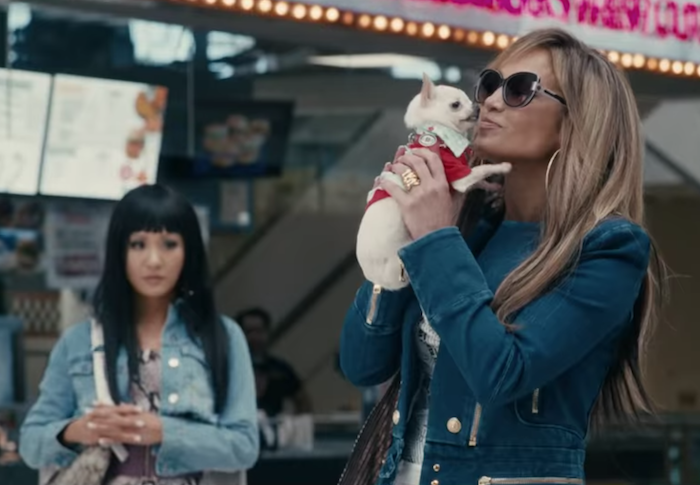 Hustlers was the number one movie in America this past weekend, and for good reason too because it is very good, and also, J.Lo nailed it in every possible way in her role.

The movie is based on this excellent article, first published in New York magazine, but now available at The Cut, titled “The Hustlers at Scores.”

Now, you may be wondering what parts of Hustlers are based in reality and what was just for the movie, and friend, we’re here to help with that. Sit back, put on some “Criminal,” and let’s all revel in Ramona Vega once more:

Per the article above, the real people the characters are based on don’t align with the character names given to them. Understandable, because some of the women mentioned don’t want to be associated with the film (in particular, the woman Mercedes is based on.) In case you were wondering:

Ramona Vega was based on Samantha Barbash.

Dorothy/Destiny was based on Roselyn Keo.

Mercedes was based on Marsi Rosen.

Annabelle was based on Karina Pascucci.

Ramona and Destiny’s friendship was the lynchpin of the movie, and the love they had for each other was real and palpable on the screen—sadly, that was all for show. Samantha and Roselyn were never as close as they were portrayed on screen, and theirs was less of a friendship and more of a business partnership. Rosie, in particular, viewed Samantha as what not to become.

Per the New York magazine article:

This was not a pattern Rosie intended to get stuck in. Not like Samantha, whom she’d come to view as a cautionary tale. She would talk about the classes she took at F.I.T. and the swimsuit line she was starting, but the idea of her getting a straight job seemed about as likely as a vampire becoming a lifeguard. Rosie had ambition. Despite everyone who had indicated to her otherwise — her parents, her boyfriends, the guys who kicked her out of the Champagne Room because they “weren’t feeling her” — Rosie knew she was special.

Unlike in the movie, where Destiny immediately turned on Ramona for a deal, in reality, Samantha and Rosie turned on each other as soon as possible:

The correction officers eyed them with amusement. Even without their hair and makeup, they were a sight to behold, four exotic birds chirping in a cage. “Which one of you is the ringleader?” one asked. “Samantha pointed to me,” Rosie said. “I pointed to her.”

OK, but did Destiny/Rosie Take a Deal?

Yes—this is where the movie and real-life are one and the same. You’ll recall Destiny took a deal as soon as the women were arrested, much to the dismay of Ramona. In real life, Rosie took a deal, and eventually, the other women did too.

All the women were desperate to avoid jail time, and their plea negotiations dragged the case into November, when Karina and Marsi pleaded guilty to conspiracy, assault, and grand larceny. A few weeks later, Samantha Barbash pleaded to the same charges. Their sentencings are scheduled for early in the New Year. In the meantime, Karina has a new retail job; Samantha is still working on her swimsuit line.

What about Samantha Barbash?

One of the big discrepancies that the real Ramona, Samantha Barbash, is contending is that she insists she was never a dancer at a strip club, directly contradicting the original article:

Samantha, born Samantha Barbash, was one of Hustler’s top moneymakers. A single mother from the Bronx, she’d started dancing at 19, and, like an ornamental plant purposefully stunted to conform to a certain ideal, she’d been shaped by the industry in which she grew up. Her body was Jessica Rabbit curvy, her lips Angelina Jolie puffy; her hair, which concealed tattoos of a cascade of stars running down her neck, was Cleopatra black. Buried within this ultrafeminine package was a mercenary streak worthy of Gordon Gekko.

By the time Rosie met her, Samantha was in her 30s — ancient by stripper standards — but she’d maintained her supremacy in part by cultivating younger dancers.

“We’re putting a stop to it because she’s actually misrepresenting me,” Barbash, 45, said of J.Lo. “I was never a stripper. “It’s defamation of character.”

Barbash, who worked as a hostess at Scores gentlemen’s club in Chelsea, said the team behind the flick failed to get permission to use her life rights.

Barbash, however, seems to have gotten on board the Hustlers train since the NY Post article publication in April, recently posting pictures on Instagram embracing her ties to the movie:

There you have it—personally, I’m glad they added in the element of friendship to Destiny and Ramona’s relationship because it was my favorite part of the movie. My second favorite part? J.Lo’s entrance. Duh.