Don’t believe the hype: Not all publicity is good publicity, and Cuties is not what it might seem.

In a few short days, the French drama Mignonnes (retitled Cuties in the U.S.) has swiftly gone from little-known Sundance selection to the center of a sprawling social media firestorm. The upcoming Netflix release has inspired understandable outrage along with threats of boycotts, a cancellation petition, allegations of pedophilia promotion, and harassment of the movie’s maker. Yet amid subtweets, scorn, and QAnon propaganda, you might be lost about what all went down.

Allow us to break it down.

It began with Netflix’s promotion of Cuties, which is set to hit the streaming service on September 9. Netflix released a poster for Cuties, which shows four young girls in bootie shorts and crop tops, posed provocatively. Their logline for the film read, “Amy, 11, becomes fascinated with a twerking dance crew. Hoping to join them, she starts to explore her femininity, defying her family’s traditions.”

Netflix WTF IS THIS pic.twitter.com/v4FjZkH7K5

Many were outraged at Netflix for promoting a film that seemingly promotes the sexualization of prepubescent girls. Some Netflix users threatened to cancel their subscriptions over Cuties. A petition was started, calling for Netflix to remove this “dangerous content” from its service. Netflix was accused of promoting pedophilia. Their accusers were not only concerned parents but also QAnon conspiracy theorists, who used the Cuties poster to promote their beliefs.

Many went on to attack the film in any way they could. Posts denouncing Cuties and Netflix were made on Reddit, Twitter, Youtube, and Facebook. On Rotten Tomatoes, users showed their disgust by flooding the Audience Score with one-star reviews that read, “Disappointed with society,” and “if I could give it a 0 I would.”

Following this outcry, Netflix pulled the offending poster, replacing it with promo images including those up top and below. The description of the film on the site now reads, “Eleven-year-old Amy starts to rebel against her conservative family’s traditions when she becomes fascinated with a free-spirited dance crew.” 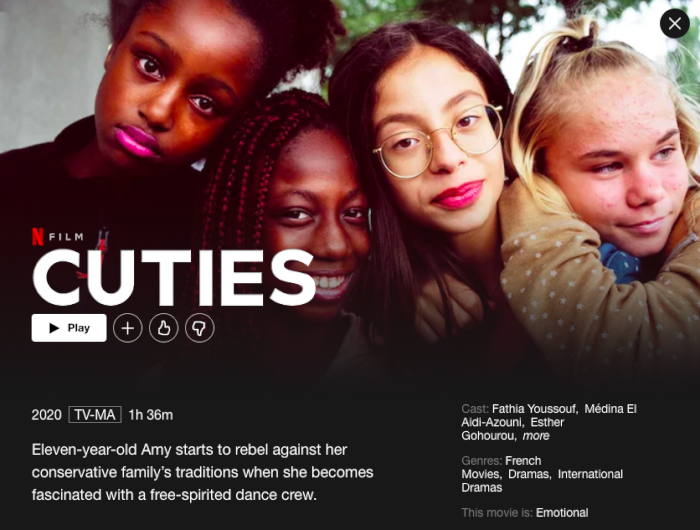 On Twitter, the distributor also offered an apology, admitting that the initial promotion materials were “inappropriate.”

We're deeply sorry for the inappropriate artwork that we used for Mignonnes/Cuties. It was not OK, nor was it representative of this French film which won an award at Sundance. We’ve now updated the pictures and description.

In replies, many of the comments mocked Netflix’s effort to rebrand, insisting the damage was done. “The entire film is inappropriate,” remarked one user.

However, as Cuties is not on Netflix yet, those posting from the U.S. are speaking about a movie they probably have not seen.

Cuties was seen by attendees of the 2020 Sundance Film Festival, where the French feature made its world premiere. Among them was Thor: Ragnarok star Tessa Thompson, who took to Twitter to defend the film and its award-winning writer/director Maïmouna Doucouré.

Disappointed to see how it was positioned in terms of marketing. I understand the response of everybody. But it doesn’t speak to the film I saw. https://t.co/L6kmAcJFU1

Others noted a stark difference in how the film was marketed in France by the distributor UniFrance, versus Netflix’s promotion in the United States. The popular tweet below, shows both posters side by side:

Ok so the Netflix Cuties movie.

I did some research and the director is a French Senegalese Black woman who is pulls from her own experiences as an immigrant and comments on the hyper-sexualization of preadolescent girls.

But look at the original poster vs the Netflix one pic.twitter.com/JVbaa5iueG

The French poster (with the untranslated title Mignonnes) features a still of four young girls gleefully running down a street, swinging shopping bags and sporting flashy bras and panties over their clothing as if they’re playing dress-up.

Giving further context to the film, here’s the trailer from UniFrance:

Cuties’ release in France on August 19 has spurred no noticeable controversy.

Those who have seen the film have warned that Netflix’s marketing distorts its focus. I wanted to see for myself, so I watched Cuties via press screener. I can confirm: Cuties does have scenes of 11-year-old girls twerking and wearing revealing clothing while doing so. However, Cuties is not promoting or glamorizing the sexualization of young girls. Presentation is not the same as promotion. Instead, the film critiques these choices by exploring why girls might engage in such behavior and how they feel about it.

The film centers on Aminata Diop (Fathia Youssouf), or Amy to her friends. She is an 11-year-old Muslim Senegalese immigrant who has recently moved into a housing project in France. The women of her community impress upon Amy that her role is to be a good daughter to her mother, and eventually an obedient wife to her husband. No mention is made of Amy being anything for herself. Then, she meets the Cuties.

These are four French girls who refuse to be silent, obedient, and modest. They holler, flirt, fight, and dance however they want. To Amy, who feels invisible, their ability to be seen is a power she craves. How they get that power doesn’t matter to her. When she realizes they idolize the twerking teen crews who dominate the local dance scene, Amy dedicates herself to stealing every move to impress her friends.

These girls are not twerking for the attention of boys or men. Chiefly, they dance for each other and for floods of likes on social media. They—like many kids who crave attention and rebellion—are recklessly unconcerned with what kind of attention they get. That is until one in their crew goes too far. Then, Amy has a rough revelation, having to decide what she wants and who she wants to be.

Cuties is a coming-of-age story in the vein of Thirteen, Fish Tank, and Girlhood, offering scenes which are knowingly unnerving to it adult audience. It is not intended for children. With Cuties, Doucouré explores the mixed messages girls are given. They are told to be modest lest they attract the wrong kind of attention. However, these girls get no attention unless they act out, mimicking the behavior they’ve seen in older, bolder women. Doucouré has created a purposefully provocative drama to urge her adult audience to interrogate their own understanding of girlhood in a world that both celebrates and condemns female sexuality with unmatched frenzy.

Sadly, what her film actually has to say is being lost amid the outcry, some well-intentioned, some opportunistic. By refusing to see Cuties, those demanding its “cancellation” are missing its point. Ironically, the film tackles many of the issues raised by those who hated Netflix’s poster.

Doucouré has not commented on Netflix’s marketing or the ongoing social media uproar. She is no longer on social media. According to Pop Sugar, Doucouré deleted her accounts when those angry about the Netflix poster poured harassment on her. However, Doucouré has spoken previously about the film’s inspirations and her intentions. (Recommended reading: Screen Daily’s interview out of Sundance.)

Currently, Cuties is still slated to debut on Netflix in the U.S. on September 9. However, this scandal could hurt Netflix’s reputation with international filmmakers.

Netflix bought Cuties ahead of its Sundance debut, which must have been exciting news for Doucouré. As a foreign-language film with no stars, Cuties had some serious obstacles in attracting U.S. distribution. Though Netflix has faced criticisms of damaging traditional cinema with its streaming platform, it’s been a boon for daring filmmakers. Some have funded costly dream projects, like Roma, The Irishman, and Okja. Others have seen their eccentric indies get notice because of Netflix, like Freaks, The Breaker-Upperers, and See You Yesterday.

Doucouré is a Black, female refugee who channeled her experiences into a challenging film that shines a spotlight on the messiness and pitfalls of modern girlhood. The acquisition of Cuties could have been a story of how the controversial distributor was uplifting the voices of too-often-marginalized filmmakers. Instead, Netflix’s awful marketing campaign has tainted Cuties’ Stateside. And why?

Netflix has not commented on the reasoning behind the poster design. However, I wonder if the team behind it was aiming to spark the kind of ire Dance Moms and beauty pageants have in the past. Perhaps Netflix’s marketers hoped to tap into that debate, attention-grabbing but familiar. A dash of controversy could draw notice to a title that doesn’t have the hook of big names, demographic breadth, or flashy feel-good vibes to it. However, if this was the case, it was a gruesome miscalculation that ignored the mounting concerns over the sexualization of children. Regardless of the reasoning, this marketing mistake makes Netflix look a fool, but could cost Doucouré far more.

← Executives On 'The Ellen DeGeneres Show' Knew Of Toxic Workplace Allegations Back in 2018 | 'Lucifer' Season 5, Part 1 Review: What You Truly Desire Is More Tom Ellis, Right? →