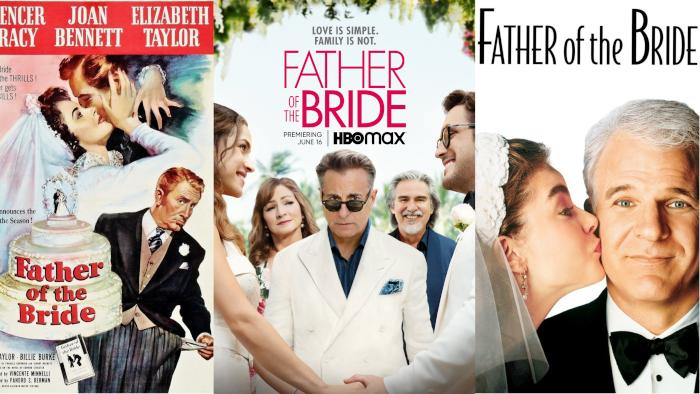 Every Version of 'Father of The Bride' Compared

Because my timing is just impeccable, I am once again stealing something from a woman who is more talented than me. This time, from one of the Top 5 YouTube channels, Be Kind Rewind and her comparative analyses of different adaptations of classics, which by now have become a yearly fixture, what with Hollywood being so inventive. But since I don’t have her mastery of film theory and history and I’m just powered by a shot of coffee, expect something closer to Buzzfeed than her peer-reviewed level essays.

When the trailer for 2022 remake of Father of the Bride came out, now streaming in HBO Max, I predicted it would have the entirety of Latin America tuning in. They already had us at the Latine Avengers assembly of Andy García WITH Gloria Estefan, global stars-in-waiting Isabela Merced, Adria Arjona, and Diego Boneta, plus beloved character actors like Rubén Rabasa. But the trailer also looked good, smart, emotional, and most importantly, devoid of stereotypes. Or at least, not the stereotypes that are imposed on us, but those subtle differences in customs that we Latines are obsessed with picking apart. It’s all part of the fun.

The problem is … I never liked Father of the Bride, the version from 1991 that is. You know those movies that are so boring that you can remember almost everything about them? That’s what they did with a cast that included Steve Martin, Diane Keaton, and Martin Short, with Nancy Meyer writing the screenplay. Let’s get that out of the way: Father of the Bride 1991 is the worst of the bunch and it isn’t even close.

To get a better picture, after watching Father of the Bride 2022, I decided to watch the first adaptation, from 1950, starring Spencer Tracy, Elizabeth Taylor, and Joan Bennet. In doing so I had to deprogram a couple things from my mind: My love-hate relationship with Romantic Comedies in general, and in particular, my gut-level disdain for the institution of weddings, when these movies are all about people who aren’t chill about weddings.

But even controlling for my own biases, I realized that these movies have to deal with a major structural problem: They are focused on what happens after a romantic-comedy end. Planning a wedding is a great set-up for comedy, being one of the silliest rituals that we as a society have collectively agreed is significant. But these movies are constrained by a premise that wants to make fun of the silliness of weddings, but gently enough not to be too harsh on the whole affair, lest the General Public start questioning the institution. One of weddings that is; there is barely a mention about the challenges of marriage in the first two versions.

Let’s break it down into useful categories.

The Father of the Bride:

Billy Herrera (Andy García), George Banks (Steve Martin), and Stanley T. Banks (Spencer Tracy) have all been portrayed as alternates of their actors usual personas: Tracy plays it by pretty much inventing what we now call “dad energy,” Steve Martin dips into the neurotic goofball, and García plays it by doing a balancing act of self-conscious virility and devoted affection, proper of Good Latino Fathers. In that sense, it’s García who stands apart from his goofball predecessors, bringing his patrician gravitas to the character.

This, of course, helps take the story of the newest version into a direction the other two never explored: The father figure examines his emotional shortcomings and sense of entitlement, even though he has been there as a husband, father, and provider. Among Latino men of a certain age, the fact that the movie focuses on this is a big conversation starter, more so if embodied by that towering figure of Latino masculinity that is Andy García, cut from the same cloth as Humphrey Bogart or Marcello Mastroianni. Understandably, this reflection on masculine vulnerability isn’t much of an issue in the 1950s version, you know, because of the decade, but also because Tracy manages to make Banks an open book with his subtle expressions and the tone of his voice. It’s the 1991 version that completely sidesteps being critical of the father. Other than Martin’s moments of slapstick, you’d imagine that one was made in the 50s.

The Mother of the Bride:

You know I’m just going to say it’s Gloria Estefan’s Ingrid Herrera who is the most interesting version of the mother and wife, which is no disrespect to Joan Bennett’s nuanced and funny journey, as she goes from being exasperated at her husband to eventually sharing his exhaustion at the proceedings. But in the 2022s version, we start with Billy and Ingrid on the verge of divorcing and attempting to maintain the facade in front of their family until the moment her daughter ties the knot.

But being Ingrid is the one who wants the divorce, it changes the dynamic between these main characters in the movies: They are now in a mid-life crisis, not a settled couple gearing up for retirement or as over-40 parents to a young child. Estefan does an amazing job at portraying a woman who is as sure as she can be. Both Bennett and Estefan’s performances give you an idea of just how wasted Diane Keaton was as the mother in the 1991 version. They took Diane Freaking Keaton and they turned her into yet another of those supportive WASP wives that populated movies from the era.

This is unfair, who could compete with an Elizabeth Taylor in her first adult role and a year away from A Place in The Sun?. Hindsight is 20/20, but even then I think people knew Elizabeth Taylor would become Elizabeth Taylor. Who could you cast in this day and age whose career could be in the same place as Taylor’s and also happens to be Latin … oh right, Ana De Armas.

Neither Adria Arjona or Kimberly Williams, accomplished as they have been so far, do what Taylor did with a character that is ultimately unwritten. The problem with the Bride in these movies is that we only see her through the eyes of dad, so she is never portrayed as a three-dimensional woman, she is always an angel in reflection of the values of their times: Arjona’s Sofía is a brilliant NYU lawyer heading to work at an immigrant’s NGO; Taylor’s Kay is angelic, but at least she is allowed to be moody and capricious; and Williams’ Annie is … getting married at 22 in the 90s? Seriously Nancy?

The Rest of the Family and the In-Laws:

Father of the Bride 2022 knew they were going to strut their way into winning this; the others barely even cared to make them relevant. It only makes sense; they were centered around WASP-ish families. It wouldn’t be a Latino story without a noisy, chaotic, and charming extended family, the story demanded it and they nailed it … they just didn’t give them enough running time. In keeping with the metaphor of extended families, the future in-laws are super-wealthy, self-made, and flashy Mexicans, contrasting with the also wealthy, also self-made but more subdued Cuban-American Herrera family, a main driver of the comedy, but also where I think this latest adaptation wasted its biggest opportunity, we’ll get to that later.

The main source of comedy in every adaptation, here comes Martin Short to save the day. But Father of The Bride 1950 wins this round here by making every single character involved in the planning of the wedding a delightful trainwreck, there only to further complicate things for the hapless Mr. Banks.

This is just me being a nitpicker, but I think the reason these movies are one tier below other Comedy classics is that they miss out on at least one element that could’ve improved them by 27%, assisting with the fact there are no real stakes at play. In the first one, it’s obvious: Katharine Hepburn should’ve played Mrs. Banks and made half the movie her and Tracy’s characters going back and forth bickering about their future son-in-law and the wedding expenses. In 1991’s adaptation … I made it pretty clear that it’s too boring, and it’s boring because it lacks bite: They could’ve done it as a comment on Boomers vs Gen-Xers on their approach to marriage, or go further into the original’s satire of the wedding industrial complex. In the end, is so bloody sanitized that it doesn’t come across as a light-hearted Romatic-Comedy, but as Reagan-era propaganda or something.

When it comes to this new version, they should’ve focused more on the comedy of mannerisms side of it. There’s so much comedy that can be derived from those minor differences and petty rivalries between different Latino communities. In particular, they should’ve bought the rights to Meet the Parents and done a two-in-one remake. To cast someone as charismatic as Diego Boneta and then bench him in the role of the dreamy, perfect guy is a waste of money and talent. We could’ve had so many moments of García and Boneta’s characters bouncing off of each other, the latter with his woke Millennial attitude and the former with his I’m The American Dream ethos. I guess we can hope for more of this with the inevitable adaptation of the sequel.

In all, I think the 1950s version is much better at being a Romantic Comedy, while the newest adaptation works when it approaches a dramedy tone. But they just can’t sell me on the premise of weddings being an interesting set-up for comedy. Because My Big Fat Greek Wedding did it much better, although Spencer Tracy’s does have a hilarious dream scene straight out of Buñuel.

Final verdict? Watch Son Of The Bride instead. An absolute classic of Argentinian Cinema, directed by Juan José Campanella and starring Ricardo Darín. That’s the best Romantic Comedy centered around a wedding.


← 'Beavis and Butthead Do the Universe' Is the Hot Pockets of Movies | How Many More Episodes of 'Riverdale' Can There Possibly Be in Season Six? →