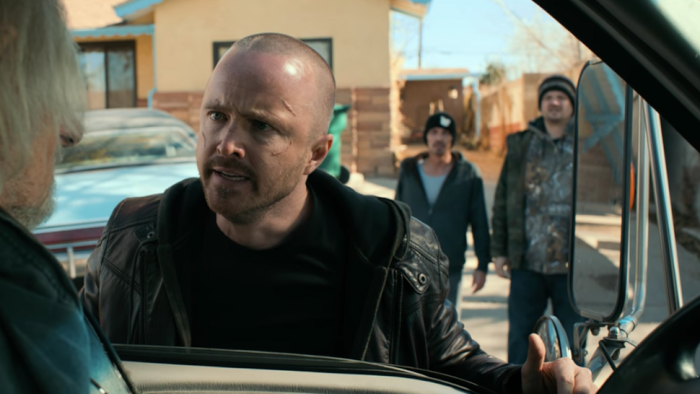 I have not read any reviews of Netflix’s El Camino, the Vince Gilligan sequel movie to Breaking Bad, but I’ve seen a number of headlines and Twitter conversations debating over whether it is necessary, while also frequently labeling it a “postscript,” which feels in some ways diminishing, like El Camino is a fun little post-credits scene you can stick around and watch if you don’t need to rush off to the bathroom.

Having watched El Camino a couple of times over the weekend, I am not of the mind that it is necessary, but my threshold for necessity is basically a defibrillator for a man whose heart has stopped. Eating an entire Thai-chicken pizza is not necessary, but if it’s sitting in front of me, that’s exactly what I’m going to do. Qualifying a movie as “necessary” or “unnecessary” needlessly raises the stakes on a piece of entertainment that can be consumed on your smartphone while riding on the subway train. The only “necessary” piece of entertainment I’ve ever seen were all those MacGyver episodes that taught me how to escape from a tight situation with bubble gum and pantyhose.

I am of the mind, however, that El Camino is the ending that I never realized that Breaking Bad was missing. It’s only in light of the events in El Camino that I realized what short shrift Jesse Pinkman got at the end of Breaking Bad. Breaking Bad is series about a high-school chemistry teacher and a former student turning a small meth manufacturing operation into an empire, but in some ways, Jesse fell by the wayside in the final season. It became the Heisenberg show, narrowly focused on the hubristic ruin of an Ozymandias-like character. Jesse, meanwhile, was barely even a plot device. Most of his actions in that final season were in relation to Walt, and in between the death of Hank and the death of Todd, everything with Jesse happened to him instead of by him.

El Camino corrects that in a major way, giving Jesse an opportunity to make his own future instead of letting his future happen to him. Much of the story is told through flashbacks, but given the way those flashbacks so seamlessly fill in gaps on Breaking Bad, El Camino ends up feeling less like a “postscript” and more like the final two episodes of the series. “Felina” was the final chapter in Walter White’s life. El Camino closes the book on Jesse Pinkman.

Many of the returning characters have changed physically over the last six years, but Vince Gilligan picks up right where he left off, both in terms of the story and location, and in the way in which he tells it. It begins with a flashback set on the Breaking Bad timeline nearly halfway through the fifth season. Jesse chats with Mike on the riverbank where Mike is eventually shot and killed by Walter White, and Mike puts the prospect of moving to Alaska in Jesse’s ear (which explains why, later in the fifth season, Jesse requested that Saul use The Disappearer (RIP Robert Forster) to relocate him to Alaska).

That becomes Jesse’s motivation in El Camino: To essentially turn back time and jump in the van to Alaska that Jesse bailed on in 11th episode of the fifth season. 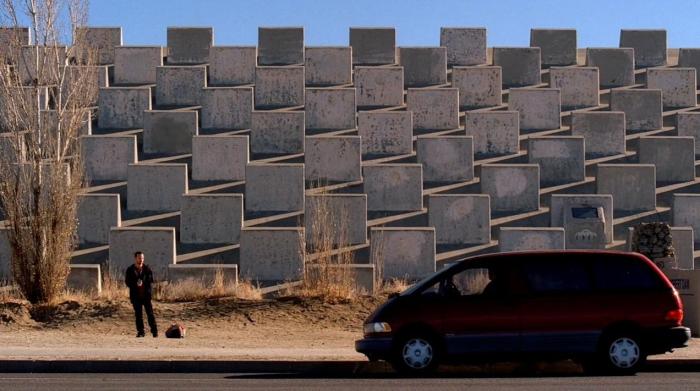 To do so, however, he’ll need money, and thanks to another flashback in which we learn that Todd took Jesse back to his apartment to help him dispose of a body, Jesse knows there’s a lot of loot squirreled away in Todd’s apartment. Todd steals every scene he’s in here, reprising his almost lovable psychopath, revealing that he took Drew Sharp’s tarantula back to his apartment and kept it as a pet and had a snowglobe made of he and Lydia drinking tea, because that’s how messed up in the head Todd is. Jesse Plemons singing “Sharing the Night Together” and giving the honking motion to a passing 18-wheeler while driving a dead body out into the desert has to be one of the most hilariously dark moments of Breaking Bad’s entire run.

Before he returns to Todd’s apartment, however, Jesse pays Skinny Pete and Badger a visit to collect his thoughts, shower, and dispose of Todd’s El Camino — it’s more than fan service, however, Badger and Skinny Pete also give Jesse the stacks of cash that Walt gave them in exchange for information in “Felina.” He uses that money and Skinny Pete’s car to execute his mission, only to have it interrupted by a couple of Uncle Jack’s associates also looking to inherit the wealth left behind in Todd’s apartment.

I won’t say much more than that about the substance of the film, except to note that The Disappearer does return, along with a few other expected cameos (and one slightly surprising one), and that Jesse’s climactic finale in some ways mirrors that of his mentor, Walter White, illustrating how much the student has learned from the teacher.

In the end, El Camino is not a major departure from Breaking Bad and ultimately that is to its credit. Gilligan does not reinvent the wheel here, so much as he moves the end of Breaking Bad from one natural stopping point to another natural stopping point while delivering new details that serve both the story he’s telling her and enriches the story he’s already told. It’s not that different than what he and Peter Gould have been doing for four seasons of Better Call Saul: They have a remarkable affinity for taking a moment or a snatch of dialogue from a scene in one episode and turning it into another storyline, but always doing so within the confines of his characters and their motivations. Is it necessary? No. Is it a well-observed, smart, and entertaining extension to an already brilliant series? Absolutely. More importantly, however, is that Jesse gets his own story, one in which he puts to use all of what he learned in the previous five seasons to blaze a path toward his own future. I didn’t realize that Breaking Bad needed a different ending, but I’m so glad that Gilligan gifted this one to us.