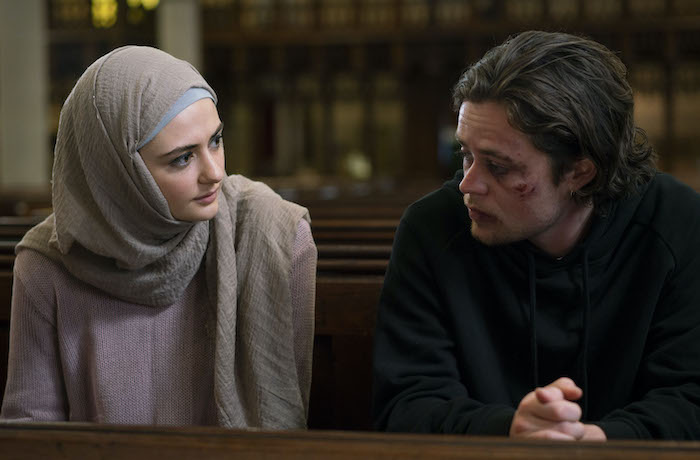 An epigraph five minutes into Paul Ireland’s retelling of Measure for Measure flaunting what appears to be the default Premiere Pro titling font isn’t the first warning you’re in for a bit of a slog, but it is the point at which I really gave up hope.

Within the oeuvre of Shakespeare, Measure for Measure sits at the border between his comedies and so-called “problem plays.” Perhaps uncomfortable with occupying such a liminal space, Ireland decided to remove all the comedy, creating a ponderous tale leeched of any joy or energy. Even the colors are coolly desaturated, doubling down on a wan, overcast quality that is almost impressively draining to watch. It’s an energy vampire of a movie.

The latest retelling to decide that modernizing the Bard means gangsters—thanks for that, Baz Luhrmann—Ireland’s take on Measure for Measure centers a star-crossed love story that takes far more cues from Romeo and Juliet. The young lovers in question are Jaiwara (Megan Hajjar), a Muslim woman who fled her war-torn home country as a girl, and Claudio (Harrison Gilbertson), an aspiring musician, both of whom live in a working-class housing estate where aging white Australian crime-lord Duke (Hugo Weaving) faces a rival outfit of Muslim immigrants run by Jaiwara’s brother, Farouk (Fayssal Bazzi). After Claudio saves Jaiwara from becoming a victim of a racist shooting spree, the two strangers spend the day wandering the city, developing a romance that goes from zero to “I’ll die without you” stupidly fast. Shakespeare at least had the common sense to age Romeo and Juliet such that pubescent hormones could take the brunt of the blame.

Anyway, Duke decides to get out of dodge following the shooting to let things cool down, leaving unhinged deputy Angelo (Mark Leonard Winter) in charge; Angelo is an awful person but you know he’s supposed to have some nugget of goodness deep down because he likes feeding ducks at the park. Farouk finds out about his sister’s romance and frames Claudio for drug possession to get him locked up. Claudio tells Jaiwara Duke can help, but to get to him she must go through Angelo, who says he will only pass the message along if she gives him her virginity in exchange. Because of various character and narrative modifications, these various plots unravel in ways that feel decidedly triter and more convenient than the Shakespearian original.

This film really only holds potential interest to staunch devotees of the Bard or Hugo Weaving, who not only brings far more gravitas to his role as a sorrowful gentleman criminal than the script really warrants but also manages to annunciate his words so that you can consistently understand him. Most other scenes feel like they’re going for Shakespearian mumblecore.

For fans of the Bard, the new Measure for Measure doesn’t represent a delight so much as a strange cultural artifact that might potentially be of intellectual interest. While several forced, otherwise inexplicable narrative beats owe their existence to the film’s Shakespearian foundation, the movie’s modifications to the original tale only make it more befuddling for those well versed in the Bard. Of all possible changes that could be made to streamline things, Ireland chooses to merge two main female characters such that the roles of Claudio’s betrothed and sister are mashed together into the character of Jaiwara. In general, the changes made to the story have the unfortunate side effect of coming across like the filmmakers looked at a play written in the 17th century and thought, you know what, this has way too many women in it, we only really need one, you know?

Even though their relationship develops in a contrived way, the leads do have some chemistry. Hajjar, in particular, coaxes an impressive degree of nuance from a limp fish of a script, but they’re ultimately actors, not miracle workers, and this script means well but tanks pretty hard.

I’ve made several digs at the script at this point so I feel I should substantiate these claims. Measure for Measure has the sort of writing where inane space-filling conversations about comfortable chairs and babies smelling weird are punctuated by roundabout aphorisms that sound significant until you give them a moment’s thought. The pithy maxim at the heart of that comfy chair conversation, for example: “people who don’t know where they are don’t know who they are, they’re barely people at all.” Like… what are you even trying to say, my dude? Care to elaborate?

Overall, Measure for Measure kind of tries to say interesting things. Unfortunately, it veers far enough from Shakespeare to not feel especially relevant on that front, but at the same time sticks too close to the Bard to really say much about the contemporary issues it acknowledges in a blandly surface level sort of way.

Measure for Measure is available on PVOD.

← Reddit Asks For Any Story Users Want To Tell, Leading To Some Weird Tales | Review: 'Mulan' Flattens Its Titular Character into Yet Another Supercharged Superhero →