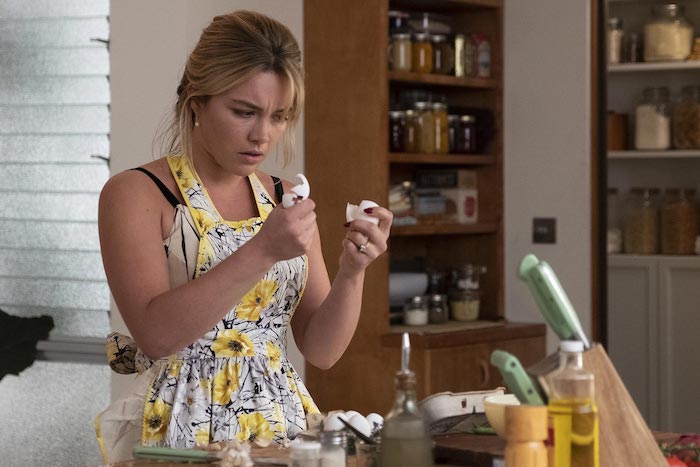 Don’t Worry Darling, the sophomore directorial effort from Olivia Wilde, opens with a bunch of white people being messy. Yes, a few of the actors are people of color, but the characters are white. If you know what I mean, you know what I mean—if you don’t, I can’t explain it. It just is.

Anyway, it’s peak ’50s, more-’50s-than-the-’50s, first-episode-of-WandaVision-’50s, and a bunch of drunk women compete to see who can balance a tumbler of bourbon on their head the longest, while their equally drunk husbands cheer them on. One woman trips, setting off a chain reaction that leaves only one wife standing (Bunny, the alcoholic-in-a-fun-way neighbor, played by the director herself). Everybody proceeds to imbibe even more alcohol; one guest pulls out a cigarette and is promptly told off by the hostess for smoking inside because she doesn’t want to have to try to clean the ash out of her white carpet. You just spilled half a bottle of bourbon on your white carpet, what are you even talking about? I thought at this point, what is this movie?

Contrary to the opinion of Harry Styles, as expressed at the messiest festival premiere since that time Lars von Trier said he vibed with Nazis during Melancholia’s Cannes press conference, Don’t Worry Darling does not feel like “a movie,” “a go-to-the-theater-film movie,” it just feels like a mess.

Of the gaggle of drunk couples, Don’t Worry Darling centers on Alice (Florence Pugh) and Jack (Harry Styles). They are the smuggest marrieds to ever marry; they don’t even really have conversations they just make eyes at each other and then have sex on the closest available surface as soon as they have some semblance of privacy. Like all the men in the Mayberry-by-way-of-Twilight-Zone desert oasis town/compound/cult called Victory, Jack is employed by the super-secret Victory Project working in “the development of progressive materials,” while Alice is a housewife. The mastermind behind all this is their intrepid leader, Frank (Chris Pine), the prophet/guru/bossman who oversees his flock with his beautiful wife Shelley (Gemma Chan) at his side. Shelley supports the cause by teaching all the women of Victory mandatory ballet classes in arguably the most pointless subplot of this generally jumbled movie.

While Jack is gunning for a promotion and fully drinking the Victory Project Kool-aid, the shiny surface of mid-century domestic bliss starts cracking for Alice. She is haunted by an earworm of a tune she can’t quite place (and hums it constantly—yes, it does get annoying sooner rather than later). She also starts having nightmares about her and her housewife friends doing a frenzied nightmare Busby Berkeley routine.

Don’t Worry Darling is at once exactly the overly derivative trifling nonsense you might suspect based on promotional materials—a bland and overly convoluted rehash of The Stepford Wives, or, alternatively, white lady Get Out (more accurately, white lady Antebellum, but thankfully most people haven’t seen that one)—and yet also so much worse.

Booksmart was a compelling first feature; Wilde clearly has the capacity to put a solid film together, as does screenwriter Katie Silberman, who penned both Wilde’s debut and this disaster. However, what becomes painfully clear very quickly in their sophomore collaboration is that neither appears to have any aptitude at all for the thriller space. Scenes that should be tense and chilling, where even the base concept has significant potential, consistently do not work; the pacing, the timing, and the way in which these scenes are shot consistently cuts tension instead of building it. In the crowd I saw the film with, moments that were supposed to cause chills instead inspired spluttering laughter—and not just a few outliers, to be clear. A theater full of people cracking up over scenes that were absolutely not intended to be funny.

This might be the time where I would question some of the choices made by the cinematographer Matthew Libatique—while individual shots are consistently striking to look at, they often fail to service the film on the level of actual visual storytelling that might support either the narrative or the desired tone—or editor Affonso Gonçalves, but per Olivia Wilde herself, “you know, if a movie is bad it is the director’s fault […] It’s truly the director’s fault.” Also, Libatique and Gonçalves both have credits speaking to their capabilities within the horror/thriller space, doubling down on Wilde’s point. (She’d certainly better hope studio execs don’t feel the same way.)

There is so, so much about this film that does not work. The plot is at once overly convoluted and dragged out, failing to set up major turning points while wasting time on bafflingly pointless subplots. The acting is all over the place. Florence Pugh is incredibly skilled and does what she can to try to carry this disaster single-handedly across the finish line. Chris Pine continues to be delightful enough that I still look forward to seeing him even though I can’t recall the last time I saw him in something actually good. And then there’s Harry Styles. As it turns out, his acting capacities are incredibly limited when he needs to have actual dialogue and convey a character arc more complicated than “try to survive Dunkirk.”

“Sophomore slump” fails to encompass the badness of Don’t Worry Darling. “Sophomore cratering” or perhaps “sophomore pratfall” get closer to the mark. The loss of alliteration is regrettable but necessary to convey just how blundering Don’t Worry Darling is, a poorly articulated, stale attempt at social commentary that only entertains by accident. It is a film that will only be remembered, if at all, for an avalanche of petty behind-the-scenes drama and memes of Chris Pine disassociating.

And that will be all it deserves.

← Trailer: Brendan Fraser Stars in the First Teaser for Darren Aronofsky's 'The Whale' | Wordle Now Has an Editor; She Is Making a Slight Change →