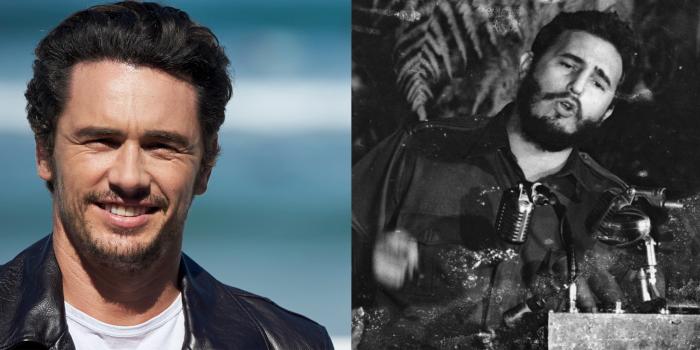 Do We Need To Explain To You Why Casting James Franco As Fidel Castro Is Wrong?

The short of it is this: There is a semi-indie movie in pre-production called Alina of Cuba, a biopic based on Alina Fernández life, the love child of Fidel Castro and now an outspoken exilee and dissident. I say “semi-indie” because this doesn’t look like a small movie for the standards of Spanish-language productions, being helmed by journeymen Spanish director Miguel Bardem, who has helmed several big-scope projects over the last two decades. The movie made waves recently when they announced James Franco had been cast as Fidel Castro…

There are so many levels in which this is wrong. Let’s preface with what King John Leguizamo had to say. He didn’t mince words:

Leguizamo expounded further in another video, explaining how this takes us back to the times when no Latin roles were played by actual Latin actors, even the white or white-passing ones. He also did a pre-emptive “no disrespect to James Franco,” because an actor of color is more likely to get canceled by the studio system for calling out a white actor than a white actor actually getting canceled.

Let’s get this over quickly: James Franco nabbing this role is further proof that cancel culture only exists for beloved Netflix series in their second season or on HBO Max. I don’t think you could call this his eventual comeback role — this is certainly not going to become the Big Biopic on Fidel — but it’s still a higher profile role than he deserves. I mean, it’s not like he is a once-in-a-generation master of range. What the hell were they thinking?

According to one of its producers in the press release for Deadline, it’s because James Franco looks “Hispanic enough”:

To get there on such a tough look to cast, we used Fidel Castro’s ancient Galician heraldry as our focal compass, and then combed through the entire ranks of actors with Latin roots in Hollywood to find someone who has a similar facial structure. In executing a close search into our hopefuls through the eye of Spanish and Portuguese genealogy which the Galicians held, we found that James, by far, had the closest facial likeness of our Industry’s leading actors, meaning that the focus would be to build out his character accent and we’d have a stunning on-screen match to intrigue audiences and bring the story to life with true visual integrity

It is true that Fidel Castro was the son of an immigrant from Galicia (who had previously fought for Spain in the Third War of Independence/Spanish-American War), and that there is a shared linguistic heritage between Galicia and Portugal. But this is like casting an actor from Minnesota to play a Swedish-speaking role just because of the Nordic ancestry in the place. Also, if physical resemblance is the benchmark, well:

I really don’t want to dip into the Discussing-Israel-and-Palestine-level shitstorm that is talking about race and whiteness in Latin America, but for once, the case is self-evident. Yes, within Latin America’s hierarchical systems of race and class, Fidel Castro was a white man, a relatively privileged one given his father’s business acumen. But also, his father came from a poor rural background, and in the Spanish-speaking world, rural Galicians are our equivalent of the hillbilly.

None of these are nuances that a non-Latino actor could possibly be able to convey. Fidel Castro is an iconic figure in Latin American history by virtue of him being so uniquely Latino. For better and for worse, he created an entire performance around himself that made it hard to separate him from his own mythology or his own caricature. Not to mention that Fidel was the linchpin that defined the second half of the 20th Century south of the border. Does anyone think someone as gringo as James Franco could possibly embody all of that? Casting Javier Bardem, the default shoo-in for real-life Latinos in big movies, would’ve been bad enough.

Which got me thinking: Did they cast James Franco as a way to intentionally disrespect Fidel? Choosing the worst possible actor as a condemnation of the tyrant that, objectively, he was? Because a) that’s a very weird way to go about that and b) is not something that would benefit what the story the movie is attempting to tell: His daughter’s, even though Alina gave this casting her blessing.

What is the point of casting someone who is going to fail so spectacularly at the role, someone that will guarantee a performance that will come across as farcical? Are they trying to pull a Taika Waititi in JoJo Rabbit? Because there were a series of very well-conceived artistic decisions behind that movie. Satirizing Hitler and nazi aesthetics strips them of how they want to be perceived. However, this movie is clearly an earnest, (self) serious biopic.

As I said before, Castro was already somebody who couldn’t be separated from his own stereotype, but there are also myriad reasons why the Cuban Revolution has been distinctively different from the typical revolution-to-dictatorship cycles of Latin America. There is no way a half-assed, campy performance could possibly get at the heart of that, it wouldn’t do justice to the tragedy of Cuba’s history.

In the comments to John Leguizamo’s post, Ana Navarro-Cárdenas wrote something that I wholly disagree with:

99 times out of 100, we stan Navarro-Cárdenas in this house. But in this one, I think she’s dead wrong: To the contrary, Fidel Castro is a character actors would kill to play. With a proper, complete biopic treatment, it would be one of the meatiest roles out there for Latino actors. We are talking about the perfect contemporary version of a Shakespearean tragic hero: The ultimate revolutionary turned despot, turned stagnant relic of the Cold War. There are also those couple weeks, six decades ago where he was right at the center of the potential End of the World.

Dictators are a part of our history as Latin Americans, almost always the result of US interventionism (for or against). To have a US actor portraying one of them, someone so gringo he once portrayed James Dean, someone that clearly has no cultural links to Latin American culture, is just erasure from a history we barely ever get to tell. Even for a movie that clearly looks like it will be a bust.


← 'Gatlopp' Is a Terrible Name for a Great Little Movie | Will There Be a Second Season of 'Becoming Elizabeth'? →