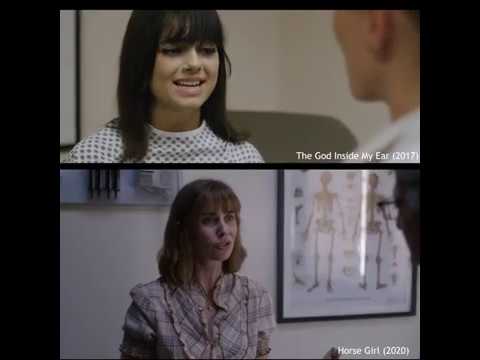 Star Alison Brie and director Jeff Baena are credited as the writers of Horse Girl, a 2020 film that premiered at the Sundance Film Festival and then went to Netflix to stream. According to a post in Reddit’s r/movies, it holds many similarities to an independent film from 2017 called The God Inside My Ear, written and directed by Joe Badon.

There will be spoilers for both films from this point forward.

The synopsis for each film is as follows:

After experiencing a peculiar and sudden breakup with her boyfriend, Elizia discovers a world of conspiracies, strange voices and horrifying visions. - The God Inside My Ear

A socially awkward woman with a fondness for arts and crafts, horses, and supernatural crime shows finds her increasingly lucid dreams trickling into her waking life. - Horse Girl

According to director Badon, the movies share the following similarities as well:

OK guys, This is the writer/director of the film THE GOD INSIDE MY EAR.

I made this film with my own money (under $10k) and with an all volunteer cast/crew. It was a passion project for sure.

The new netflix film HORSE GIRL (2020) and THE GOD INSIDE MY EAR (2018) have a lot of similar plot points. So many that I’d like you guys to check it out and let me know what you think.

Both main characters (girls) have just recently experienced the loss of a loved one.
That loss makes both girls reclusive.
Both girls work in sales positions at department stores.
Both girls start hearing voices.
Both girls take a drug that transports them to a white room with a black creature.
Both girls are urged by their friends to start dating again.
Both girls go on blind dates.
Both girls feel drawn to a humming building in town.
Both girls visit this building in the middle of the night (in their pajamas).
Both girls are reincarnations (or clones) of past dead people.
Both girls consult with a shaman who give them a magic thing that will drive out their demons.
One girl gets nose bleeds. One girl gets ear bleeds.
Both girls go to an ear, nose, throat doctor about their bleeding orifices.
Both doctors refer them to a psychiatrist/psychologist.
Both girls do a dance and a ritual with their magic/shaman thing in their respective living rooms in order to ward off their evil demons.
Both girls get stuck in a small lock space where the door to that space magically opens so that they can escape.
Both girls are visited by younger versions of themselves.
Both girls walk or ascend into a bright all encompassing light at the very end of the film.
And those are just the things I can think of off the top of my head.

Hey guys! This is Joe Badon. The writer/director of The God Inside My Ear. I just wanted to clear up any questions/concerns people are sharing. Some people are saying that some of my claims about the similarities are false, so I just wanted to address them. 1 - At 19 min 01 sec, Sarah smokes weed then gets drunk. Eventually, after much smoking and drinking she passes out at 24 min 00 sec and is transported into the white room with the black creatures. 2 - At 32 min 44 sec, Sarah hears arguing through the walls. She thinks it’s just her roommate and her roommate’s boyfriend arguing but later finds out that her roommate was not home at the time of the voices. Later at 40 min 11 sec, Sarah hears these same voices through the walls. 3 - At 1 hour 28 min 41 sec, Sarah wakes up in the same room with a younger version of herself. We see a glimpse of her younger self at 30 min 58 sec. 4 - At 1 hour 6 min 4 sec - Sarah does a ritual with her magic thing (incense) that the shaman character gave her. After rewatching the scene, she doesn’t really dance, she more just does a ritual around the room. But it’s pretty much the exact same scenario that happens in The God Inside My Ear at 1 hour 13 min 54 sec. I hope that answers some of your concerns! Feel free to ask me anything else! Thanks so much! - Reddit

Badon also shared a video comparing both films to each other.

In defense of Horse Girl, star Brie stated that the idea came from her own struggles with mental illness and began writing the movie in 2018.

I asked Roxana about some of the similarities given by Badon and she told me that although it could be argued that Sarah does see and interact with her younger self, she doesn’t really hear voices like The God Inside My Ear’s protagonist does. However, the film is very trippy and excels at blurring the lines between what Sarah is telling the audience and what can be trusted, making most of Badon’s points arguable.

Many people in the original Reddit thread concerning the possible plagiarism point out that several of the tropes noted by Badon are just that: tropes seen in most films about mental health using an unreliable narrator to pull the audience into a world of questioning reality and their own perception of the story. Other shots included in the video comparison are those seen in most genres of movies, making the case even weaker for a rip-off of Badon’s film.

One user, AlienScrotum, made an excellent point in saying that the video uses no dialogue and only selected scenes cut and shown in order to illustrate the most connections between the two films. One example is Sarah in the woods with a horse while Elizia (Linnea Gregg) from The God Inside My Ear walks with a child. The two aren’t the same.

Whether Badon further pushes his assertions of similarities to the point that Brie and Baena have to answer will only be known with time, but from these comparisons, it doesn’t look like a clear-cut case of anything insidious by producers The Duplass Brothers or any of the other creative people involved with Horse Girl.


← The Internet Figured Out the 'Last Christmas' Ending Twist and Paul Feig Wasn't Thrilled | 'Below Deck' Reunion: Andy Cohen Is So Gross, No Wonder Kate Chastain Quit the Show →