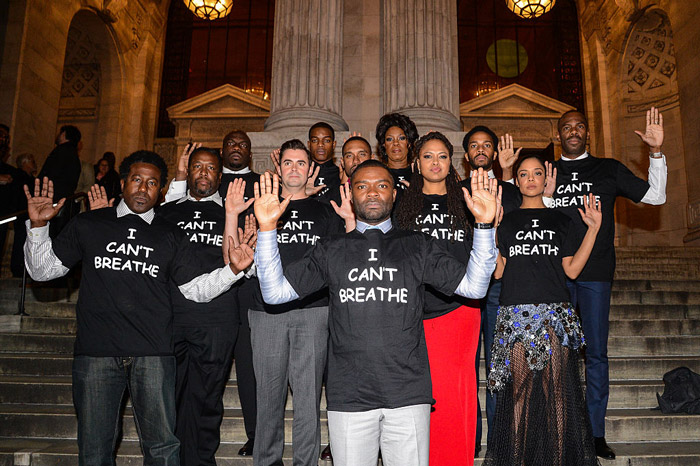 John Boyega has been vocal about how his activism for the Black Lives Matter movement could hurt his career in Hollywood. Yesterday, David Oyelowo shared a story of how he and the Selma cast and crew suffered a backlash from The Academy of Motion Picture Arts and Sciences because of their BLM protests during the film’s promotion.

Screen Daily reports the English actor was talking about how the BAFTAS should set themselves apart from America’s Oscars. Then, he shared this story:

“Six years ago, Selma coincided with Eric Garner being murdered. That was the last time we were in a place of ‘I Can’t Breathe.’

I remember at the premiere of Selma us wearing ‘I Can’t Breathe’ T-shirts in protest. Members of the Academy called in to the studio and our producers saying, ‘How dare they do that? Why are they stirring S-H-I-T?’ and ‘We are not going to vote for that film because we do not think it is their place to be doing that’…

“It’s part of why that film didn’t get everything that people think it should’ve got and it birthed #OscarsSoWhite. They used their privilege to deny a film on the basis of what they valued in the world.”

To make this crystal clear: Academy voters, who at the time were overwhelmingly white and male, decided that the team behind the Martin Luther King Jr. biopic Selma, should not speak out about racial injustice in America. The movie may have been about a world-changing protest in which Black Americans risked their lives defying a white supremacist police force. But does that mean the cast and crew should make that connection to the ongoing battle against that same corrupt, murderous, racist establishment?

Since then, the Academy has stepped up its inclusion efforts, inviting record-breaking newcomers to their membership, including luminaries who are non-white and not men. Still, Green Book won Best Picture in 2019.

The Academy has responded to DuVernay and Oyelowo with a non-apology and weak promise.