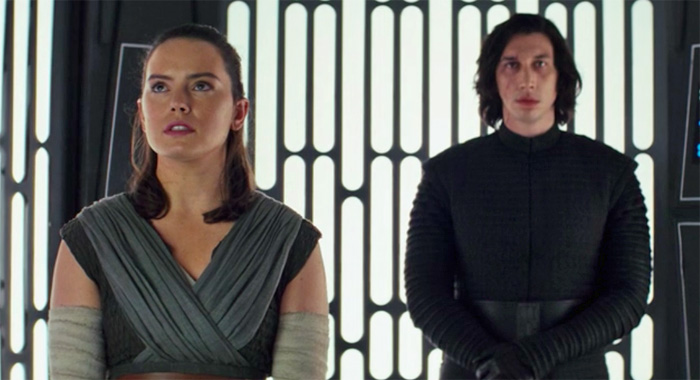 Now that Joker’s in our rearview, and we can finally pretend the whole thing never happened — What’s a Todd Phillips? — it’s time for everyone to get super pissed about Star Wars again. Yay!

In a new interview with Entertainment Weekly, Daisy Ridley confirms that The Rise of Skywalker will address “Reylo.” And what is Reylo you foolishly, stupidly ask like a fool? Well, it’s exactly what it sounds like, and frankly, something I knew very little about until I took a stroll over to Tumblr and Jesus Christ, what are you people doing?!

“No locked doors in this hut, YOUNG LADY.”

Also, not for nothing, there’s this elevator scene, which I honestly never gave a second thought because it didn’t involve space ninjas taking lightsabers to the brain. Fortunately, the crack team of horn-dogs on Tumblr know how to catalog pure sex when they see it.

[Pretend I made a very saucy Y-Wing joke here.]

That said, while writers like Lindsey Romain have made compelling arguments for Reylo to be a central element of Rise of Skywalker, there is a massive elephant in the room. Namely Kylo Ren is a Nazi Space Wizard who just promoted himself to Head Nazi Space Wizard in the last film. Fortunately, Daisy Ridley tells EW that the toxicity of Rey potentially boning an intergalactic member of the Alt-Right won’t be overlooked for whatever that’s worth.

“It does not bother me, people writing theories,” Ridley said. “It’s really fun hearing them. Plus, because I know what’s sort of going to happen, I think it’ll be really interesting to see people’s reaction to [the final film]. Obviously, there’s this whole Reylo thing and some people are very passionate about it, some aren’t.”

Ridley hinted that the seemingly romantic connection isn’t left unaddressed by director J.J. Abrams in The Rise of Skywalker.

“J.J. does deal with [it],” she added. “It’s a very complex issue. People talk about toxic relationships and whatever it is. It’s no joke and I think it’s dealt with really well because it’s not skimmed over.”

I’m sure J.J. Abrams and, let’s see here, Chris Terrio the guy who wrote Batman V Superman and Justice League will, uh, handle that situation… well? Goddammit. In the meantime, there are rumors of new Rise of Skywalker trailer dropping during Monday Night Football next week, so I guess we’ll see how prominently Reylo is featured in that.

As for my personal thoughts, which I buried way down here where they belong, my concerns are two-fold:

1. Rey and Kylo Ren getting together suggests he turns back to the Light Side like his personal Jesus Darth Vader — or Reylo meets in the middle with the Gray Force — which falls into the Star Wars trope of echoing the Original Trilogy. “It all rhymes,” as George Lucas put it. The Last Jedi did a fantastic job at subverting expectations, so it’d be some real shit to swing back towards predictability.

2. The Rise of Skywalker is supposed to be the end of the Skywalker saga. If Reylo happens, that will presumably involve a Skywalker sticking his penis in a vagina, and some kid on the bus once told me that’s where babies come from. Unless Rey’s possibly cloned uterus isn’t capable of reproduction, but I don’t really see everyone stopping a children’s movie dead in its track by having its main character say she can’t have kids. (Yes, I’m looking directly at you, Age of Ultron.) Anyway, my point here is that Reylo means more Skywalkers potentially popping out of Rey, and I’m guessing at least one of those tykes is going to be pretty wicked with a lightsaber.

This has been an entire internet article about Star Wars character f*cking. You’re welcome.