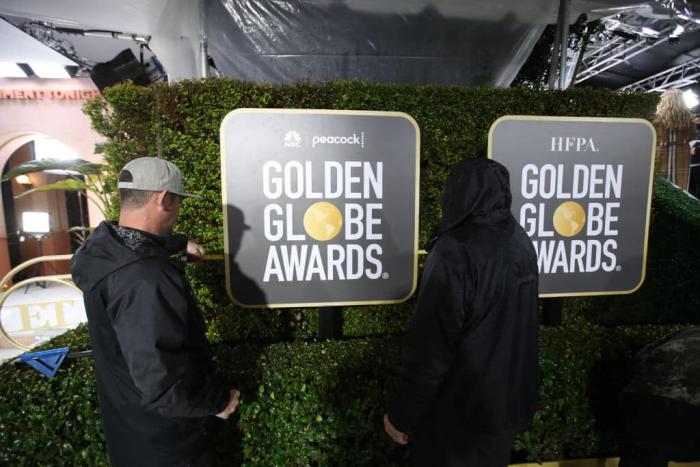 Christ, Why Do We Keep Pretending That the Golden Globes Matter?

I really don’t want to talk about the Golden Globes. This time last year, I held on to the tiniest sliver of hope that the entertainment industry may have finally been embarrassed into ditching the Hollywood Foreign Press Association. After all, it had been exposed for its lack of Black members, but the open secret of its corruption and bribe-heavy agenda finally became impossible to ignore. Shamed into change, the HFPA promised major alterations and their ceremony was reduced to a press release with some Twitter reveals. It wasn’t as though cutting the Globes out of our lives was a hard thing to do. Its status as an almighty Oscars precursor has always been greatly exaggerated, and it only garnered headlines for its booze-heavy show. Why not cut them out and let the Critics Choice Awards or something get the residual glow? Alas, as I so often do, I overestimated the film world’s willingness to undergo any sort of change.

The Golden Globes Awards are back on TV. NBC have allowed the ceremony to return to their network and Jerrod Carmichael, a comedian who is far too good for this nonsense, is hosting. The ceremony is on a Tuesday night now, for some reason, and the news reports have been hyping up its return and predicting the winners, as they did for many decades. And I can’t help but wonder: Why? Seriously, why are we still pretending that the Golden Globes mean anything? Why are we humoring the glorified star-f**king party of a group of oft-discredited goons who have zero interest in film? We don’t have to do this anymore, I promise you!

The Globes only have the power that everyone else is willing to give them. The actual award doesn’t carry the heft of an Oscar or SAG Award, which are given out by industry fellows, nor is it as legitimate a critical celebration as a Critics’ Circle award. We could get into the weeds of the entire concept of awards and their arbitrary standards for merit, of course, but even in terms of those moving goalposts, the Globes are a ludicrous enterprise. Sometimes, they make interesting choices but they are otherwise too committed to wondering what the Oscars will do and how many celebrities they can get to kiss their backsides. Alas, plenty of actors, directors, and the like have been willing to play ball because they’ve bought into the flimsy notion that it’s somehow a required part of awards season.

Remember, the reason everyone turned against the HFPA in the first place was because of their racism. Their lack of Black members led to shocking but unsurprising reveals about how their cloistered organization shut out filmmakers like Ava DuVernay. One report noted how the HFPA rejected requests for press conferences with Black-led casts, which included titles like Bridgerton. DuVernay detailed on Twitter how they held a HFPA press conference for her series When They See Us, to which less than 20 people showed up, and none of them seemed to have seen the show (but they did peddle their own scripts during the Q&A instead.) Their nastiness extended to misogyny, with Scarlett Johansson speaking out over how actors like herself were often forced to face ‘sexist questions and remarks by certain HFPA members that bordered on sexual harassment.’ There’s really no indication that the group has changed its ways given its nominations list for 2023 is heavily white and, yet again, contains no female directors. Even the Oscars have a better track record in that field.

It’s been over four years since Brendan Fraser gave an interview to GQ, wherein he detailed his experiences of alleged sexual assault at the hands of the then-HFPA President Philip Berk. He talked candidly, and for the first time publicly, about it, saying that Berk grabbed his genitals. Berk denied this, but did write in his memoir that he grabbed Fraser’s backside in jest (but not with his permission.) When Fraser’s team asked the HFPA for a written apology, Berk gave one but denied wrongdoing, only saying that ‘if I’ve done anything that upset Mr. Fraser, it was not intended and I apologize.’ Fraser says that the alleged assault left him depressed and that he fears the HFPA blacklisted him as a result. After this interview went live, many expressed support for Fraser.

Now, the actor is back in the limelight with a major film and, in a display of startling audacity, he has received a Golden Globe nomination for his performance in The Whale. In a 2022 interview with GQ, he said that he would not attend the ceremony, regardless of whether or not they’d seek to reward him for his work. He said, ‘I will not participate. It’s because of the history that I have with them. And my mother didn’t raise a hypocrite. You can call me a lot of things, but not that.’

I honestly hoped that we’d see more major figures declaring solidarity with Fraser and sitting out this sham of a ceremony. What would they have to lose? Yet it seems as though everyone is back to normal. Tons of actors took to social media to lavish thanks on the HFPA for their very important nominations. The trades and awards prognosticators are back to treating the Globes like a legitimate part of awards season. Fraser’s allegations and the years of HFPA corruption are barely mentioned, even as everyone talks up the Brenaissance and the changes to a post-#MeToo Hollywood. And for what? A cheap trophy voted on by a hundred so-called journalists with some of the worst reputations in the business? For the frequently debunked idea that it might help you get an Oscar nomination? Isn’t that Hollywood in a nutshell…

The HFPA wants attention and legitimacy, and despite repeated opportunities to deny such qualities to an intrinsically awful and bigoted organization, Hollywood has bent over backwards to give them it. Look out for everyone who attends the show tonight, to those winners who lavish thanks on the Hollywood Foreign Press Association for their kindness. Our standards for change in the entertainment world are already maddeningly low, but it’s almost impressive how, even then, they fail.