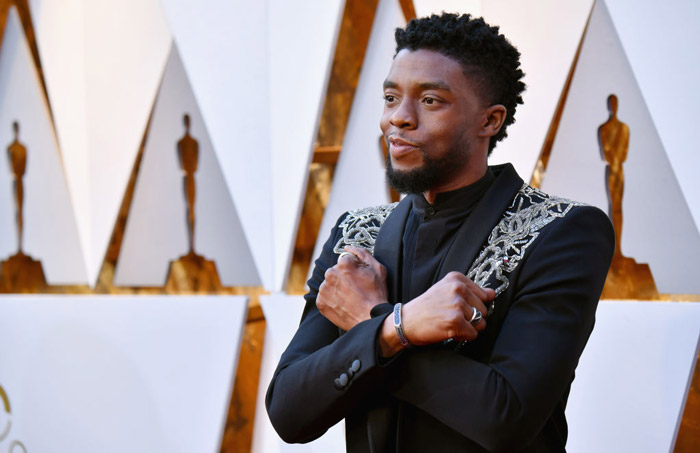 Chadwick Boseman is officially a “Hero for the Ages,” dubbed so by last night’s MTV Movie & TV Awards: Greatest of All Time. The late actor’s MCU co-stars, Robert Downey Jr. and Don Cheadle, appeared remotely to give a speech celebrating, the life, legacy, and heroism that Boseman displayed on and offscreen.

.@RobertDowneyJr and @DonCheadle paid tribute to the late Chadwick Boseman ahead of his Hero for the Ages honor at the #MTVAwards: Greatest of All Time. ❤️ pic.twitter.com/EmE5FcPXUM

Downey said of the 43-year-old Black Panther star, “Mr. Boseman truly embodied what it meant to be a superhero. His impact as a groundbreaking leading man, as an icon on screen, it won’t be quantified by the box office records he broke, but by the legions of fans who will celebrate him for many years to come.”

Of course, Boseman was known for more than playing the noble king of Wakanda, T’Challa. Cheadle pointed to Boseman’s other epic performances, many in biopics like Marshall, 42, and Get On Up, wherein the stories of Black pioneers Thurgood Marshall, Jackie Robinson, and James Brown were brought to life. “He brought humanity and truth to people who felt larger than life, and he did it in a way that honored their memories.”

They spoke about his humanity and compassion offscreen. “He was most heroic when just being Chad,” Downey said, “That’s when he was bigger than anyone he played onscreen.”