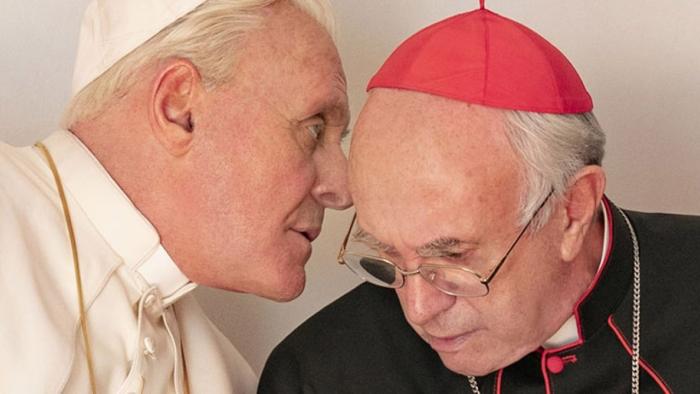 TIFF 2019: Can You Make An Adorable Movie About the Catholic Church? ‘The Two Popes’ Sure Does Try

Netflix has a stacked slate this Oscar season. Noah Baumbach’s Marriage Story opened to universal acclaim and critics are practically dying to finally feast their eyes on Martin Scorsese’s The Irishman, set to premiere at the New York Film Festival. That doesn’t even get into festival titles like The King, Dolemite is My Name, and The Laundromat. Suffice to say they are everywhere and boy do they want you to know about it. While the big bets are on Adam Driver and company, there is an ace up the streaming service’s sleeve in the form of The Two Popes.

Directed by Fernando Meirelles of City of God, this drama imagines a scenario where Pope Benedict and the future Pope Francis have a meeting to discuss faith, hope, and the future of the Catholic Church. Cardinal Jorge Mario Bergoglio (Jonathan Pryce), the archbishop of Buenos Aires, is ready to retire. After coming second in the papal vote to Cardinal Joseph Ratzinger (Anthony Hopkins), he feels it’s time to step down and get more work done on the ground in Argentina. As he prepares to hand in his resignation, he receives a call to the Vatican from Pope Benedict XVI. The two men have seldom agreed on matters of the church and their meeting symbolizes the division and unity of two halves for Catholicism’s future: Tradition versus reform.

One of the main reasons The Two Popes has proven so impossible to ignore for Oscar fans is the presence of screenwriter Anthony McCarten. His past three movies — Bohemian Rhapsody, Darkest Hour, and The Theory of Everything — each landed their respective leading men Best Actor Oscars. As a result, McCarten is something of a kingmaker in this business, even as critics rank his work from decent to shockingly bad. This is a man of formula, and there’s no genre better suited to sticking to the rails of narrative structure and theme like the biopic. But why complain? The little gold men speak for themselves.

The Two Popes is more of the same, although it at least has the benefit of two striking lead performances and some solid one-liners. Stories of Great Men are tough to pull off with any degree of authenticity and the risk is always high that things could quickly fall into smarmy hagiography. Attempts to humanize near deified figures (literally, in this case) often stumble due to overtly treacly sweetness. It’s tough to avoid all these questions when watching The Two Popes because it’s so steadfastly focused on being the exact movie you think it’s going to be and being the most solid version of that.

I get the feeling a lot of this movie came to be because someone saw two photographs of Jonathan Pryce and Anthony Hopkins and thought the uncanny resemblances were too good to waste on an SNL sketch. In fairness, they come pretty damn close to the real thing (and we know how the Academy feels about that?) When the movie is suitably understated — and it at least has the self-awareness to do so for most of its running time — it gives Pryce and Hopkins room to breathe and allow these men to feel lived-in rather than mouth-pieces for ideas as the script seems determined to reduce them to. Pryce, in particular, is given most of the shine from the story since Bergoglio is positioned as the moral center not only of the movie but the entire faith. Mercifully, there are no big shouty moments or obvious Oscar clip scenes, which makes this one of McCarten’s subtler scripts, but that’s not saying much.

The major problem with the film is the central conceit: This is a biopic of sorts that wants to use two men as the conduits for a vaster and more tangled conversation about the Catholic Church and everything it represents. We’ve spent centuries trying to figure that out so one two hour movie can only do so much, and what it chooses to do is focus more on platitudes, theses, and offering a satisfying conclusion. Ratzinger is the past and Bergoglio is the future. Simple, right? Ha.

Moments designed to elicit awws and laughter end up feeling ghoulish when you stop long enough to remember how much the Catholic Church probably hates you. Playing that central dynamic in part like a buddy comedy (the end credit scene is borderline parodic in its eagerness to be cutesy) can’t work independently of reality. Watching the two Popes (the film at least has the restraint to only make one joke about that) eat pizza and drink Fanta is a funny image but who needed this? For the believers, those Catholic followers who remain loyal to the Vatican, this may prove entertaining, and they are certainly a sizeable demographic for a streaming service, but narratively speaking, it’s utterly insubstantial. In one moment, we see real-life footage of Francis’s visit to Dublin, with an LGBTQ rights flag prominently featured next to an image of him, and it made me audibly groan. To call it propaganda feels a tad harsh since the film does not whitewash history, but it’s certainly a comforting layer of icing over a cake gone to rot.

It’s not that the movie ignores the Church’s crimes or the dark spots in either men’s past, but it wants to put a nice neat bow on them and call the issue resolved. Ratzinger is snidely called a Nazi by a couple of unnamed extras but that notable part of his youth is not discussed beyond that, while Bergoglio’s controversial actions during Argentina’s Dirty War get more screen-time, only to be concluded in a manner that suggests the screenwriter had no real desire to untangle such a bleak period of South American history. Flashbacks are minimal — and only shown for Bergoglio’s side — but fall flat in the way flashbacks typically do in biopics. It’s a film that simultaneously wants to take itself extremely seriously while hamming things up for the Sunday night granny crowd. If the film just embraced full camp, at least we would have gotten more Anthony Hopkins stink-eye.

I attended a lot of press screenings during my time at TIFF this year. Us critics and industry folks aren’t prone to ovations or applause at the end of these events. Why do that when there’s no audience for such a display beyond ourselves? Out of every press and industry screening I attended, there was sustained and enthusiastic applause from the audience in two movies: One was Joker and the other one was The Two Popes. Make of that what you will.

The Two Popes will received a limited release in the United States on November 27 then premiere on Netflix on December 20.