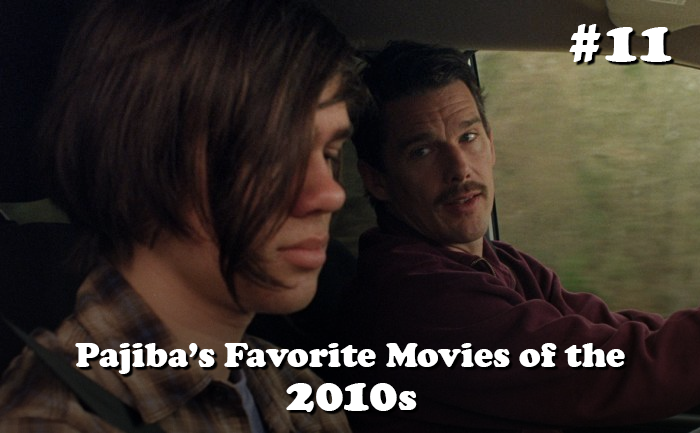 We're All Just Along for the Ride

There are times when I think about why I watch films. I wonder about what it is that I want to get out of the experience when I descend into the darkness of the theatre to commune with the spirits there. Am I looking for a thrill? Or a roller coaster? Maybe catharsis? Or empathy? A chance to live another life, albeit briefly? At various times and over the hundreds of films I’ve seen in my life it’s probably been all of those and more. But the older I get and the more I feel the bonds of time slipping loose and the rules of chronology buckling under the strain of accumulated years, the more I’m realising that the one thing I’m looking for in a film more often than anything else is quite simple: A confirmation. An experience that tells me, ‘You are not alone.’

When Boyhood came out in 2014, it hit me hard. Really hard. I am a big fan of Richard Linklater’s movies, so I was intent on going to see the film in the cinema as soon as it came out. When it did, I went straight away, on a quiet Saturday afternoon, alone. I had a feeling that I wanted this to be a private conversation; that there’d be something about Linklater’s chronicling of twelve years of one boy’s life, from childhood to adolescence, to young adulthood — filmed, remarkably, in ‘real time’ in segments over the course of twelve years of child actor-turned-actor Ellar Coltrane’s life — that would make me want to face it alone, and to let it wash over me totally, without the diluting effect of another person’s presence. I’m glad I did. I needed that experience. In 2014 it had been four years since I had suddenly and completely unexpectedly lost my dad. Four years is just about enough time after an event like that for everything to feel ‘normal’ again, in as much as all routines have long since returned and adjustments both practical and emotional have been made and baked in. The truth is of course that after something like that you never feel ‘normal’ again. The old structure is no more. Even the foundations are cracked. You have to try to build something new out of the ruins. And you need help along the way. For me, at that moment in time, in that darkened room with the giant screen, Boyhood helped tremendously.

There’s something to be said for a great TV show. The space and time afforded to the medium means that you can tell truly expansive, in-depth stories, with immense detail and rich characterisation. It’s something that we’re often told these days gives television a great advantage over cinema, with its more relatively restrained running time. And it’s true, to an extent. But I think in a sense it’s almost like comparing apples and oranges: Just because both TV and cinema are visual mediums, that doesn’t mean that they should be so often compared. They are trying to do different things, and while transcendental storytelling efforts like The Wire will forever remain undisputed masterpieces that could’ve only happened on television, there is a certain magic to cinema that remains all its own. Even aside from the emphasis on, and preponderance of, glorious imagery, there’s immense poetic power in the short-form storytelling that cinema trades in, in the way it sometimes skips over minutiae and tells a story more impressionistically and with grand brush strokes.

Boyhood, somehow, does all of this. It tells a grand, sweeping story, in a way that has never before been done, and yet it composes it often using the smallest moments. Despite the popular narrative around it often flattening its significance into just its form, the movie’s daring formal experimentation never overshadows its intimate human connection. Over the course of twelve years that we glimpse the titular boy, Mason, we see him play with his friends and argue with his sister; he goes to the movies, and camping with his dad; he bonds with his mum and struggles with her efforts to forge as best she can what she understands to be a family. He grows before our eyes in fits and starts. The movie focuses in on these banal, everyday moments, while generally avoiding the big ‘tentpole’ ones that mark the process of growing up in a typical cinematic montage or what you might expect from a project like this. There is drama, but the vast majority of it is relatively low key. A part of that is a function of the demographics at play. Nevertheless, in many ways that low key, almost anti-drama nature of it is exactly what makes the film as strong an experience as it is. The script is long, broad, and in typical Linklater style absolutely brimming with empathy and humanism. The principal players all grow and mature, albeit at different rates, ebbing and bobbing along with the ineluctable tide of time. They chase dreams and search for themselves. They grapple with what they find and wrestle with it when it doesn’t look like what they thought it might. Promises of potential and possibility, of love and connection; some come true and some don’t but all in the end melt away in the maelstrom, as do we. Life, with all its vagaries, Boyhood says, will happen as it will. It was happening before we got here and it will keep happening after we leave. We are just along for the ride, for only the briefest moment. And that’s okay. By zooming out to such a degree, and yet keeping his keen eye on the granular detail, that is what Linklater seemed to be saying to me, half a decade ago, as I gazed up at the big screen. It was a message I really needed to hear then. I still do.

← Netflix's 'Messiah' Trailer: Jesus is the Devil (And He's Hot) | Kamala Harris Drops Out of the Presidential Race →