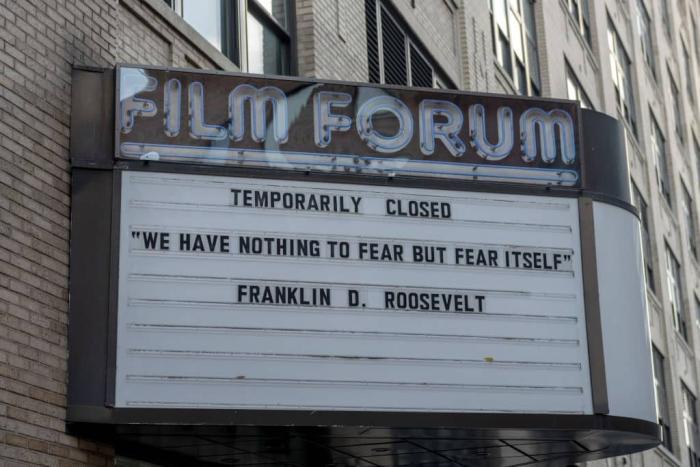 Box Office Report: How Does It Get Even Worse?!

Halloween weekend is over and now we enter the terrifying election week. The hits just keep on coming. That combination of panic and at-home spooky fun may have been what kept people away from the theaters these past few days. Or, you know, it could just be because everything is terrifying and there’s a plague going on and the previously blissful respite of the cinema now holds no allure or safety. Here in my neck of the woods, we’ve entered a new tier of COVID lockdown, which means the cinemas are once again shut, as are gyms and other vaguely related entertainment venues. I guess it’s back to finding ways to entertain myself now. God, that sucks.

But enough about me. Let’s turn to the box office. Is it bleak? Of course! But you knew that already. The top spot saw a new occupant in the form of the horror movie Come Play. That grossed $3.15 million from 2,183 cinemas, giving it the highest per-theater average of $1,442. Good for them! Another horror movie, Spell, was the only other new release to debut in the top ten, grabbing the ninth spot with $210,000 from 369 theaters.

I must admit that I was expecting at least one or two bigger horror re-releases for the season. You know, the kind of stuff that would play well in drive-thru venues and the like. The only re-release we seemed to get, however, was 2020’s wonderful surreal horror Mandy. That does seem like a fitting film for the current mood and one that would play well in deserted theaters. It brought in a modest $19,169 from 29 venues. Nothing to sneeze at, and definitely a film worth checking out if you haven’t already.

Well, there was another big re-release. Remember Alita: Battle Angel? That Robert Rodriguez manga adaptation that didn’t do massive business at the time but has a surprisingly dedicated fandom? Well, it’s here, and it made $128,000 from 1,060 theatres. Not wild numbers but it bumps up that domestic gross a touch. Re-releasing movies right now feels like a smart move. Disney’s currently the king of it because of course they are, but there’s room for the other studios too. It’s cheaper and less risky than releasing new movies, and it appeases some cult fans who always have extra cash to spare. It totally works too. I saw the 4k HD re-release of Akira in a cinema and it was bliss. Pure anxiety-inducing bliss.

As we come achingly close to a brand new year, it’s worth noting just how crammed full of releases the 2021 slate is. Studios have spent the past few months scrambling for ways to shove all their canceled 2020 releases into their new calendar, and there’s really no room left. Now, if things get pushed back even further, we’ll see 2022 real estate being snapped up quickly. How will that impact the movies themselves? Will people be eager to run back to theaters if/when we get an all-clear? Will they see everything or be pickier with their choices? What takes precedence right now? I have no answers to any of those questions but I will say that we’ve well passed the tipping point of normalcy in Hollywood. Frankly, anything goes right now, as evidenced by the gossip surrounding the possibility that MGM/Sony may sell off the next James Bond movie to Apple or Amazon.