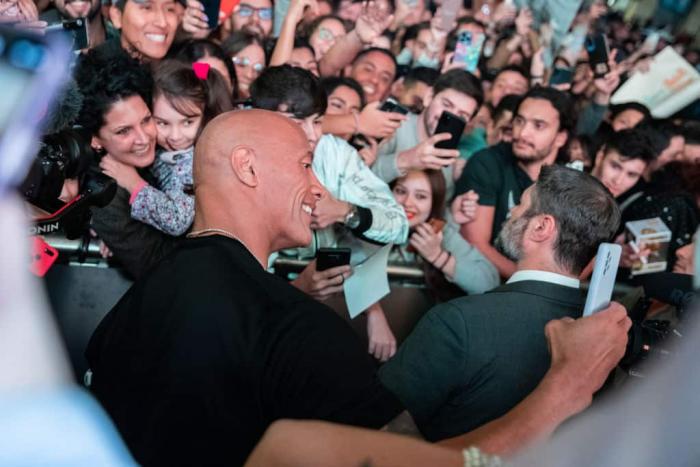 Happy Halloween, everyone! I hope you all had a suitably spooky and costume-filled weekend. The box office wasn’t especially scary, at least not in terms of cinematic content. There was one new wide horror release, but it didn’t do stellar business, and the remaining genre fare from weeks past may have had its time.

That means good news for DC’s Black Adam, which held onto the top spot for a second week despite a 58.7% drop in gross from its opening weekend. Its total domestic gross now sits at over $111 million, which seems pretty solid, although it’s unlikely to make the kind of big bucks that its blockbuster competitors pulled in this year. With a budget of reportedly $200 million, it’s at least broken even worldwide, although we’ll need to see if this thing comes close to making its money back. I’m still sort of fascinated by this film, how it came to be, how it works as a star vehicle for Dwayne Johnson, and how it’s become this weird Discourse vehicle online. If this is the new starting point for the DCEU, they may need to have a Plan B, just in case.

Debuting at number three is Prey for the Devil, an exorcism horror, with $7.025 million from 2,980 theaters. That’s not particularly impressive, although I doubt this thing had a massive budget for Lionsgate to worry about. As with many horror films, it’s a three-week profit machine then a VOD title. Then again, if you pull it off, you can make real money. Look at Smile, which has grossed $92 million domestically, and that was a film Paramount was initially going to release on their streaming service. Word of mouth and savvy marketing can help, but you also need the reviews. Hello, Halloween Ends, which continues to tumble week after week.

New at number 11 was the concert movie Coldplay: Music of the Spheres: Live Broadcast from Buenos Aires with over $1 million from 833 venues. Hey, Coldplay has a fanbase. I snark but it’s evident that their supporters are still hanging in there, even with that terrible newest album. I miss the ‘Viva la Vida’ days.

In other limited-release news, Call Jane, the dishearteningly timely drama about a pre-Roe underground abortion network, made $240,755 from 1,070 theaters. James Gray’s semi-autobiographical drama Armageddon Time brought in $72,000 from six cinemas. Till entered its third week of release by opening wide and experiencing a staggering 673% jump in its gross. That film, about Mamie and Emmett Till, has received stellar audience scores and strong word of mouth, as well as impressive critical fanfare. The critical darlings of the season, Tár and The Banshees of Inisherin, also did strong numbers as more theaters were slowly added to their run. Awards season is a slow and steady race.

This coming week is a quiet one in preparation for the new Black Panther film, with limited releases for The Estate, Dear Zoe, and Soft and Quiet. Hey, they know what’s coming.

You can check out the rest of the box office report here.