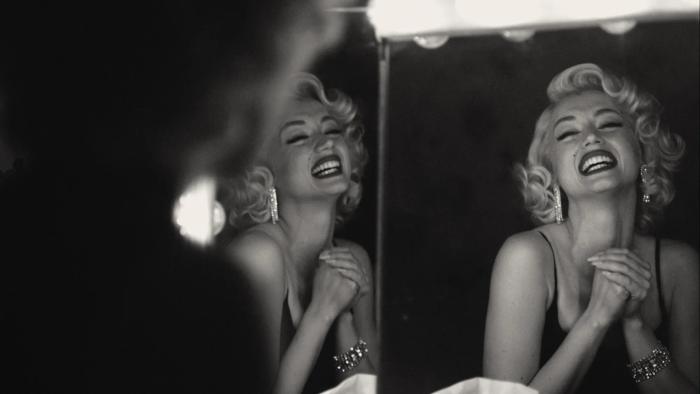 'Blonde' Is a Horror Story, Both Monumental and Deeply Uncomfortable

Andrew Dominik’s Blonde is a phantasmagoria of a film, an expressionistic meditation on a much-fetishized life. It’s a faithful adaptation of Joyce Carol Oates’ remarkable novel, (Yes, I know she’s a mess on Twitter, but that book is nothing short of an enchantment), which is harder than it sounds: the novel is a wandering, deeply internal and emotive narrative in which the main character is only loosely named. She is simply “the blonde actress” in the narrator’s voice, while many other names are thrown at and attached to her in turn. She’s a character at the center of a storm, eternally earnest, open, and hopeful, eager for affection, and continually battered by the forces she is exposed to.

The film, like the novel, traces Monroe’s storied life through the frail, human lens of the woman herself—the woman trapped inside the idea and image of Monroe. The heart of the film, successfully carried over from the book, is the gaze focused not on the glossy product that is Marilyn but on the fractured and heavily manipulated woman whose talent and soul was consumed under the “sexpot” caricature. It’s absolutely a brutal film. There’s more blood, bruises, abuse, screaming, and sobbing than sex by a long shot. This is not a titillating NC-17; it’s a horror story, and it’s designed to be both monumental and deeply uncomfortable.

People will disagree extensively over this movie, but one point remains incontrovertible in my book: Ana de Armas absolutely nails it. Her presence is utterly immersive and utterly convincing. Despite a few slips of her accent—notable if you were watching out for them, but otherwise negligible—de Armas’ wide-eyed emotive energy is completely on the mark. She occupies center stage of this intimate epic, communicating unconscious grace and trust, without making any of it feel like a performance. That said, there’s absolutely a meta quality to her rendition of Marilyn. Voiceovers that might come from the perspective of Norma Jeane could just as easily be spoken by de Armas herself—meditations on playing the role of this “blonde actress,” dissociating from one’s own actions as those actions are simply those assigned by virtue of the role you’re cast in.

The film itself, like its central character, is visually fractured over and over again, with shifting aspect ratios and black-and-white-to-color transitions creating an unpredictable, somewhat Godard-like canvas. The cinematography is something to behold. In a movie composed of uncertain realities, shifting perspectives, drugged dreams, and performative transformations, Blonde’s visuals keep pace and then some.

For all its successes, Blonde does encounter some stumbling blocks. Around the two-hour-and-fifteen-minute mark, the languorous arthouse style begins to drag. Frankly, the film doesn’t need to be that long. The spiraling decline of its final act might be intentionally meta, but it falls short in its impact.

By the time Kennedy (Caspar Phillipson) appears, the movie is sliding toward that territory, and the sequences are pointedly disturbing but do verge on the gratuitous to make its point.

Blonde is complicated in its vision and in its mixed successes. There are many valid points of critique to be had, but the outcry against the movie as a whole bothers me.

For me, the root argument of this should not have been made does not hold water. The film is a challenge to the fetishization that haunted Monroe in life and still haunts her in death, the sexualization and sexual violence that took her life out of her own hands. In a sanitized, blockbuster bio-pic landscape populated by Bohemian Rhapsody and Rocket Man, Blonde is its own monster. The movie makes “the blonde actress” the object of gaze after gaze after gaze, but never is that gaze comfortable or justified, even when she examines her own body in the mirror.

In one horrific sequence, Marilyn walks a red carpet flashing a red-lipped smile at the grotesque audience of fans and paparazzi with faces subtly distorted beyond reality, their cavernous mouths stretching just a little too wide in silent, hungry screams.

Blonde isn’t fetishizing; rather it’s about the specter of her fetishization: As Arthur Miller (played with charming, sympathetic tenderness by Adrien Brody) steps outside a New York theater after being astounded by Marilyn’s audition for the role of his treasured first-crush Magda, he’s confronted with a multi-story advertisement in the form of the famous subway-wind-up-white-dress shot. The women—Marilyn, Norma Jeane, Magda—are disparate entities. The men who admire, adore, and marry her seem frequently at a loss as to which facet of her they are in love with—the product or the person, the well-read dreamer or the uncareful, hurting romantic or the golden goddess that dominates the screen.

Marilyn is not the main character: she’s a poltergeist that “the blonde actress” repeatedly, desperately conjures to satisfy the demands of the people around her. At one particularly unsavory moment, she wonders in a voice-over, “Why does Marilyn do these things?” She is so far from in control of her life, her narrative, her body, her future. Repeatedly, pregnancy and the possibility of children occur with increasingly devastating consequences. Over and over again, her attempts at control are either thwarted or ignored.

This movie won’t be for everyone, but it is an honestly extraordinary movie with its vision intact. That vision is not gentle nor entirely palatable, but it’s delivered with a purposefulness and heart that I have to admire.