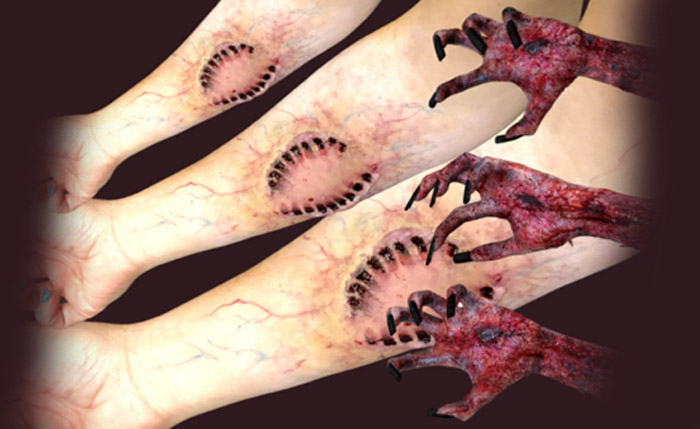 Wanna' Learn How To Make A Zombie Bite?

Since childhood, I’ve been in awe of practical effects makeup. Over the years, I’ve relished the monsters and body horror borne from this skill. I’ve watched every single episode of SYFY’s Face Off and RuPaul’s Drag Race. I’ve tried my hand at simple DIY applications based on online tutorials but had never stuck my hands in the real tools of SFX makeup, the latex, the wax, the bruise-colored paints. That is until this weekend when I lived my Face Off fantasy.

On Sunday, I participated in a 2-hour Zoom workshop, courtesy of Austin School of Film. With the pandemic temporarily shutting down their in-person sessions, the school came up with the Play At Home series, cool classes you can take via video-conference from the safety of your home. Here, students can take classes on animation, podcasting, filmmaking, and—yes yes yes!—special effects makeup.

I signed up for a class on how to make prosthetic bite marks. For a small fee ($30-40 depending on the makeup course), enrolled students are sent a box of materials that contains everything you need and then some. My box arrived three days before the class and contained: a makeup bag, 2 makeup brushes, 1 powder brush, scar wax, liquid latex, 2 stipple sponges, cotton balls, q-tips, makeup wipes, a “bruise” wheel (more on this later), a bottle of fake blood, special “Hawgwash” small-batch cleaner, and some swag, like an Austin School of Film pin and stickers.

The SFX makeup classes are taught by Jennifer Cunningham, an Austin-based artist/designer who has done makeup for stage and screen. She’s had longer format in-person workshops with Austin School of Film, but since April has been remodeling these into “bite-sized” lessons that can be done in an afternoon. Considering how fun and affordable this is, I was surprised by how small the class size was. There were six of us, calling in from across the country. Cunningham asked us to introduce ourselves, (name, preferred pronouns, location, and why we chose the class). My classmates included horror enthusiasts, theater kids, and a drag king looking for some new tricks.

Cunningham stepped us through the process of making a bite, urging us to take liberties wherever we liked. While we worked, she demonstrated, creating a bite on her own neck. I’d chosen my arm as my canvas, which I soon regretted. It meant I was working one-handed, plus the design creeped into my arm hair (not recommended for liquid latex!), and my arm was a bit small for the bite I mocked up. Still, for my first attempt, I was pretty thrilled with the results:

Some of my classmates fared far better, really nailing the bruising and creating more identifiable bite patterns. Still, the kit ASoF sent had enough materials that I could totally try again, this time working at my own pace. (Which I have learned is SLOW.)

Cunningham has a wealth of information and shares it warmly. She took questions as we went and gave pointers on how to improve next time we give a bite a go. It’s easy to see why her courses are already attracting repeat customers. Some in my class were familiar faces to her, while others were the daughters of moms who’d taken the classes before. The environment—however virtual—was welcoming. Sure, I was making a mess of my arm, but everyone was very supportive of the final results. We cheered each other, and I marveled at how we were all given the same instructions yet came up with our own unique spins on the design!

If I were to take another of Cunningham’s classes (who am I kidding, I will), I think I’d have a picture reference handy. Her step-by-step process was thorough. However, I think I’d have done better with a clear vision of the end product in my head. But your mileage may vary there. Already, I’m itching to do this again. Which I can at any time, thanks to the generous portions of wax and latex offered in the kit. Then there’s the “bruise” wheel.

This is a cream-based makeup palette of green, yellow, navy, and two reds that allow you to create the discolorations of a bruise. A skillful hand can also blend them into a flesh tone, better hiding the seams of your prosthetic. Cunningham noted the bruise wheel can go a long way, being used over and over for months without running out. So, once you’ve got one, you can sign up for another class and use the discount code “bruise” to avoid getting a second. That discount code will save you $15, which makes a second class a steal.

If my experience has you intrigued, you can learn more about Austin School of Film’s Play At Home virtual workshops at their website. Coming up, there are sessions inspired by the Final Girl of slasher horror, the body horror of cyberpunk cinema, and “Lovecraftian Creatures.” Then October—we’re told—will really amp things up with plenty of classes that will give your Halloween costume some professional flare.

← Can You Guess Who This Celebrity Shaving Is? | Would You Eat This PBJ Sandwich? Because I Am Outraged →