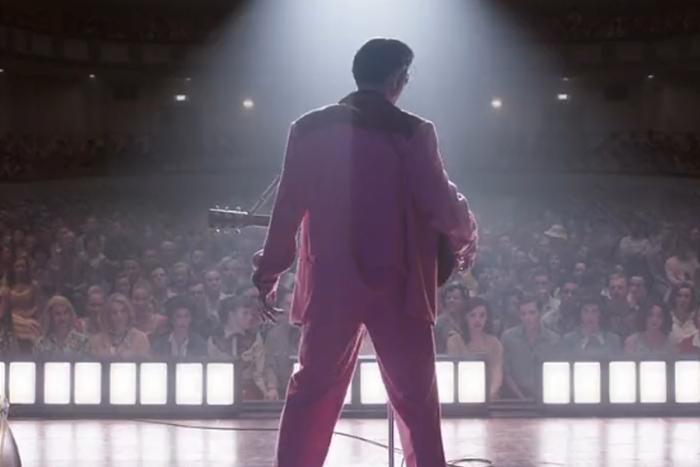 The trailer for the long-awaited biopic of Elvis Presley, simply titled Elvis, premiered today. Directed by Baz Luhrmann, the film stars Austin Butler in the title role while Tom Hanks plays the Colonel, his long-time manager. While little has been revealed about the plot, the trailer suggests that a solid couple of decades of Presley’s life and career will be covered, including his later Vegas years.

First of all — wow that is a heavily groin-forward trailer. So much hip-thrusting. He’s shaking his package like a poisonous snake has latched onto it. Shout out to Baz for knowing what the people want.

I’m a pretty big Luhrmann fan. I think his Red Curtain trilogy is exquisite and consider Strictly Ballroom as a top-five favorite film of mine. Still, I must admit that I’m hesitant when it comes to this film. I get why Luhrmann would feel like a natural fit for the story of one of the gaudy kings of Americana, a man who wore bedazzled jumpsuits and shot at his TVs. Both men are kings of excess and the artifice of fame, but there’s a glossiness to this trailer that’s leaving me oddly cold. It may also just be that I am hugely cynical when it comes to the musical biopic, a stiflingly narrow subgenre of cinema that seldom seems to stray from the tritest narrative conventions. This trailer is definitely hitting a lot of those Walk Hard beats. Presley’s work and all that he represents seems far more interesting than such a formula.

Austin Butler has one hell of a task ahead of him. How do you embody such an instantly familiar figure, one who has been parodied into near-unrecognizable iconography? And how do you do so while covering decades of one man’s life? He’s also going up against national treasure, Chet’s dad, who seems to be playing the Colonel like he’s Colin Farrell as the Penguin. A choice, to be sure, but it’s also a rare opportunity for America’s dad to play a shady creep.

Look, nostalgia is a hell of a drug and musical biopics are huge with both audiences and awards voters. Even if this is a disaster, expect it to lead to a serious rise in the sale of Elvis records and tickets to Graceland. That’s why this thing exists, after all. And also groins.

Elvis is scheduled to be released by Warner Bros. Pictures in the United States on June 24. It will be streamed on HBO Max 45 days after its theatrical release.


← 'Titanic' But With a Cat Is Far Superior To the Original | Bullet Points: 'Fargo,' 'Stranger Things' and a Tale of Two Anti-Vaxxers →