Are You Ready For The Stomach-Turning Feminist Horror Film 'Swallow'?

There’s a special brand of film that crawls under your skin, makes you quiver with discomfort, makes your stomach flip, and then explodes within your heart, leaving you rattled but jubilant. It shocks you with body horror then awes you with its empathy and insight into the messiest bits of being human. I’m talking about some of my favorite movies, like Wetlands, Nina Forever and the soon-to-hit theaters Swallow, a candy-colored horror story about one woman’s dangerous habit and how it might save her from something more sinister.

Check out the first trailer for Swallow.

On the surface, Hunter (Haley Bennett) appears to have it all. A newly pregnant housewife, she seems content to spend her time tending to an immaculate home and doting on her Ken-doll husband, Richie (Austin Stowell). However, as the pressure to meet her controlling in-laws and husband’s rigid expectations mounts, cracks begin to appear in her carefully created facade. Hunter develops a dangerous habit, and a dark secret from her past seeps out in the form of a disorder called pica - a condition that has her compulsively swallowing inedible, and oftentimes life-threatening, objects. A provocative and squirm-inducing psychological thriller, Swallow follows one woman’s unraveling as she struggles to reclaim independence in the face of an oppressive system by whatever means possible.

Writer/director Carlo Mirabella-Davis’s inspiration for his fascinating heroine was his own grandmother, who struggled with rituals of control and was committed to an institution for a time. Mirabella-Davis felt his grandmother’s compulsions came from her need for control, something her life as a 1950s housewife denied her. From this, he created a feminist horror offering that had Fantastic Fest audiences gagging, literally and metaphorically. It was one of our fest faves of 2019, and while it can be hard to watch, it’s a must-see for 2020. 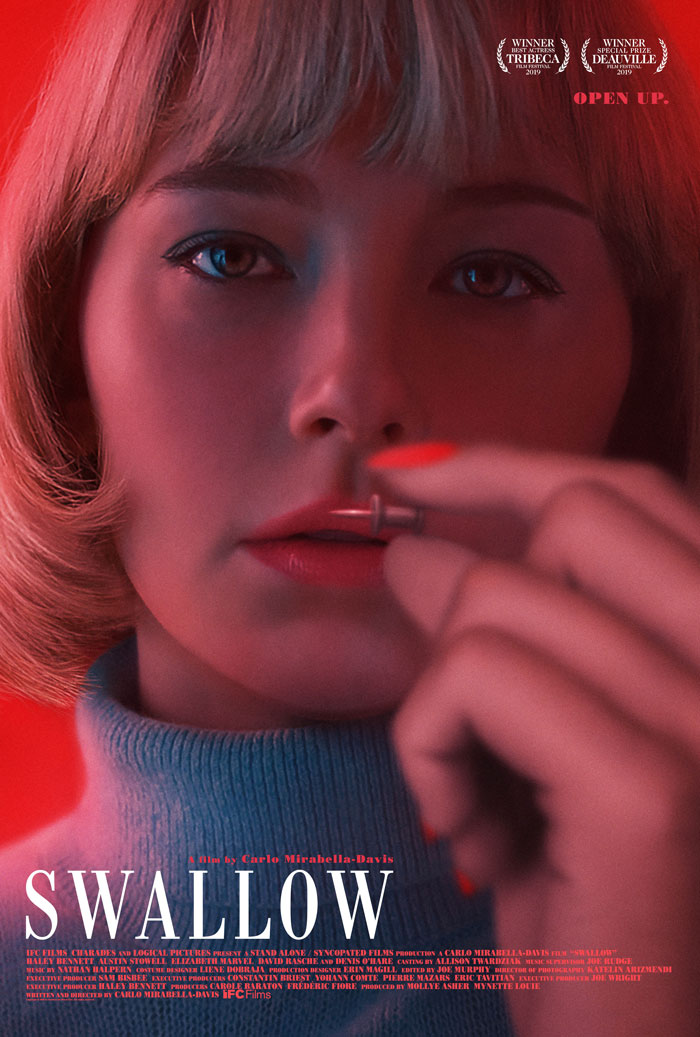