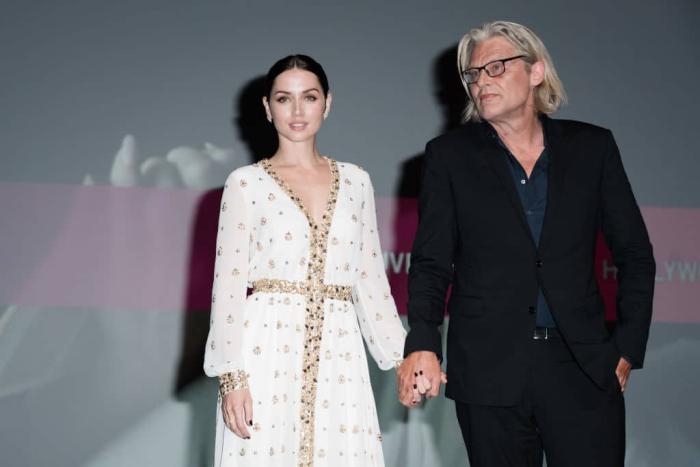 Discourse moves pretty quickly these days, but the endless conversations around Blonde, Andrew Dominik’s controversial reimagining of the life of Marilyn Monroe, surely takes the cake for the most heated pop culture topic of 2022. It’s not hard to see why.

Reviews were sharply divisive, with even the film’s fans taking umbrage with its exploitative tone and depiction of Monroe as a passive victim who never had a happy moment in her entire life. It certainly didn’t help that, every time Dominik was asked about the film, he gave the most pig-headed answers. He dismissed Monroe’s acting talents and asserted that the most interesting thing about her was her suicide. The dude did not get it. Now, he’s doubling down.

Speaking at the Red Sea International Film Festival in Saudi Arabia (an event seen by many as a way for the country’s government to offer a Hollywood-friendly whitewash of its human rights abuses), Dominik dug himself into a deeper hole. He said:

‘Now we’re living in a time where it’s important to present women as empowered, and they want to reinvent Marilyn Monroe as an empowered woman. That’s what they want to see. And if you’re not showing them that, it upsets them.

Which is kind of strange, because she’s dead. The movie doesn’t make any difference in one way or another. What they really mean is that the film exploited their memory of her, their image of her, which is fair enough. But that’s the whole idea of the movie. It’s trying to take the iconography of her life and put it into service of something else, it’s trying to take things that you’re familiar with, and turning the meaning inside out. But that’s what they don’t want to see.’

This weird dichotomy he’s trying to present of ‘empowerment’ versus his version of a real woman’s life doesn’t make much sense. It’s not that we wanted to see Monroe as some sort of girlboss figure, but that Dominik went out of his way to strip her of the historical details and personal qualities that made her so much more than a victim. Blonde never shows Monroe founding her own ground-breaking production company, or her friendships with women like Jane Russell and Ella Fitzgerald, the latter of whom she supported when segregated clubs wouldn’t let her perform. We don’t see her and Arthur Miller dealing with the fallout of the McCarthy witch-hunts, or anything to do with the making of The Misfits. The idea that a woman who was so horribly fetishized and abused could also have been a hard worker who wanted to take on injustice seems to utterly elude Dominik.

I don’t think he understands that, despite Monroe being dead as he so gently notes, image is everything. Monroe is on lunchboxes. Her face sells jewelry. Influencers use misquotes from her to defend their own sh*tty personalities. Her image has been so wholly exploited that the real person barely exists. I’m not just talking about the whole ‘Norma Jean vs. Marilyn’ binary that never made sense and is a lazy way to look at her story. I’m talking about the propagation of the image of Monroe that cements her status as a tragic dead blonde. Dominik doesn’t do much to analyse or subvert that in Blonde. In the moments where he comes closest to understanding the true depths of her struggle, he pulls back to focus on the salacious instead. It sucks.

Dominik seems delighted that he’s made a film that upset and offended so many people. I’m all in favor of subversive and truly challenging art. Frankly, I do agree with Dominik when he says that Hollywood’s gotten ‘more conservative.’ But I don’t think what he offered was a real challenge. Blonde does not challenge; it just strengthens the status quo. To view a woman’s life as ‘victim vs. hero’ is a cultural injustice and a bloody lazy approach to storytelling. Go back to making Nick Cave films. Those are great!


← GOP Outraged About Perceived Constitutional Violation, But Mum On Terminating Constitution | Watch the Trailer for the Fourth and Final Season of M. Night Shyamalan's 'Servant' →