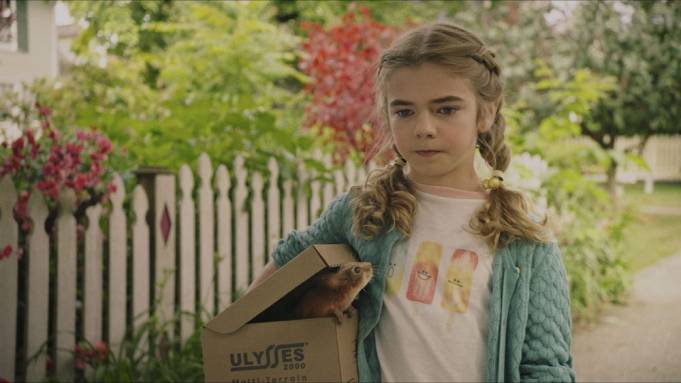 I have kids, but as I mentioned yesterday, I really don’t like “kids movies” and I feel blessed that I have mostly gotten to the other side of those, in part because the pandemic means I never have to watch Tom & Jerry or Trolls 17 or another Minions movie. They stream at home now, so I don’t have to chaperone anyone to the theater to watch them.

I do love a good “family film” — and most of Pixar’s films fall under this category — but I have no patience for kids movies, so when Kristy assigned me Flora and Ulysses, I thought, “Oooh! Is that the new Wes Anderson flick?” Friends, it was not, although it is based on a Kate DiCamillo book, so I’m willing to concede that it’s probably much better than it looks.

But the trailer? It looked decidedly like a “kids movie,” and so I asked the twins to watch it and I told them I’d interview them afterward. Unfortunately, only one of the twins would participate because the other felt so self-conscious about having their words used in public that they bailed, and refused to even allow me to use their initial or another shorthand designation. And so, this interview was conducted entirely with my nine-year-old daughter, L.

The following is a rough transcript of my conversation with L:

It’s about a girl who loves comics. Her mom (Alyson Hannigan) and dad (Ben Schwartz) separated, and her Dad moved away. Flora found a squirrel that got sucked up into a Ulysses robot vacuum, which is why they named the squirrel Ulysses. The vacuum made the squirrel a superhero.

What are his superpowers?

The squirrel can’t talk but can understand what Flora is saying. The squirrel also writes really good poetry and can fly.

Writing poetry is a superpower?

Who is the villain?

The bad guy is the animal control guy. I don’t know his name, but my brother really likes him. (It’s Danny Pudi from Community). He wants to catch Ulysses because Ulysses accidentally destroyed a diner while he was flying around trying to get a donut, and the animal control guy likes the diner waitress, Rita (Kate Micucci). Will you ask me what happens to the bad guy?

What happens to the bad guy?

There’s a cat named Mr. Puffy who hated the animal control guy [his name is Miller]. The cat scratched him so much that [Miller] had to put the cat in the pound. Later in the movie, [Miller] was on a date with the diner lady, Rita, because he had saved her life. Spoilers During the date, we find out that the cat — Mr. Fluffy — is her pet! End Spoilers It’s so funny! And then the cat scratches [Miller] even more. Want to know what happens to Ulysses?

Well, we don’t want to spoil the movie. We just want to tell everyone what it’s about?

Oh, so you don’t get a bad review?

Right. Exactly. So, did Ulysses help Flora with any of her problems?

Yes, actually, he helped Flora’s parents, but he didn’t use his superpowers for that. The neighbor, Dr. Meescham (Anna Deavere Smith), also helped the Dad figure out that he still loved the mom.

Would you call this a kids’ movie or a family movie?

It’s a family movie; it’s fun for the whole family. It’s adventurous. It’s kind of violent sometimes. The Dad gets tranquilized a lot, in the neck and the face. But it’s funny.

That’s what I was going to ask. Is it funny?

It’s not very funny, but it’s funny. Will the people that are in this movie see this, Dad?

Maybe! But probably not. Is it too long?

No, not at all. It’s only an hour and 35 minutes with credits.

Have you read the book?

No, but Kate DiCamillo wrote it, and I’ve ready the Mercy Watson books, and my teacher is reading Because of Winn Dixie to us.

That’s a good movie! It has Dave Matthews in it.

What score out of 10 would you give Flora?

Because I thought it was funny, and the sadness added to the movie. It’s adventurous. I don’t give it a 10 out of 10, however, because I think it was missing something that the book probably has. I have never read the book so I’m assuming.

You know what answer. I’ve told you a million times.

Did you like this movie more or less than Iron Man 3?

Nothing is better than Iron Man 3. It’s my second favorite movie.

I don’t know. I have something better, but I can’t think of it right now.

Did the movie make you think about anything in your life?

Yes. It made me think about a girl that really likes graphic novels, but her Mom makes her read chapter books and novels. That’s like my life. I’m also kind of like Flora because I like graphic novels, and Flora likes to sell stuff for money.

You’ve never sold anything for money.

Did it remind you of anything else?

Yes, it made me think of Penny [our dog]. Penny is kind of like the vacuum because she likes to run around and chase things. Is that your last question?

One more. Would you recommend it to your friends?

Thank you for helping me with this review.

Thank you for letting me. Can I go now?

← Review: 'The Father' is a Brilliant Drama That Will Devastate You in Every Possible Way | Somehow This Feels Like A Loss →