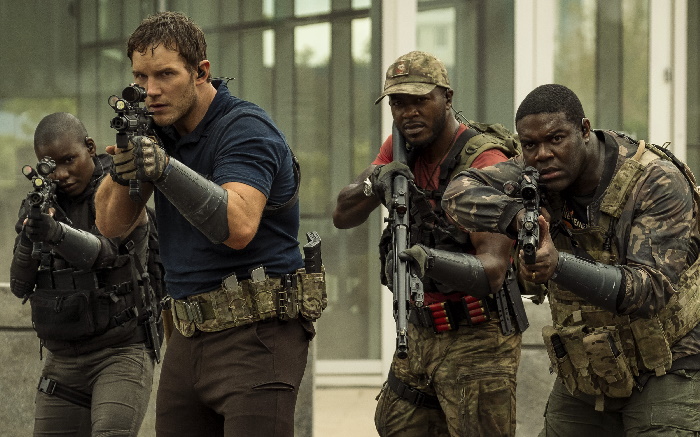 Wow, it’s been a while since I was above the comments section. Don’t worry, I won’t go full Ozymandias on you all… yet.

Here is the first look teaser (NOT a trailer, because that would be simple and straightforward and we don’t get to do that anymore) for The Tomorrow War. It’s based on the 1974 Hugo award-winning novel by Joe Haldeman about humans being embroiled in an interstellar war with the alien Taurens. Fun fact, it has been seen as a response of sorts to Robert Heinlein’s Starship Troopers, which—

… I have been informed that what I’m describing is actually The Forever War. My apologies.


The Tomorrow War is based on the 2005 Hugo nominated novel by John Scalzi. It tells the story of humans being embroiled in an intergalactic conflict with aliens over limited resources. One of the unique twists is that the main character, a 75-year-old retiree, is chosen due to—

… Okay that is actually Old Man’s War. My apologies again.

I got it now. The Tomorrow War is based on the franchise created in Britain in the 1970s about superpowered teens becoming the next stage in human evolu—

OK, so what’s this damn thing about?

In The Tomorrow War, the world is stunned when a group of time travelers arrive from the year 2051 to deliver an urgent message: Thirty years in the future mankind is losing a global war against a deadly alien species. The only hope for survival is for soldiers and civilians from the present to be transported to the future and join the fight. Among those recruited is high school teacher and family man Dan Forester (Chris Pratt). Determined to save the world for his young daughter, Dan teams up with a brilliant scientist (Yvonne Strahovski) and his estranged father (J.K. Simmons) in a desperate quest to rewrite the fate of the planet.

Oh.
I mean, I was close enough.

It stars Yvonne Strahovski (Chuck, the Mass Effect franchise, The Handmaid’s Tale), J.K. Simmons (Spider-Man: A bunch of them, Palm Springs, Invincible), Sam Richardson (Veep, Promising Young Woman, Werewolves Within) and directed by Chris McKay (The Lego Batman Movie). Delayed from its original Summer 2020 release due to the pandemic, it was instead purchased by Amazon for a considerable $200 million, making it the biggest release the megacorporation has on its slate.

Also Chris Pratt is there.

(Before anyone gets bent out of shape, I am capable of acknowledging that Pratt has some talent and charisma while reserving space to say that he has not nearly enough of either to excuse some of his more annoying antics. I never watched Parks and Recreation or Everwood or whatever shows gave people such positive feelings for him pre-Marvel, so I have little in the way of personal investment in his success. You can like him just fine and think Pajiba picks on him too much, but also, I am allowed to feel he’s an exhausting dweeb.)

The Tomorrow War will be available globally on Amazon Prime Video on July 2nd.


Claude Weaver III (aka Vermillion) maintains that the only upside to adulthood is buying all the crap you couldn’t get as a kid, and that’s why he still roams eBay to restore his lost ExoSquad collection. He has a Twitter.