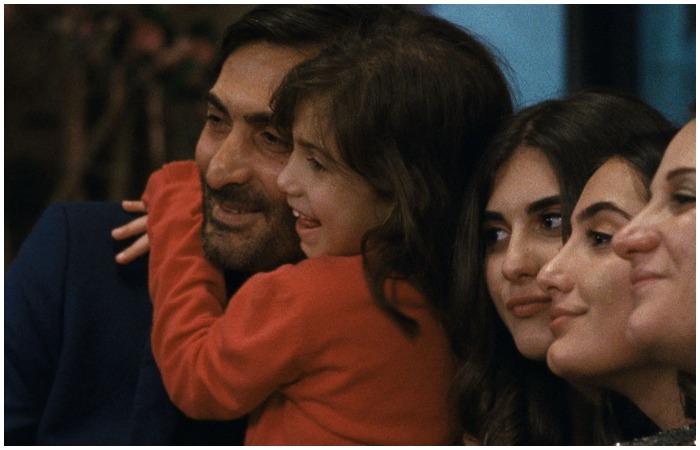 Mafia films are all deeply rooted in family, not only because the mafia themselves are built on blood ties but also because members believe they are doing what’s best for their families. Above all else, the actions taken are as much about gaining power and wealth as it is protecting those they love. Jonas Carpignano’s A Chiara has all of this but also feels like a very different mafia film. Family is Carpignano’s sole focus, with all mafia dealings as background noise. Painful and intimate, in this coming-of-age story about a family whose lives are shattered in an instant, the film is seen through the titular Chiara’s eyes as she picks up the scattered pieces.

Carpignano opens his film by introducing the family at its center. Set in the Italian port commune of Gioia Tauro, Chiara (Swamy Rotolo), her father Claudio (Claudio Rotolo), mother Carmela (Carmela Fumo), and sisters Giulia (Grecia Rotolo) and Giorgia (Giorgia Rotolo) seem relatively happy and normal. They goof around and have the typical teasing and fights between siblings. They are the portrait of perfection. But as we spend more time with them, cracks in this portrait reveal a facade hiding something nefarious.

The first half of A Chiara is spent at Giulia’s 18th birthday party. It can overstay its welcome due to how long some sequences are, like a dance competition, but it’s as if the film is hanging on to moments of bliss for as long as it can. Memories are played frame by frame on a screen during what would be some of the family’s final celebratory moments together. Claudio displays great emotion toward his daughters. They are his life, but he’s hiding another, too. The tone suddenly shifts and the scene turns into slow motion. Chiara watches her father drive off like it’s the last time and we are overcome by a booming sound, drowning out any other noise or dialogue.

The image of a hole appears in the family’s living room floor, suggesting their world is about to break. One night, it does, as Claudio disappears. Chiara is left to figure out why, and the audience is just as in the dark as she is. We feel her frustration as she’s told time and time again that she’s too young to know or understand why her father left. Her mother and sister keep her in the dark to protect her, but it may only cause more harm. In her determination, Chiara discovers what her family has been hiding: that Claudio is in the mafia. As a result, she must make tough decisions about what she wants for herself and her future. Carpignano shows us how courageous those decisions are to make.

The thing that makes A Chiara truly special is that it’s a family affair. The family in the film is family in real life, creating a documentary-esque realism to the piece. While the narrative that surrounds them is fictional, having them act together brings a more profound and emotional thematic experience because of their real bond. When it’s discovered that Claudio is in the mafia, the effects of that, especially on Chiara, and the resulting separation within the family are much more painful to watch when you realize that the film is being told through the perspective of a real family. Having the film take the viewpoint of a 15-year-old girl, too, presents an examination of the mafia from an innocent on the outside, turning this film into one about a father’s relationship with his daughter and how a father’s decisions can affect his children.

It’s a coming of age in one of the most heartbreaking ways, but thanks to Swamy Rotolo’s performance, we are enthralled in this drama from start to finish. She evokes so much in her eyes; a gaze far away from reality as she tries and fails to get back to whatever normal is. You feel her anger and hurt when everyone refuses to tell her what’s going on. This secrecy is harmful and she acts out often with immaturity, but you feel the bravery it took for Chiara to go off on her own in search of the truth.

A Chiara deepens all the core emotional moments that mafia films carry and challenges how the genre in the past has been able to capture the love and strength of family that keeps their narratives bound. It’s no wonder that Carpignano won Cannes’ Directors’ Fortnight Award - he has created something truly special.


← Beto O'Rourke Interrupts Texas Gov. Greg Abbott's Press Conference About the Uvalde Shooting | J.J. Abrams Could Be Getting the Axe at Warner Bros. →