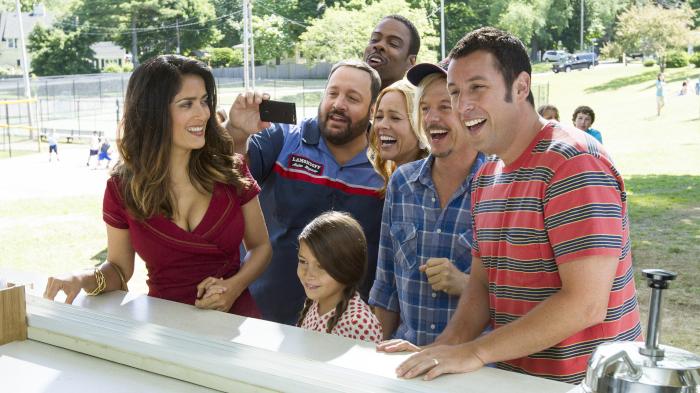 It’s been nine years, this month since I was subjected to Grown Ups 2. There is not a single redeeming moment in the film. There is not a single laugh to be had. There is only the pain of knowing that each scene will, unfortunately, be followed by another scene, and each subsequent scene will force you to confront the decisions you made in your life that led you to this place, watching a poorly improvised pastiche of sketches — many of them abandoned due to indifference — featuring actors who simply do not care. Adam Sandler is working under the belief that, if he puts his name on the poster and surrounds himself with enough familiar faces, people will watch without any concern whatsoever for what is actually on the screen.

There is nothing salvageable in Grown Ups 2. It is a bowl of dicks crammed into a bag of assholes trapped inside of a black hole of stupidity. If you choose, however, to see Grown Ups 2, these are the images that you will be forced to endure.

3. David Spade’s character gets inside of a Monster Truck-sized tire, and during a six or seven-minute scene during which I aged three years, the tire rolls down a hill, destroying everything in its path until it bounces off of Shaquille O’Neal and falls quietly on its side, at which point, Spade projectile vomits 15 feet across the road and onto a nearby police officer.
4. The toddler son of Maya Rudolph and Chris Rock craps his diaper and affords his mother an excited poop dance, as though he has just scored a touchdown in the Super Bowl.

5. After the blitzed-out bus driver played by Nick Swardson passes out and Adam Sandler takes over bus driving duties, the school children stick Cheetos in Swardson’s nostrils. He pulls them out and eats them.
6. During an extended product placement for K-Mart, Nick Swardson strips to his boxers, takes a nap in one of their demo beds, and when he wakes up, he walks over and takes a dump in a demo toilet. During this entire time, Swardson’s drug-fueled split personalities yell at each other.

7. Kevin James does a combination sneeze/burp/fart four times during the movie. David Spade does it once, and Adam Sandler does it once right before he has sex with his wife, Salma Hayek. This is what passes for a running gag.
8. Shaquille O’Neal dances. Shamefully. More than once. The sneeze/burp/fart combinations are less
9. There’s a running gag involving Tim Meadows’ family, all of whom have Ronald McDonald baldness, and all of whom attempt to introduce a “WHUUUUUUUT” catchphrase. It is pathetically unsuccessful. The Meadows’ spawn is also some kind of rapping Urkel.

10. During a gym class, Dan Patrick — in short shorts — climbs a rope in such a way that the audience is given a close-up look at his testicle brain. It’s one of several times during the movie we are given close-ups of men in short shorts and the outline of their testicles.
11. The husbands all anxiously attend a little girls’ ballet recital so as to gawk at the cleavage of the ballet instructor, in front of their wives, who are oh-so-appropriately understanding and even encouraging.

12. Jon Lovitz plays a perverse janitor, who arrives at a yoga class early to lead the women in simulated sex acts, while he gazes upon them lasciviously. Likewise, he gets off on the ballet instructor. The wives in the yoga class, meanwhile, slobber all over the yoga instructor (Oliver Hudson), and at one point, Maya Rudolph asks if she can “stick my tongue all the way down your throat.”

13. There’s a running joke about a musclebound woman who looks like Hulk Hogan. Maya Rudolph suggests that her G-string is actually a jockstrap and makes several insinuations that she has a penis. Maya Rudolph was in Away We Go. How is it that she allowed herself to make bad jokes of a homophobic nature?

14. That same woman is David Spade’s girlfriend. At one point, he makes out with her bicep. There is extended tongue action. WITH HER BICEP.
15. The four leads are forced to cliff dive naked. Adam Sandler belly flops on his testicles. A naked Kevin James, leaping from the cliff, lands testicle first on David Spade’s head. Spade makes some kind of joke about being trapped briefly inside of his asshole, which to be honest, is a better place to be than inside a theater screening Grown Ups 2.

16. A blonde Milo Ventimiglia and Taylor Lautner play the villainous frat boys. They engage in extended handshakes, make racial and homophobic jokes, and deliver maybe the worst dialogue ever written for a major studio film, including at one point calling the townspeople “fart heads.” FART HEADS.

17. There is a scene that involves Colin Quinn attempting to fix a soft-serve ice cream dispenser, in which it appears the chocolate ice cream squirts out from his ass. This scene is at least three minutes too long.

19. Nick Swardson, in a moment in which he reveals that he’s gay, attempts to make out with Oliver Hudson and, with his eyes closed, ends up in a prolonged make-out sesh with a Great Dane with a mohawk.

20. Steve Buscemi, who has FIVE Emmy nominations, is reduced to dressing up as Flavor Flave at an ’80s party and delivering a cringeworthy, “Yeeeeaaaah Boooy.” I wanted to cry.
21. In an effort to show her husband, Kevin James, that she’s OK with him gawking at women, Maria Bello takes him to a car wash run by high school girls in bikinis. However, in a last minute switch, a group of men — basically the entire existing and past male cast members of “SNL” and the Lonely Island still under the age of 35 — f*ck the car to Mario Bello’s delight. Warrant’s “Cherry Pie” plays during the sequence. Taran Killam makes out with the windshield.

22. Peter Dante — one of the Sandler regulars — gives Shaquille O’Neal a car wash and insists upon getting the right on up in there.
23. Richie Minervini, another Sandler regular whose character name is “Principal Tardio,” is overweight, wears belly-exposing shirts, and at one point, pulls a Fruit Loop out of his navel and eats it.

24. During a fight sequence at the end of a movie, one of the frat guys is basically suffocated by a guy’s balls.
25. The elk from the beginning of the movie arrives again at the end and essentially gnaws at Taylor Lautner’s testicles through his jeans. That is the film’s climactic moment.

← How Do You Cover An Uncoverable Song? Well, Like This. | Has the Netflix Algorithm Finally Eaten Itself? →