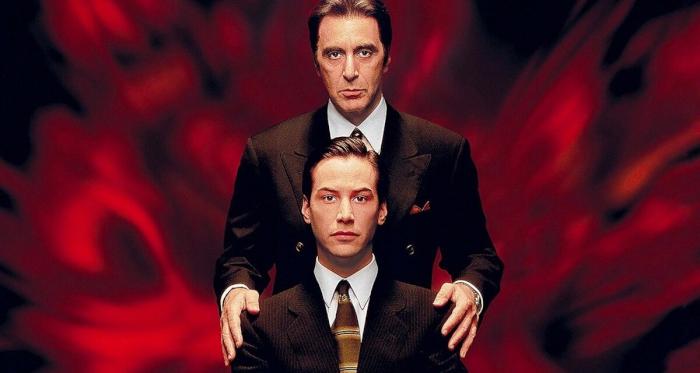 After TFG was elected President back in 2016, I used to hate all those stories about random connections between him and the entertainment world, like his cameo in Home Alone 2 or the time he appeared as himself on The Fresh Prince of Bel Air.

While I’m sure this has been shared before, I nevertheless got a huge kick out of Tony Gilroy — the screenwriter behind Andor, the Bourne movies, Michael Clayton (which he also directed) and, uh, The Cutting Edge — telling Marc Maron on this week’s WTF podcast why they used TFG’s apartment for The Devil’s Advocate, which Gilroy also wrote.

The film, which stars Keanu Reeves, Charlize Theron, and Al Pacino, may have been a box-office hit at the time (it made over $150 million), but Pacino — as the Devil himself — received some mockery for his over-the-top performance, which I think most of us have come to appreciate in the years since its release. (“Al will eat anything that comes his way,” is how Gilroy describes him). Pacino plays Satan as an absentee landlord, and where exactly might Satan himself live? In Donald Trump’s actual apartment, of course.

“Oh my god. The Trump sh*t. F**k man, it’s his apartment. The killer real-estate molester? We shot in his apartment. We needed the ugliest, most garish, horrifying real-estate developer apartment we could possibly find, and Trump threw his apartment at us. We didn’t have to [do anything]. If you look at the movie, that’s his f**ing sh*t-bag apartment with all Versailles gilt and the high-rise windows. It’s just so perfect.

He came by the set every day. Because he was living there. He’d come by the set and poke around … he was a clown. I’ve been in New York since 1979. I’m with him … he’s a f**king clown. You know, just that grifter clown kind of loser outsider, pretend rich guy. [To the actual titans of New York], he was lint.

He would come by on the way to the office, peek by and try to see Charlize. Everyone was laughing at him. Laughing at his apartment.”

Here it is in action:

Gilroy said they also threw a big party for the movie and invited all the New York bigwigs, and while he didn’t expect anyone to show, they all came, even though it was specified for the movie that the party would be held in Satan’s apartment.

If you’re a fan of Michael Clayton (one of Marc Maron’s favorite movies) or Andor, it’s a great podcast episode. Gilroy has been in the business a long time and has a lot of stories.


← The Death of Theatrically Released Comedy: Exhibit B, 'Bros' | Will Smith Is Coming Back Sooner than Originally Expected →