'The Suicide Squad' Trailer Is Here, And You Can Breathe Easy: Margot Robbie As Harley Quinn Is Still Awesome

Whether you loved it, thought it was just middling, hated it, really hated it to the point where you just don’t understand why so many people in the DCEU fandom are clamoring for Warner Bros. to #ReleaseTheAyerCut even though there was a lot of behind-the-scenes interference that led to a movie-trailer company being granted permission by Warner Bros. to edit and create an entirely different cut of the movie, Suicide Squad was a box-office hit to the tune of $746 million worldwide, and it went on to win an Oscar for Best Hair and Make-up. (Which hasn’t stopped people from complaining that said Oscar should’ve gone to Star Trek Beyond instead).

So it’s not very surprising that Warner Bros. and DC gave the green light for a sequel to be made. Granted, this one isn’t written and directed by David Ayer (I can practically hear cheers coming from Roxana’s home whenever this is pointed out) and Will Smith doesn’t return as Deadshot (though he really was one of the best things about the first film), and we also won’t be seeing Jared Leto appear as The Joker (seriously, I’m starting to go deaf from all of the cheers coming from Roxana). Instead, it will be writer/director James Gunn of Guardians Of The Galaxy and Guardians Of The Galaxy Vol. 2 and Tromeo and Juliet fame helming this one, and from the looks of this red-band trailer, he’s taking full advantage of the film’s R rating.

Here’s the trailer for The Suicide Squad. Be advised: it’s not for the squeamish.

From the horribly beautiful mind of @JamesGunn, #TheSuicideSquad hits theaters and @HBOMax August 6. Watch the Official Red Band trailer now, ❤️ to subscribe, and be among the first to receive content up until release! pic.twitter.com/O4fw1pbvXO

And here are some horribly beautiful photos from the film for all of you to look at. 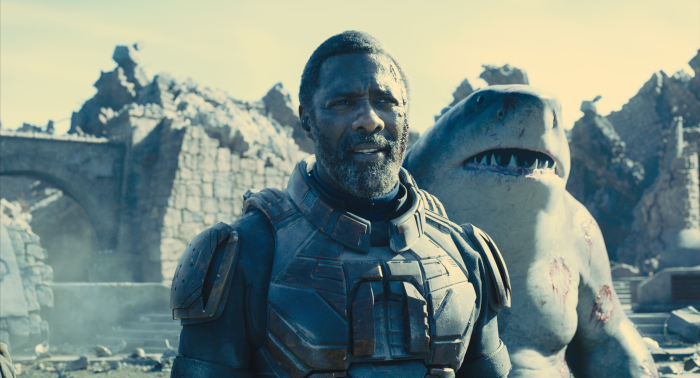 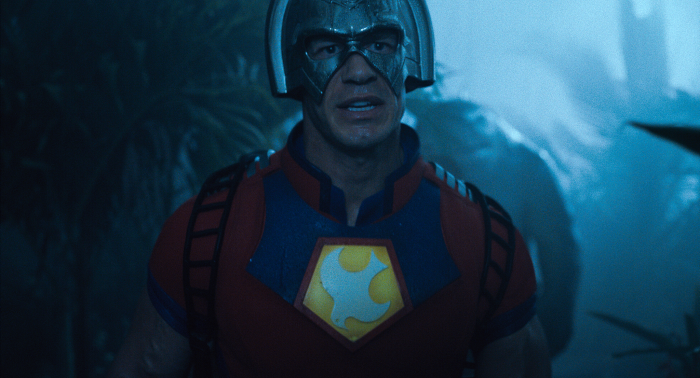 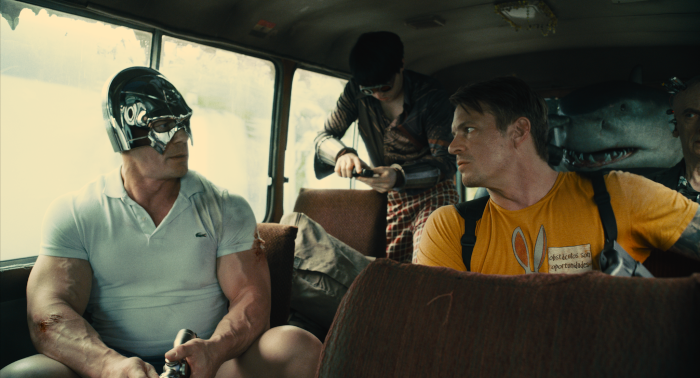 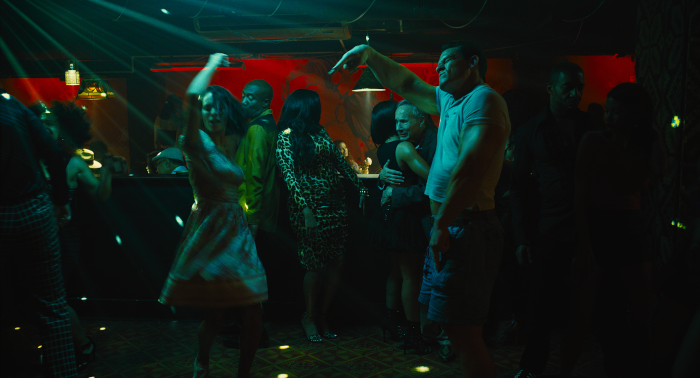 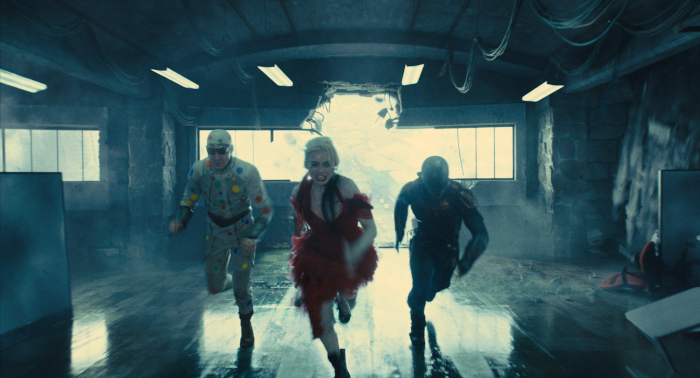 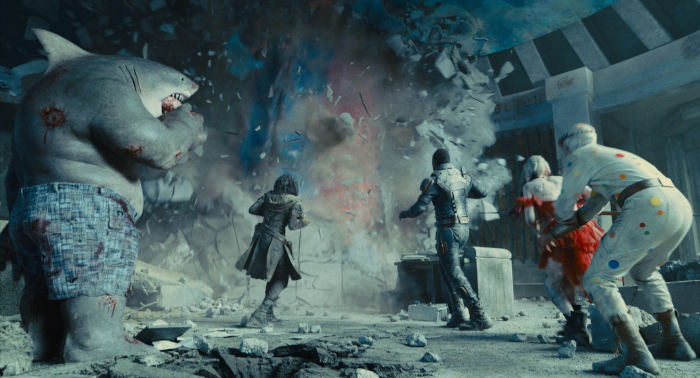 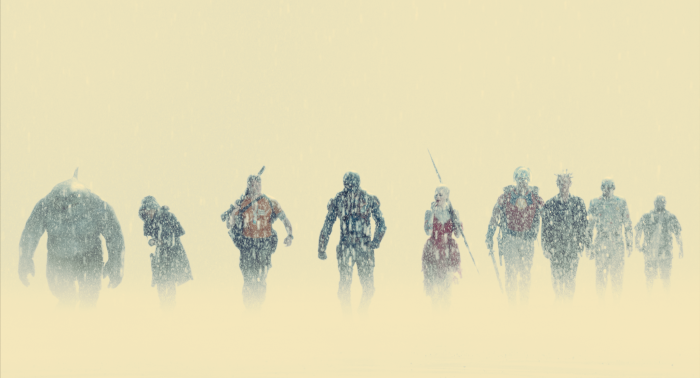 Here is the official synopsis that explains what the film is actually about, for those of you who are wondering, “What is this film actually about?”:

“Welcome to hell — a.k.a. Belle Reve, the prison with the highest mortality rate in the US of A. Where the worst Super-Villains are kept and where they will do anything to get out—even join the super-secret, super-shady Task Force X. Today’s do-or-die assignment? Assemble a collection of cons, including Bloodsport, Peacemaker, Captain Boomerang, Ratcatcher 2, Savant, King Shark, Blackguard, Javelin and everyone’s favorite psycho, Harley Quinn. Then arm them heavily and drop them (literally) on the remote, enemy-infused island of Corto Maltese.”

The Suicide Squad stars (takes deep breath) Margot Robbie as Harley Quinn, Idris Elba as Bloodsport, Joel Kinnaman as Colonel Rick Flag (and no matter how many movies and television shows I see Kinnaman in, I will always hear him in my head saying “Yo, Linden!” as only he can), Viola Davis as Amanda Waller (the baddest of all bad bitches, and I say that with the greatest of respect), John Cena as Peacemaker (yes, he’s still getting his own spin-off on HBO Max and yes, there are still some people who hate this idea and hate that he’s getting a spin-off instead of Jurnee Smollett as Black Canary and/or Mary Elizabeth Winstead as The Crossbow Killer Huntress from Birds Of Prey), Jai Courtney as Captain Boomerang, Peter Capaldi as Thinker, David Dastmalchian as Polka-Dot Man, Michael Rooker as Mary Poppins, y’all Savant, Daniela Melchior as Ratcatcher II, Pete Davidson as Count Chocula Blackguard, Nathan Fillion as T.D.K., Sean Gunn as Weasel, Storm Reid as Tyla (daughter of Bloodsport), Alice Braga as Sol Soria, Flula Borg as Javelin, Mayling Ng as Mongal, Taika Waititi as ???? (that’s not a character name, it just hasn’t been revealed who he will be playing in the film), and last but not least, Sylvester Stallone as John Constantine’s ex-boyfriend, King Shark.

(For those of you hoping to see return appearances by Karen Fukuhara as Katana, Adewale Akinnuoye-Agbaje as Killer Croc, or Cara Delevingne as Enchantress, it doesn’t look like they’ll be showing up in this film)

Depending on who you follow and interact with on Twitter, you will probably notice that there are those in the DCEU fandom who aren’t very happy with the film or the trailer, for their own reasons. Some of them suspect that Warner Bros. decided to drop the trailer (and announce that Promising Young Woman writer/director Emerald Fennell will be writing the screenplay for Zatanna) this week to divert attention away from the highly popular #RestoreTheSnyderVerse hashtag that is being tweeted to let the studio know that they would love to see sequels and spin-offs for Zack Snyder’s Justice League (and not just from Snyder himself, but from other directors with their own visions as well) instead of everything being rebooted as if the Multiverse doesn’t exist. (And also to divert attention away from Ray Fisher continuing to call them out on all of their bullsh*t) Others have no interest whatsoever in watching The Suicide Squad and hate the fact that it was made by James Gunn, because they hated his juvenile and misogynistic sense of humor in the Guardians Of The Galaxy films and don’t think that said humor will be a good fit for The Suicide Squad, because they think that he’s actually a pedophile, and because they really hate the fact that he used to make a whole bunch of now-deleted jokes on Twitter (jokes that got him fired by Disney from the upcoming Guardians Of The Galaxy Vol. 3, only to be re-hired not too long afterwards, partly thanks to online campaigns on his behalf, such as the #RehireJamesGunn hashtag) that not only made him seem like a pedophile, but were just straight-up horrible and misogynistic.

Then there’s also the matter of Gunn being accused of trying to act as if he wrote the first Guardians Of The Galaxy film all by himself without any assistance whatsoever from Nicole Perlman, who co-wrote the screenplay and who later went on to co-write Captain Marvel. And the fact that Gunn was able to make The Suicide Squad without any of the usual behind-the-scenes interference from Warner Bros., but Zack Snyder and Patty Jenkins and David Ayer and Cathy Yan weren’t given that same courtesy with their own DCEU films has only added more fuel to the fire when it comes to their antagonism towards him.

Yeah, I know. It’s a lot to take in, and there really is never a dull moment when it comes to the DCEU.

The Suicide Squad opens in theaters and streams on HBO Max simultaneously on August 6, 2021. 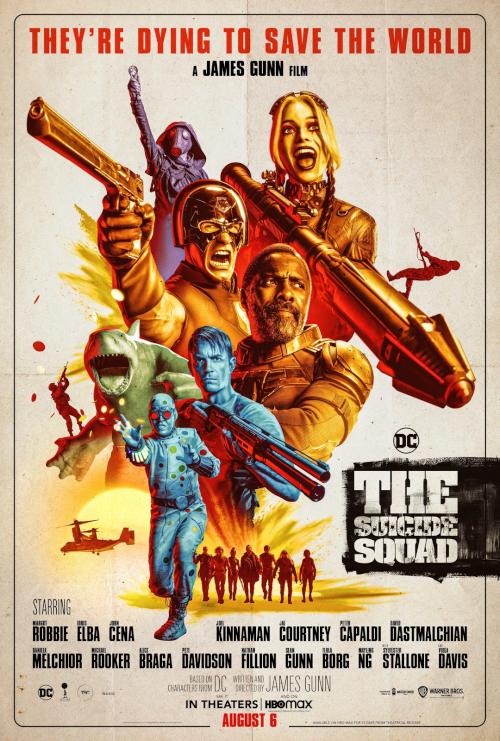 ← Review: From the Mad Mind That Brought Us '[REC]' Comes 'The Vault' | 'Six Days in Fallujah' Is Reprehensible →