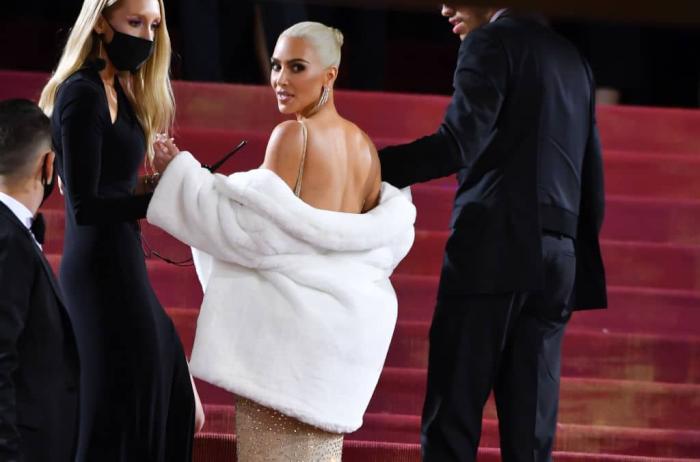 You’re Allowed to Be Upset About Marilyn Monroe’s Dress

For around 25 minutes, Kim Kardashian walked the carpet of the 2022 Met Gala wearing one of the most iconic gowns of 20th-century pop culture: the dress worn by Marilyn Monroe when she sang ‘Happy Birthday’ to President Kennedy. Kardashian was allowed to wear the delicate garment because it was loaned out to her by its owner, Ripley’s Believe It Or Not!, which paid $4.8 million for the dress at auction. Because the dress did not fit, despite her claims that she underwent an extreme weight-loss regime to do so, Kardashian covered her back with a fur stole. Once off the red carpet, she switched into a replica for the rest of the evening. The dress is now back in the hands of the tourist attraction that purchased it, but it now seems to show the signs of damage from Kardashian’s brief fashion moment.

A post shared by The Marilyn Monroe Collection (@marilynmonroecollection)

Scott Fortner, a collector who works to authenticate and verify Monroe memorabilia, appeared to show stretched and buckled fabric and missing crystals on the back of the dress on his Instagram account. He also showed tearing in one of the gown’s straps. It’s evident that, even with the supposed utmost care taken by Ripley’s and Kardashian’s team to preserve the outfit, some irreversible damage was done to a piece of fashion history. These items are extremely delicate, liable to rip with a mere deep breath, and are kept in pinpoint precise conditions to preserve them for decades or even centuries. That the business even offered to let someone wear the item is the stuff of archivists’ nightmares. Ripley’s defended its decision by talking about how they ‘always ensured that at any time we felt that the dress was in danger of ripping or we felt uncomfortable about anything, we always had the ability to be able to say we were not going to continue with this.’ As a private company, they aren’t beholden to any sort of real museum standards and can do with Monroe’s dress whatever they please. Still, given the history of Monroe and the ways she was objectified and commodified in life and death against her will, the misuse of this dress feels like a sad continuation of that history.

I’ve been writing about pop culture and celebrities for several years now, so I’m all too used to hearing the smarmy cries of how stuff like this just isn’t important. It’s silly to care about a person, a dress, a movie, etc, apparently. Monroe’s dress has elicited similar responses. Why get worked up about a piece of fabric when there are so many bigger and more pressing issues to deal with? This is rich people’s problems, right? What an exhausting way to live, to be so blindly dismissive of everything that doesn’t meet your ever-changing and unreachable standards of merit.

You’re allowed to care about the dress. You’re allowed to care about fashion. You’re not ignoring the issues of our planet by taking time to think about this small part of pop culture. History deserves to be protected for future generations and, yes, fashion counts as part of this. Kardashian wore Monroe’s dress to a gala designed to fundraise for this exact purpose, which makes her decision to wear it all the more baffling.

I talked before about the ways that Monroe’s legacy was sold off piece by piece despite what she asked for in her will. The widow of Lee Strasberg, Monroe’s friend and mentor to whom she left everything after her death, placed basically every item from her life into an auction house for the highest bidder. Even though Monroe had asked Strasberg to distribute her most prized possessions among her closest friends, they ended up as the hottest commodities on the private market. If you had enough money, you could buy pretty much anything from Monroe’s belongings: clothes, receipts, poems, kitchenware, even prescriptions. If Monroe was in any way associated with it, then it could be expected to sell for thousands, even millions of dollars. Like her Kennedy dress. A corporation owns her likeness and name, to be slapped onto any product or advertising campaign. Monroe is worth more now as a dead woman than she was during her life, when she was endlessly dismissed and devoured upon for personal and corporate gain.

For many Monroe fans, the decision of Ripley’s to pass around her dress like it’s a rental prom gown felt tacky at best and cruel at worst. It was another reminder of how Monroe’s autonomy had been diminished time and time again, a matter made all the creepier by their gifting of some of Monroe’s hair to Kardashian. Her body still isn’t sacred, almost 60 years since she passed.

I saw many people say that they couldn’t blame Kardashian for wearing the dress. Wouldn’t you if you had the chance, the clout, the money? But therein is the other problem with this, and why being upset is perfectly acceptable. The rich are able to turn everything into their personal playground, history included. They can buy up the most beautiful artworks and hide them from the world for decades to help ease their future inheritance taxes. Historic buildings and communities can be gutted out for car parks and palatial estates. History is the personal playground of those with the cash to splash, and the damage inflicted upon it is seen as a mere oopsie to be paid off. It’s not just Monroe’s dress. It’s everything she ever owned, as well as the public art, culture, and ideas that have been snatched from communities in favor of singular profits and inevitable tax avoidance. Given how horrendously underfunded museums are, and how heavily gutted arts and humanities departments have been in universities worldwide, it doesn’t seem unreasonable to imagine a future where all of our most astounding institutions will become toys for rent for the 1%. The dead will be further disrespected and fetishized as less than human (not that the living will be exempt from this.) So no, it’s not just about a dress. Stay tuned for the Smithsonian loaning out Dorothy’s ruby slippers to Jeff Bezos’ girlfriend for his next space trip.


← In 'Cha Cha Real Smooth,' the Actor/Writer/Director Can't Stop Obsessing Over Himself | 'The Boys' S3 Ep. 4 Recap: I Learned It by Watching You! →