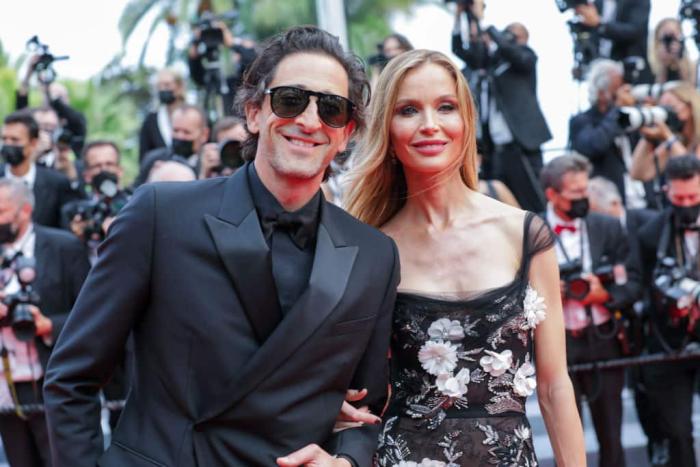 Sometime around December 2019, reports emerged claiming that Adrien Brody was dating Georgina Chapman, the designer behind the fashion brand Marchesa, who is arguably better known for being the ex-wife of Harvey Weinstein. There didn’t seem to be any trustworthy coverage of this new celebrity pairing, although we did see a couple of very fuzzy photographs of the pair looking friendly but not wildly romantic.

Well, it turns out that they are dating, and they are now fully milking the red carpet power couple spotlight. Brody is currently in Frances for the Cannes Film Festival, where he is promoting his latest film, Wes Anderson’s The French Dispatch. The pair were arm in arm at the film’s official premiere, where the movie is playing in competition for the Palme d’Or. She wore her own brand. He was in all-black. They smooched. It was all very glamorous.

This actually isn’t their first official event as a couple. They cozied up on the red carpet for another film festival, Tribeca, last month. I missed that entirely and am disappointed in myself.

This is a fascinating couple, and one that has to tread some tricky territory in the public eye. Chapman will forever be known as the ex Mrs. Weinstein, an undeniably cruel fate. She’ll also be questioned for many years over her possible awareness of her former husband’s abuses (she has denied any prior knowledge of Weinstein’s crimes while married to him.) Celebrities seem comfortable once again wearing Marchesa but many others will remember the stories of Weinstein threatening actresses into wearing his then girlfriend’s clothes, and how controlling their fashion choices was one of the many ways he terrorized women. I imagine being under this shadow is a tough way to live, especially when your two young daughters call that convicted rapist their father. It’s also super problematic to blame a woman for her husband’s violent abuses. We don’t know what life was like behind closed doors, even as the Weinstein-Chapman family spun fairytales of their love to the likes of Vogue.

It is interesting, at the very least, to see Chapman choose to date another very famous man, a pairing that will inevitably require red carpet appearances and an increase in press scrutiny. I think people are generally pretty sympathetic towards Chapman. One gossip report said she liked Brody because he was ‘unusual and interesting.’ Sure! That’s one way to describe a guy you’re into.

But we must ask the tough questions here, the one I know you’re all eager to know: Will Adrien Brody buy Georgina Chapman a castle?! I need a full cheesy 30-page photoshoot of the pair, just like what he did with Elsa Pataky. Come on, we deserve this!

← Pixar Brings the Fluffy with 'Turning Red' | 'I Love You For This,' Vanessa Bayer →