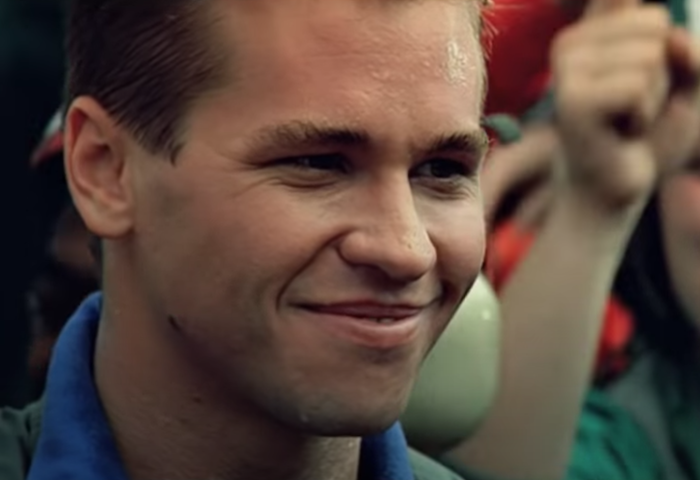 If my thoughts on Val Kilmer, who should have won an Oscar for Tombstone, aren’t clear to you, I will be very blunt: I. Love. Val. Kilmer. He is green eggs and ham to me, which means I like him any day, any way, and especially if he’s singing to a bunch of crying, screaming East German teenagers … on a Sunday (gotta keep that rhyme going!):

With my Val Kilmer bonafides secured, we can proceed because what I’m about to share with you might shock you to your core and you need to know you are with people of a like mind about Val. See, even though we are in possibly one of the worst timelines, Val himself revealed that there was an even worse timeline that could have been—one where he didn’t play Iceman in Top Gun. Yes, you read that correctly—the chomp heard round the world almost wasn’t. I’ll let People.com explain—

The 60-year-old actor revealed in The Daily Beast’s exclusive excerpts from his new memoir I’m Your Huckleberry that he originally did not want to star in the 1986 action film Top Gun.

“I didn’t want the part. I didn’t care about the film. The story didn’t interest me,” Kilmer admitted. “My agent, who also represented Tom Cruise, basically tortured me into at least meeting Tony Scott, saying he was one of the hottest directors in town.”

Kilmer said he “showed up looking the fool, or the goon” at his audition for the role of LT Tom “Iceman” Kazansky.

“I wore oversize gonky Australian shorts in nausea green,” he recalled. “I read the lines indifferently. And yet, amazingly, I was told I had the part. I felt more deflated than inflated. I had to get out of there.”

“The moment I got into the elevator, the director ran after me and slid his arm in to block the door,” Kilmer said. “He blurted his truth in his chipper British accent: ‘I know that the script is insufficient, but it will get better, Val. Wait until you see these jets. They take your breath away.’ “

Excuse me one moment while I freak out about time and how we’re all getting older because somehow I didn’t realize Val was 60. In my mind he’s 35, and, well, I’m 35 so clearly my math is off.

The good news is that sometimes we do get a win, so in this timeline, good won out in a small way and Kilmer became Iceman, and perhaps more importantly, party to the greatest beach volleyball game of all time.

One cannot top that kind of perfect above in the clip, so I’ll see myself out now.