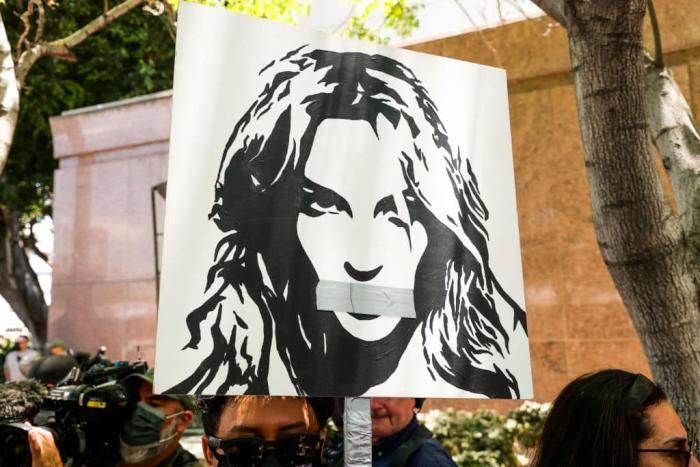 Why the Fight for Britney Spears’s Reproductive Freedom Matters

Yesterday, Britney Spears spoke out in a court hearing over the conservatorship that has controlled her life for 13 years. For the first time, the singer was able to say in her own words how she felt about the legal tangle that has dictated every part of her personal and professional life since 2008. That was the year her father, Jamie Spears, was granted total control over her affairs by court order following her very public struggles with mental health. Speaking on Wednesday via telephone to a judge in Los Angeles, the pop star said she was traumatized and cried every day. What followed was a 20-minute address that shocked even the most die-hard #FreeBritney supporters. Spears detailed how she had been put on the drug lithium against her wishes and that it made her feel drunk and unable to talk. Her disturbing testimony also alleged that her father and management forced her to perform against her will, that her boyfriend is also prohibited from driving her in his car, and that she is blocked from seeing some of her friends.

In a statement full of shocking revelations, there was one that proved especially heinous. Spears detailed how she would like to marry again and have more children, but that the conservatorship forbade it. Spears said, ‘I have an IUD in my body right now that won’t let me have a baby and my conservators won’t let me go to the doctor to take it out.’ It was a moment that left most of us slack-jawed in shock. Planned Parenthood even released a statement of solidarity with Spears, noting that ‘your reproductive health is your own — and no one should make decisions about it for you.’

We were painfully aware of how devoid of freedoms Spears has been for many years, but there was something about this detail that just hit harder for a lot of people. The label of ‘bad mother’ was lobbed at Spears for years during the most vicious period of media hatred she faced. Parasites like Perez Hilton made sport of such smears and they became commonplace on the cover of many a tabloid (a lot of those same people are now seemingly surprised by recent developments, and I have a lot to say on that, but not right now.) The nastiness directed at Spears rang true for many women over the centuries whose parenting abilities were called into question and used as an excuse to enact the most appalling of legal decisions.

The history of forced and compulsory sterilization and the stripping of reproductive freedom from certain people is a long and sordid one, not just in America but worldwide. In 1927, the infamous Supreme Court case of Buck v. Bell decreed that the forced sterilization of a young woman named Carrie Buck, and other people deemed intellectually disabled, did not violate the Due Process Clause of the Fourteenth Amendment to the United States Constitution. The then-18-year-old Buck, as well as her mother, were forcibly sterilized after being deemed ‘feeble-minded.’ It was decreed that their constitutional rights did not outweigh the supposed interest of the state. During the subsequent Nuremberg trials following the Second World War, wherein various Nazi officials faced the court, the counsel for one defendant, Otto Hofmann, the head of the SS Race and Settlement Main Office, cited Justice Oliver Wendell Holmes, Jr. and his ruling on Buck v. Bell as a defense.

While other rulings have somewhat weakened Buck v. Bell in the ensuing decades, it was never expressly overturned. Forcible sterilization still happens on American soil. In 2013, it was revealed that 148 female prisoners in two California institutions were sterilized between 2006 and 2010. The program was said to be ‘voluntary’ but it was later revealed that the women did not consent. The state of California finally banned sterilization in prisons, unless the procedure is required to save a patient’s life. In 2020, multiple human rights groups joined a whistle-blower to accuse an ICE detention center in Georgia of forcibly sterilizing undocumented women. More than 40 women submitted testimony in writing to document these abuses. Much of the 20th century was mired by the mass sterilization of African American women, Indigenous women, and Latinx women. The forced sterilization of trans people for legal gender recognition is legal in 20 countries across Europe. Eugenics never went away.

I bring all of this up in connection to Spears because the revelation about one of the most famous women alive being stripped of her reproductive freedom is horrific and shocking, but it shouldn’t surprise us either. The Spears case has always been one of feminist liberation but it’s also a disability rights issue. As Sara Luterman detailed for The New Republic earlier this year, the conservatorship system that controls Spears highlights how the rights of the disabled are all too easily tossed aside by the state with absolute impunity. Luterman writes, ‘Conservators have an enormous amount of power over their conservatees, and there are few, if any, checks on that power. Despite that kind of absolute control, conservatorships are often seen as fundamentally benign. The question of basic self-determination is treated as an afterthought.’ If you are perceived as having some kind of disability, be it physical, mental, or intellectual, your choices and freedom are quickly denied in favor of ‘your best interest’ as dictated by an outside source.

Spears has spent most of the past 13 years working without break, recording albums and going on worldwide tours, and headlining a wildly profitable residency in Las Vegas. She has done all of this while being seen as too ill to make her own choices. There’s an entire legal framework propping up this sheer hypocrisy, and it’s all done in the name of ‘keeping Spears safe’ from herself, but not those wielding the leash. Spears is but one of countless nameless individuals who have seen their basic freedoms and reproductive independence ripped from them by a system that has operated for centuries under the assumption that those with disabilities, real or perceived, aren’t fully human. It should terrify and anger us just how easy it is for the state to strip people of their humanity just because they’re dealing with some form of mental illness. The fight for Spears’s freedom from her conservatorship continues, as does the battle against the misogynistic and ableist legal framework that has left potentially millions of people stripped of their autonomy. 21st-century eugenics reigns shockingly supreme.

← Who Needs a Band When You Have a Face? | Countless People Show Love To Conan On His Last Day →