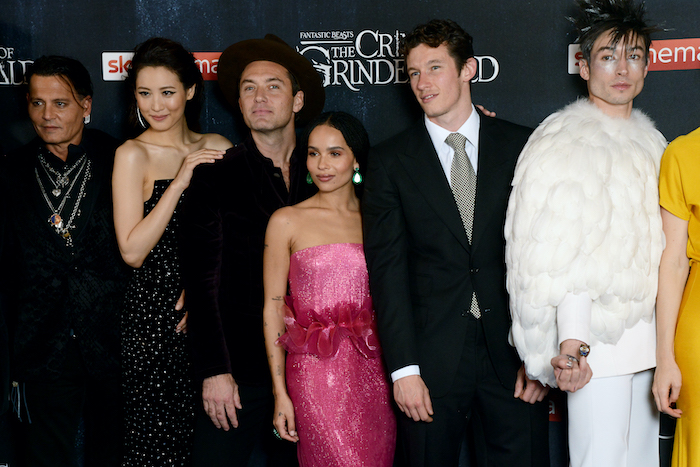 Why Does J.K. Rowling's 'Fantastic Beasts' Franchise Have an Abusive Actor Problem?!

It gives me no pleasure to bring this up, but I gotta ask—What the f*ck is up with the Fantastic Beasts franchise?! Why does it have multiple, deeply sh*tty, abusive people in it?!

First, they replaced Colin Ferrell (which some people weren’t too happy with on this very site) with noted a*shole Johnny Depp. Not going to get into the litany of f*ckery that jag has pulled (go read Mike Redmonds’s recent post on the matter) but let’s just put it this way— if you know you know, and if you’re one of those weirdos who will be in the comments/tagging me on Twitter for the next two weeks to defend your greasy god because his relationship was abusive all-around, then you have to follow your path, I guess. It’s the wrong path but we’re not here today to get into that.

Look, if you have one abuser in your cast, you’ve got an abuser in your cast and apparently Hollywood’s tolerance for that is high. However, this franchise has two Renners because Ezra Miller (who uses they/them pronouns) pulled some absolute f*cking bulls*it recently when they decided to choke a woman outside a bar in Reykjavik, and it was caught on video. You can read about the attack here, I am not going to link the video but it’s important that you know that the woman did not pose an imminent physical threat to Miller, based on the distance she was from them in the video.

I bring that up for a very specific reason—there’s violence and then there’s choking, which is a major f*cking indicator of homicide. So far we don’t know the entire context of the altercation (Miller and their camp are staying quiet), which is to say that perhaps some major threat preceded it (highly unlikely, but let’s give the benefit of the doubt for a moment)—but regardless, if your physical wellbeing is in danger, extract yourself from the situation how you can, don’t go in to choke someone. Choking is a highly gendered crime.

If you haven’t seen the video, I can tell you that the woman in question was nowhere near being in Miller’s personal space to constitute an imminent threat, so whatever their excuse is here, being threatened isn’t going to hold water. Furthermore, there is no reason to choke someone. Ever. When you choke someone that’s akin to raising your hand and saying “yes, I’m capable of murdering women” as an NIH study found in 2007 in researching the correlation between strangulation and intimate partner violence:

Here’s another direct quote, from an online study published on the Alaska Department of Health and Human Services website:

Granted, Miller and the woman he choked were not in a relationship (as far as we know) but the correlation between murder and choking is well-established, and extremely scary and shouldn’t be taken lightly. It is chilling stuff.

Which leads me back to the original question—what the absolute f*ck is going on with The Fantastic Beasts franchise!? One abuser might be a fluke. Two abusers? You have to stop and take stock of what’s going on, and whether there’s a path forward, here.

Look, I have advocated on this very site that sometimes when someone gets themselves into a bad situation where there is (alleged) abuse involved, we need to allow them the grace and space to come to terms with their actions. I truly hope Ezra Miller gets help, because choking is scary, and they went straight for that move in that video and that terrifies me for the reasons I outlined above. Choking is an intimate, extremely violent act, I cannot stress that enough. It’s a major red flag.

However, just because Miller should be afforded the ability to reckon with their personal actions doesn’t mean that a family-friendly franchise in the Harry Potter universe, one of the most beloved and well-known in the entire world, should keep them on in their role. We all should be afforded grace when we f*ck up, but that doesn’t mean our actions shouldn’t have consequences, either.

You’ll recall that J. K. Rowling went to bat for Johnny Depp staying on in his role after his abuse allegations first came to light. I’m kind of dreading her response to this matter, if she gives one—I’m not sure it will be in line with “choking is scary and a red flag and holy s*it, that person needs strong professional help immediately so it doesn’t escalate further” which was my first reaction.

Apparently you can successfully brush off feedback when you have one abusive ass in your cast (looking at you, Avengers!) will you be able to do it with two?!

I don’t know, I hope not. The Fantastic Beasts franchise has an abuser problem, the only question is—how, or perhaps, if they will they solve it?

← Redditors Talk About Littering, Rude People, And Other Little Things That Cause Them Immense Rage | Should You Watch 'The Roommate,' That Trending Movie on Netflix with Minka Kelly and Leighton Meester? →