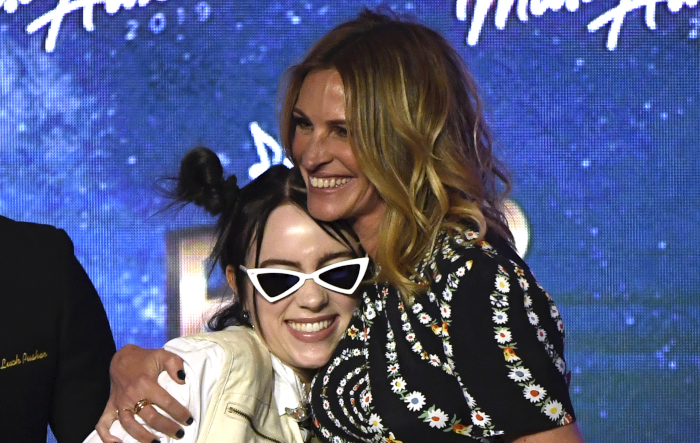 I first became aware of Billie Eilish when a friend from out of town came to LA with her extended family, and a youth in the group was going to a Billie Eilish concert that night. Being an old, I asked “who is he?”

Now, I am not jiggy with it, as the kids say (and the kids most definitely still say that) so I had no idea who she was at the time. Frankly, I find keeping up with the music scene exhausting especially when I can just listen to the same 5 bands over and over again because I’ve turned into my Dad and Green Day is my Steely Dan.

Anyway, you’re probably here because you want a primer on who Eilish is, and what you need to know about her in order to fit in with the cool kids or, more likely, need to keep abreast of pop culture stuff to win at pub trivia. Don’t worry, whatever the reason is, friend, I got you.

I hadn’t heard the song up until about a week ago, so if you’re like me, and want all your information now without having to work for it, here’s the YouTube video!

(I cut to where the song starts because the video starts with her taking out her retainer, and mouth-sounds enrage me, so I’ve done you the kindness of giving you the option of avoiding it if you want.)

She’s 17, so that’s kind of neat. When I was 17, I was not a big-time music artist. She also writes (along with her brother) a lot of her own songs, which is honestly a lot better than what I do, which is try to take credit for Weird Al songs with a straight face and then fail miserably.

Her full name is Billie Eilish Pirate Baird O’Connell, which means buying her monogrammed anything is going to be a real pain, friends. Don’t say I didn’t warn you. Related, I wish my middle name was “Pirate.”

More to the point, it may seem like she came out of nowhere this summer, but that’s because you’re like me and you weren’t paying attention. She’s been steadily building up her fan base since 2016 when her song “Ocean Eyes” was uploaded to Sound Cloud. (Sound Cloud is basically YouTube for music, meaning aspiring artists upload their music to the platform, hopefully for it to take off and build a following from it.) From there she had songs on the soundtracks for both seasons of 13 Reasons Why which, if you recall, was a massive thing for the under 21-set. (If you’re my age-ish, the closest approximation I can give you is Titanic, as far as how big that show was for a bit, and maybe still is. It’s just come back for the third season but honestly, I don’t really get it. I did, however, see Titanic three times in the theater in December 1997.) Additionally, Apple Music named her an up-and-coming artist towards the end of 2017, so it’s not like this has all happened overnight even though it seems like it. During this time, she was also collaborating with a lot of artists that people over the age of 22 have no idea who they are, but the main takeaway is that people who didn’t have the opportunity to see Titanic in the theater during its original run do know who they are, which only helped build Eilish’s awareness and popularity.’bad guy’ is the fifth single off her 2019 album When We All Fall Asleep, Where Do We Go?, which was released at the end of March this year. That’s around tax season so it’s understandable if you didn’t note the release. I didn’t either.

Now that you know the basics, you’re probably wondering about the hard-hitting stuff, and friends, I hate to say it, but so far we don’t have her official stance on anything important.

As far as I can tell, via some light Googling, Eilish has not come out publicly in support of, or an opinion on, the following:

i have not known peace since i found out billie eilish thought the spice girls were a fictional group created for the movie pic.twitter.com/b9J1DHj82X

Her favorite John Cusack movie (hopefully it’s Grosse Pointe Blank, but The Sure Thing is an acceptable answer, too.)

Her opinion on tax codes.

See? Not a lot of juice, here.

She has a song about Zombies, inspired by The Walking Dead. Rad! Per Harper’s Bazaar:

“My first real song was about the zombie apocalypse actually, which is weird because it’s out and nobody knows that that’s what it’s about. It’s called ‘Fingers Crossed.’ I literally just watched The Walking Dead and I took little lines from it. Just watch all of The Walking Dead and you’ll find some things that are in my song and some episode titles that are in my song.

I’ll be honest, this whole thing kind of got away from me, here. I hope you’re walking away with a better understanding of who Billie Eilish is, and perhaps more importantly, who you are. Obviously, I will be sure to alert you if she comes out in a pro-ghost stance because that’s what’s truly important here. Until then, friend, I hope this helps you win at pub trivia night.