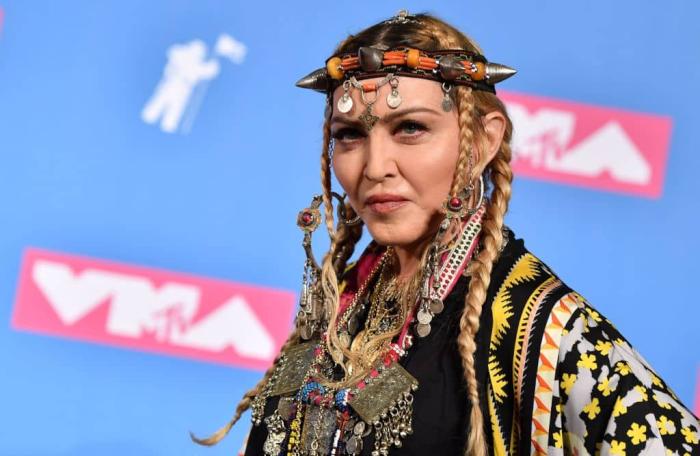 Madonna Louise Ciccone, one of the most influential and popular musicians of the past four decades, is now 62 years old. The Queen of Pop casts a large shadow over modern-day music and pop culture, from her continual aesthetic and musical reinventions to her wielding of fame as a social and economic tool. More knowledgeable people than I have discussed her immense legacy and offered fully crafted narratives regarding her various ventures and the importance of her work. No doubt those tales will be retold and updated time and time again as Madonna continues to carve her own path in an industry that has increasingly rejected her as a mainstream icon. Of course, that’s not what most people are talking about these days. A quick glance on Twitter reveals that most users are frantically discussing her face.

Madonna is a regular user of Instagram, sharing images, throwbacks, and exclusive peeks with her 15.5 million followers. Lately, she’s been doing a lot of work in getting out the vote for Biden and Harris, as well as dropping hints over the future biopic of her life that she is directing and co-writing. In the images without any evident filters or Facetune, Madonna looks smooth-faced, her lips well-plumped, and her cheekbones sharper than usual. This is a famous woman in the public eye who has had some work done, and that seems to have set off some unexpectedly virulent responses.

Madonna is a woman of image, an artist who has been lambasted for decades for supposedly prizing style over substance, a criticism that seems like the words of someone who doesn’t like or get what she’s doing. She was derided for paying homage to-slash-appropriating Marilyn Monroe’s Gentlemen Prefer Blondes attire for her ‘Material Girl’ music video. Her ‘Erotica’ and ‘Sex’ book era was dismissed as shock-tactic porn of no value. Even her critical peaks were often mired in a strange sort of cynicism regarding her style, her constant changing of image given less credence than the men who blazed those trails, like David Bowie and Prince. And while both of those men remained sex symbols right up to their deaths, Madonna aging into a woman in her 60s has been slammed in every possible manner: She’s too old to keep dressing like that; who does she think she is; Christ, she got ugly; why can’t she act her age; she’s gotten so undignified; I miss the old Madonna.

People have been ragging on Madonna’s changing appearance since she released ‘Lucky Star’, but the past couple of decades have been heavily defined by her defiance of the aging process. This is not a woman who ever planned to ‘grow old gracefully’, a phrase that is utterly meaningless and sexist as all hell. During the ‘Confessions on a Dance Floor’ era, Madonna got noticeably more buff and showed it off through elaborate dance routines while styled like a ’70s disco diva, complete with leotard and Farah Fawcett hair. It wasn’t just that she was toned: She had full-on biceps, sharply sculpted with her veins popping. Tabloids like The Daily Mail offered detailed diagrams on every deltoid and vein on display. Others described her as ‘freaky’ or ‘mannish’, while comedians like Russell Howard seemed truly disgusted that anyone would ever want to look like her. That’s not what 50+-year-old women are ‘supposed to look like.’

The nastiness only increased when it became obvious that Madonna was undergoing some sort of surgical work on her face. It could be fillers or a facelift or good old-fashioned botulism. Whatever the case, that wasn’t good enough either. The offense seems to be more with the fact that she’s fending off aging more drastically than what we are used to from famous women because, let’s be honest here, everyone’s had work done. OK, they may not all be seeking marble-smooth round cheeks, but misogyny is a harsh mistress, and actually looking like your age is still a no-no for women in the public eye. Everyone is supposed to play this ridiculous game wherein they talk coyly about having a good diet and moisturizing every night and being so comfortable in their own skin, but nobody is meant to admit to the five-figure laser treatments, the collagen injections, or the skincare of such exorbitant cost that it would pay my rent for several years. You can’t age but you still must maintain the illusion of perfection that fighting the process too stridently would ruin. Think of Paul Rudd being heralded for his perennial youthfulness. While it’s great to see 50+ women like Cate Blanchett, Angela Bassett, and Gillian Anderson celebrated for their sexiness and not written off as old-maids, the severe limitations put upon them, and women as a whole, to maintain a degree of impossible youthfulness is evident. And for those of us who are aging without the help of rich people magic, we are left with accusations of ‘letting ourselves go’, or ridiculous assertions that our ‘ugliness’ is tied to our goodness or ‘problematic’ lives.

Madonna has rallied against ageism for years now. During her acceptance speech for Woman of the Year at the 2016 Billboard Women in Music Awards, she emotionally discussed the many ways she had been derided by the media over the course of her career, including for the crime of getting old. Of course, it’s not as though she’s rallying in favor of all older women. This has always been very specifically about Madonna’s brand of aging. One of the reasons Madonna elicits these kinds of responses is not just because she refuses to look 62 but because she refuses to act 62. She still dances provocatively, sings about smoking weed and getting down with it, and releases music in the pop genre, which has always been labeled the domain of the young. If it seems like she’s trying a bit too hard to be down with the kids, that’s because she is, and I say that as a fan. The music is still often very good (‘Madame X’ is a great album overall), but for an artist who was defined for the first 25 years of her career as the pinnacle of the zeitgeist, it will always be kind of odd to see her trailing behind trends. The queen of shock is no longer shocking, mostly because she’s done everything already and is now repeating herself to diminishing returns. Her lavish ego has also raised more than a few eyebrows, particularly in tone-deaf moments such as her tribute to Aretha Franklin which was mostly a tribute to Madonna.

I imagine that a lot of skeptics would have more patience and empathy for Madonna’s aging predicament if she were still topping the charts or had taken on a new persona that felt fresh and vibrant. Hell, I think she would be celebrated proudly if she were to go full Cher and position herself as a near-ethereal figure in music, totally beyond our mere human understanding of cool. Of course, that’s not a privilege we afford to many women of any age. Madonna is an artist whose work is inextricably entwined with her body, and it’s something she’s committed to continuing right into her 60s. That’s something that we should be excited to celebrate, but instead, we’re just kind of tired. Madonna blazes trails but only for herself, especially when it comes to aging, and frankly, I think we want more.

← Donald Trump Calls Fauci a 'Disaster'; We Ponder Whether Chris Pratt Is MAGA | Zoom Dick Is Trending Because of Legal Analyst Jeffrey Toobin →