One of the big stars of last year’s Oscar ceremony, Bradley Cooper (who performed with Lady Gaga in 2019), also appeared at last night’s Oscar ceremony, though he was not nominated nor did he present. What the hell was he doing there, besides chilling with Brad Pitt? 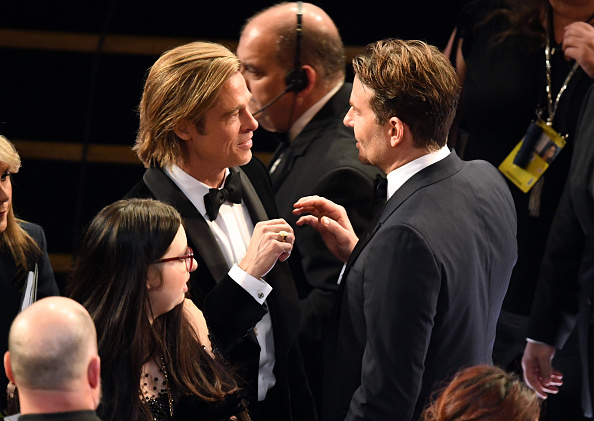 Pitt had attributed his sobriety to Bradley Cooper at an earlier award ceremony, which was very sweet, but also, how the hell do Brad Pitt and Brad Cooper — who is 12 years sober himself — even know each other? Cooper is from Philly and Pitt is from Missouri, and they’ve never once worked together, even in a production capacity. In fact, the only time they appear together according to IMDB are at awards shows. Maybe they struck up a friendship that way?

Attending last night’s Oscars did, however, give Bradley Cooper an opportunity to briefly reconnect with an ex-girlfriend, Renee Zellwegger. They dated from 2009 to 2011, after filming Case 39 together, a movie that no one saw because it was very bad. That was sort of the beginning of Cooper’s upswing and Zellwegger’s downswing (until she bounced back with another Bridget Jones movie, the Judy Garland biopic, and that trashy Netflix show, What/If). They looked cute together. 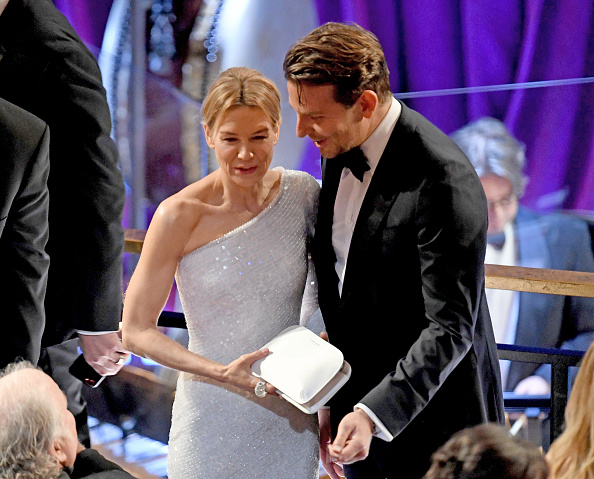 I think maybe Brad Cooper is just one of those nice guys who hang out with everyone, even if he’s not dating Laura Dern, Jennifer Garner, or Anna Wintour. He did, however, have work reasons for being at the awards ceremony last night. In fact, he was thanked during Hildur Guðnadottir’s acceptance speech for Best Score for Joker. That’s actually why Cooper was there: He was a producer on Joker, which makes some sense: He and Todd Phillips go way back. Phillips was a producer on A Star is Born. Phillips directed Cooper in The Hangover movies, which launched him to the A-list. I assume that Cooper may have been instrumental in hiring Guðnadottir for the gig.

Had Joker won Best Picture, Bradley Cooper theoretically could have appeared on stage to accept the award with all the other producers, and that is why he was at the Oscar ceremony. Cooper by the way, is otherwise working on his next project, a Leonard Bernstein pic that he is writing, directing, and starring in alongside Carey Mulligan.

← Where You Can Stream Every Bong Joon Ho Movie, Including Best Picture Winner 'Parasite' | Elizabeth Warren Ad Libs a Joke About Mike Pence at a N.H. Rally →