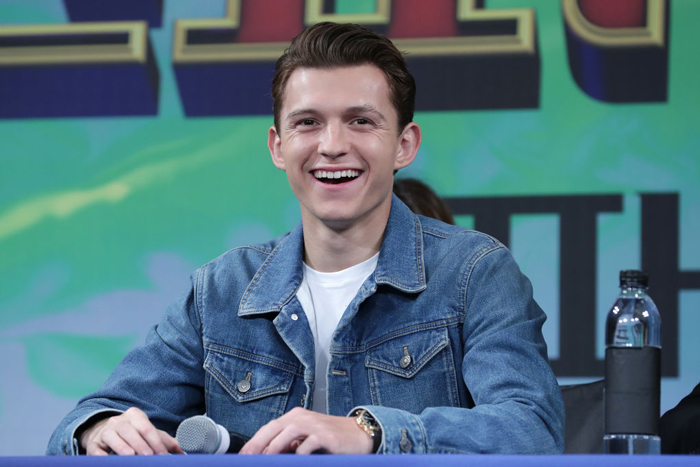 While quarantine has turned some stars to tone-deaf social media posts or bizarre paparazzi walks or curious bike rides to Brad Pitt’s house, Spider-Man: Far From Home’s Tom Holland has been getting by with a little help from his friends.

What’s the MCU hunk been up to in quarantine? Well, so far he’s taken on a hot handstand challenge, fed the fires of Gyllenhaal/Holland shippers, and has NOT been defending Karen-centered think pieces by notorious TERFs. Holland went on Jimmy Kimmel Live to share more of his shelter-in-place shenanigans.

Holland recorded his side of this interview from his London home, where he’s been on lockdown with three roommates “for about a month.” Asked if there’s been any tension, he laughed, “Not really because we’re all drunk all the time.”

Party times aside, Holland says he has been “a little bit productive.” He and his brother/roommate Harry Holland have been writing a script together. “We’ve done some really good work on that,” the Rihanna stan explained, “We’ve sent that out yesterday to the first bunch of producers. Which is actually more nerve-wracking than anything I’ve ever done in my career, because I’m worried that they’re going to find out that I’m really stupid and I can’t spell anything.”

Aside from that, Holland says he’s been playing Playstation, watching movies, and “catching up on film history,” and “drinking a lot.” He admits he was going to try to cut back on the imbibing, but then Ryan Reynolds sent a tempting gift.

“Ryan Reynolds sent me a case of gin,” Holland said, holding up a bottle of the Deadpool star’s brand of Aviation Gin, which has been donating 30% of its proceeds to currently unemployed bartenders. “As I was literally like, ‘This morning, I’m not drinking the whole week. I’m not drinking at all. And then the doorbell rang and there was a case of gin from lovely Ryan…It says here on the box, ‘Some friendly neighborhood Spider-Gin. Love, Ryan.”

Other superhero movie folk have also reached out. Holland has been doing “pub quizzes” with Spider-Man: Far From Home co-star Jake Gyllenhaal and the Russo Brothers (directors of Avengers: End Game). He’s also been trying to do a virtual workout session with Gyllenhaal, which would be the greatest Peloton ad of all time. Then Holland casually mentions Facetiming Iron Man’s Robert Downey Jr., “and he was in the bath.” And like, maybe I should be mad at how this presumably straight bloke is seemingly queer-baiting in social media and interviews, but 1) I don’t know Holland’s Kinsey Scale number, so it’s unfair to assume/judge. 2) It’s hot. And 3) It’s the most queer representation the MCU has given us. So bless Holland for single-handedly offering us SOMETHING gay to swoon over.

On top of all this, Holland played hero to little Billy Kimmel, who is celebrating his third birthday. Kimmel says he’d planned to hire a “guy in a suit” to play Spider-man at the kiddo’s party, but obviously that can’t happen. However, video-chatting with the MCU’s Spidey isn’t a bad substitute! Need something sweet? Jump to 5:58 to see Holland—in his Peter Parker accent—sing Happy Birthday to Billy while his flatmates join in.

← The Anti-Lockdown Protests Are Not Real Life | Dogs Are Precious, Perfect Cartoons That Give Humanity Meaning →