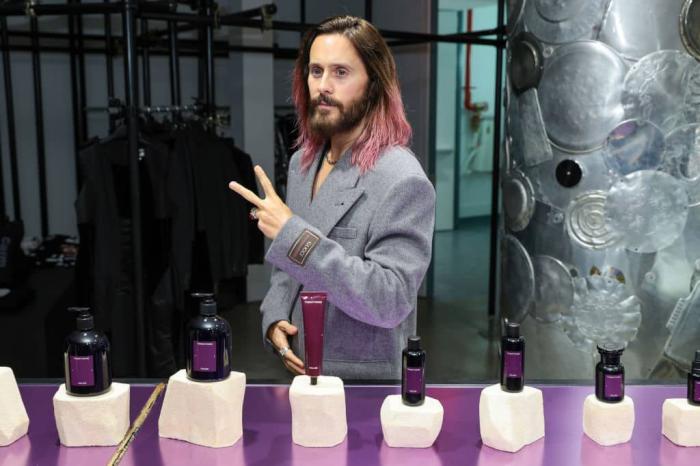 Of course Jared Leto has a skincare line now. It seemed hopelessly inevitable. This month, actor and industry menace Leto revealed his newest range of gender-neutral skin care, body care, and hair care products.’ Twentynine Palms is supposedly inspired by the ‘rugged beauty’ of the desert around Joshua Tree National Park, hence its name. A mini PR boost from Vogue notes how the 50-year-old Leto has ‘the porcelain-smooth complexion of a Renaissance cherub’ and that this range could be the first step towards him becoming a ‘wellness apostle.’ How tedious.


True story: I originally wanted to write a piece on this trend when accused abuser Brad Pitt started his skincare range but was besieged with other deadlines and felt like I’d missed my shot. Mercifully, celebrities are often intensely predictable figures, especially when it comes to a money-making trend desperately trying to stay ahead of inevitable backlash. So, here we are, looking at another entrant into an increasingly oversaturated market, one where the intended audience seems totally unknown to me.

I could probably fill out a solid thousand words or so just listing the skincare brands of the rich and famous. Where do we even start? There’s Fenty Skin, courtesy of Rihanna; Kylie Skin from the youngest of the Kardashian-Jenner clan, as well as Kim Kardashian’s own recent (obscenely expensive) efforts; JLo preaches the magic of olive oil for her range; Jessica Alba promises clean beauty in line with her Honest brand. There’s Cindy Crawford and Scarlett Johansson and Miranda Kerr and Travis Barker and Hailey Bieber and Idris and Sabrina Elba and *takes breath* Kate Moss and Pharrell Williams and I’m gonna stop now.

There are certain areas where celebrity brands seem bound to dominate the field. We’re all too used to our favorite stars suddenly revealing a range of nail polishes, beauty palates and alcohol ranges. There’s nothing new about famous people shilling something but there’s been a shift in the past decade or so towards going from a spokesperson to the benevolent CEO and creative founder of something ‘disruptive.’ There’s a sense of power in this option not available when you’re just the pretty face of someone else’s company, even though doing so can often be highly profitable and make a lot more sense than going it alone. Maybe it’s a post-#girlboss craving, that urge to prove that you’re not just an actor but a multi-talented jack of all trades. It certainly doesn’t hurt that, when done well, you can make more money than any role will ever pay (hello, Casamigos and Fenty Beauty.)


All of this makes perfect sense yet I can’t entirely square it with the skincare fad. The disconnect between brand and star is a frequent problem of perception for potential customers. It feels more evident than ever with skincare. I don’t think we really care when the celeb selling their tequila brand doesn’t look their best in the publicity images. Hey, it would be more fitting to see The Rock looking super hungover while selling his tequila. That’s not so easy when you’re trying to plug wellness and self-care that is reliant on a promise of youthfulness and wellbeing (Brad Pitt does not have great skin so him selling his own line seems DOA.) No offence to Kate Moss, who has been a supermodel for decades, but I don’t look at her and think of creating inner harmony. I think about her being one of the most notorious hard partiers in her field. Sure, that requires a certain level of upkeep but it’s tough to get people to buy that it comes from a serum.

And, of course, that’s the elephant in the room. It seems highly unlikely that any of these celebrities explicitly use their own brands to maintain their questionably youthful looks and pristine skin. When Lopez brags about olive oil’s secret powers as a woman in her 50s, do you believe her? Kim Kardashian’s face looks totally different from what it did only a few years ago and nobody buys that it’s because her £82 eye cream. We’ve long been forced to accept the collective delusion that famous people are just magically hotter and ‘perfect’ in a way us normal folks aren’t. If I had a pound for every time I read an article where a celebrity with ridiculously smooth skin and a non-moving forehead was prized for being ‘ageless’ then I’d probably have enough money to actually buy the entire SKKN range (seriously, it’s over $600.)

The celebrity skincare fad forces us to tangle with a strain of wilful ignorance that the ‘magic’ of fame is built upon. It tries to square that unattainable fantasy with the promise of a relatable commodity, and it seldom truly works. It’s simply bad business to make promises that everyone knows are built on expensive bullsh*t. You can maybe get people to buy into the power of a good lipstick to pay homage to Lady Gaga or Selena Gomez because it doesn’t seem unfeasible that these celebrities would wear their own make-up lines. But lipstick is not a cleanser or serum, and it seems like total fiction at times to imagine a celebrity using their own skincare. Remember when Kylie Jenner launched her skincare with a walnut scrub and was dragged on social media for using potentially harmful ingredients? Do as she says, not as she does.

I’m curious as to how lucrative this market can truly be when it’s both extremely crowded and faced with such skepticism. I don’t know a lot of skincare fans who are willing to drop their favorite products in favor of trying out the newest celebrity’s range, especially when the costs are often exorbitant. This feels like a bubble waiting to burst, much in the same way that the make-up brand has stopped being a guaranteed money-maker. Not even the biggest names can withstand such pressures. Kylie Jenner may have made her fortune from lip kits but her skincare range is nowhere near as popular (and her recent swimwear and baby lines disappeared without a trace.) Lady Gaga’s Haus Laboratories was launched to lukewarm reviews and had to undergo a total shake-up to stay afloat. Rachell Hofstetter, a gamer and influencer, launched her own beauty line called Rflct which imploded after less than a fortnight. This is a field where your fame is no longer a definite route to success. Indeed, investing so heavily in it could be part of the problem. Forma Brands, the parent company of Morphe and a host of celebrity lines, is considering filing for Chapter 11 bankruptcy. Business of Fashion reported that the company’s heavy investment in celebrity and influencer beauty was partly to blame (tying yourself to endlessly controversial figures like Jeffree Star doesn’t help.)

And this doesn’t even get into issues of the amount of plastic waste these brands produce, or how many of them seem to use the same formulas for cheaper products and just increase the prices to add prestige. There’s a reason every skincare nerd on TikTok seems to be plugging CeraVe, which you can buy easily, affordably, and without worrying if it’s going to live up to the grand promises of the A-Lister of the moment. As someone with bad skin due to years of acne and psoriasis, I’m not exactly the target demographic for much of this, but it still wears on me how the societal pressure to have ‘good skin’, whatever that means, is so heavily tied to these notions of class, money, and worth. Such is the pain of capitalism, of course.

I doubt we’ll see Leto’s skincare line become a long-term hit to stand alongside Fenty, but I don’t think we’ve seen the end of this exhausting trend yet. Whatever will come next? Celebrity homeware brands? Celebrity footcare? Answers in the comments, please!