Bring on the glamour and questionable fashion choices! Last night, the Golden Globes had Hollywood’s brightest turning out for the booze-fueled kick-off to awards season’s final leg. I didn’t watch the Golden Globes, because 1) the Hollywood Foreign Press apparently believes all the best films of the year were coincidentally made by men, 2) Ricky Gervais is a transphobe and past-his-prime provocateur, and 3) Happy Endings is still on Hulu. But that didn’t stop me from enjoying the red carpet and color commentary via Twitter.

Women in suits was a hot trend for winners. Check out Fleabag’s Phoebe Waller-Bridge and The Farewell’s Awkwafina.

awkwafina with her golden globe at the #GoldenGlobes pic.twitter.com/o5I1KoGaFz

Here’s an adorable shot of Unbelievable’s Kaitlyn Dever and The Crown’s Olivia Colman, who went on to win for Best Actress in a Television Series - Drama.

WHO ALLOWED YOU TO BE THIS BEAUTIFUL!! 😭 https://t.co/2t4c5JsHLK

Writer/director Céline Sciamma and her leading ladies Noémie Merlant and Adèle Haenel gave us this portrait of three ladies on fire.

The Farewell’s Zhao Shuzhen looked majestic the moment she hit the red carpet.

Zhao Shuzhen's arrival is all I want to talk about. #GoldenGlobes pic.twitter.com/WBByR86h6F

Beyonce is at Golden Globe Awards dressed in a gorgeous dress which serves as a reminder that she is THE Golden Globe. The dress has peasant proof sleeves keeping the unworthy and non-billionaires at a distance. Hov can’t even touch her. 👑 🐝 pic.twitter.com/36Jc42VuUS

"I saw it in the window, and I just couldn't resist it." pic.twitter.com/OKKznJ53Nn

Cate Blanchett’s dress had a lot of possible inspirations.

ok cate!!! looking like if i held you up to my ear i could hear the sea 🙌🏾 pic.twitter.com/5S1qDmsupZ

Cate Blanchett looking like the most glamorous wicker chair at CB2 pic.twitter.com/UfqtxvzAeu

ana de armas can step on me on that dress#GoldenGlobes pic.twitter.com/t1YEbTwHrv

Little Women’s Saoirse Ronan went to slinky and sexy it was dangerous. 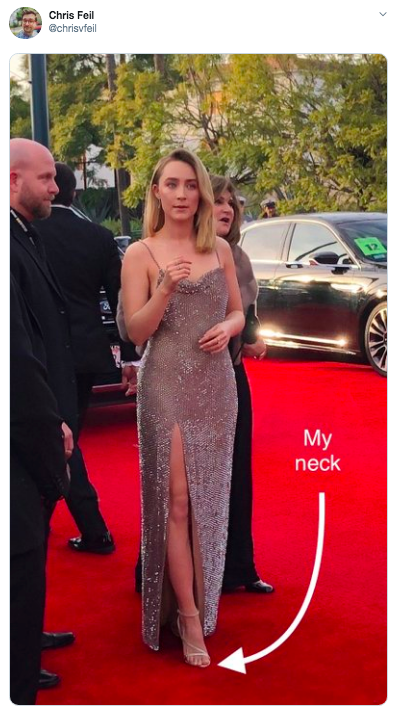 I can’t nod. She broke my neck, Emma.

Bombshell’s Charlize Theron made a choice.

I've seen some criticism of Charlize Theron's dress at the Golden Globes, but I think it looks great. It just needs a little adjustment, as shown below. pic.twitter.com/RcecbIILmy

Kerry Washington at the 2020 #GoldenGlobes 🖤 pic.twitter.com/3w3nWMUlMN

why is Kerry Washington shirtless and wearing bondage rope to the Golden Globes? pic.twitter.com/l0e55Ww4rX

#lorraine #goldenglobes Kerry Washington looks like she’s the survivor of some type of accident. Crawling from the wreckage. pic.twitter.com/FbiNxAOloS

So I think Kerry Washington fired her previous stylist, because she’s been serving LEWKS the last few months. 🙌🏾 #GoldenGlobes pic.twitter.com/lUTfVEOpNU

Many had thoughts on Gwenyth Paltrow’s outfit.

I was not prepared for this pic.twitter.com/jaPXjXAyi5

And finally, a goddess walking among us: Gillian Anderson.

Gillian Anderson at the #GoldenGlobes 🤩

What Golden Globes look did you love or loathe?

← The Most Memorable Moments from the 2020 Golden Globes | Inevitability Arrives: Here's the 'The Witcher' Intro Done in the Style of the 'Friends' Intro →