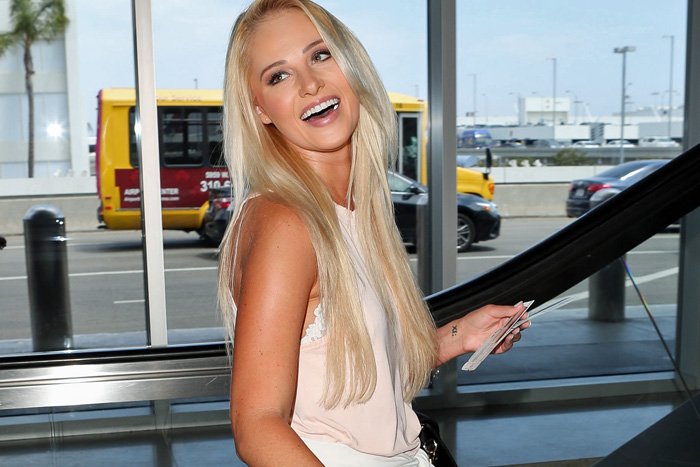 Tangy Larva is famous for exactly two things: Saying mind-numbingly stupid sh*t, and that time she crammed a gun down her pants and amazingly didn’t shoot off her nationalistic noonerhole.

Live. Speak. Stand. Run. Carry with Confidence. Ladies, chances are your assailant is gonna be bigger, stronger and faster and that’s why you have @alexoathletica for your gun, your mace, or even your phone. Yeah, you’ve got it covered. #TeamTomi #alexoathletica #NotYourAverageGunGirl

For those of you who wisely don’t follow Bullet Beaver Barbie’s every move, she was promoting a line of concealed carry yoga pants, which are a thing that exists because God is dead. America shot him. But this year, Tablecloth kicked things up a notch by launching her own signature line for Alexo Athletica to own the libs. You see, if there’s one thing commie pinkos like me have been saying about Tonya Farting for years, it’s that she’s way too controversial to sell stretch pants to morons. We can’t shut up about it.

Well, she sure showed us.

Some have told me I’m too “controversial” to have an athleisure line, that conservatives should just stick to politics and Trump cheerleading. My response? Watch me. Introducing Freedom by Tomi Lahren by @alexoathletica full line available now. #TeamTomi #FreedombyTomiLahren #Alexo #athleisure

Here’s the thing, Alexo Athletica is known for selling pants that give the women the option to accidentally blow a 27th hole in their lady business. (I know how body stuff works.) It’s kind of their niche. So clearly, it’d behoove Tobang-banga to make sure her signature line also has a holster, especially when you’re carving the damn thing out of the American flag and calling it “Freedom.” That’s a simple slam dunk here. Gun pants, gun hole. Boom. CREAM, get the money.

Already, there are comments on the Freedom announcement asking if they will have a holster option — the pants Lahren designed currently don’t have one. In addition to leggings that can’t hold guns, she designed sweatshirts, tank tops, and bra tops that are described thusly: It’s not a sports bra. It’s not a crop top. It’s a bra top.

As a writer, I should really have a more eloquent response than this, but HAHAHAHA, you f*cking idiot.

Who the hell signed off on a pair of gun pants that aren’t even gun pants? It’d be like if I designed a sandwich for McDonald’s, but actually, it’s a sock. I mean, sure, technically any pair of pants are gun pants once you set your lizard brain to it, but Jesus Christ, lady. You literally had one job here. One job.

Anyway, here’s a five-minute-long video about Teflon DumbPants for anyone who violently hates their time and/or mental health. I’d honestly prefer someone fire a gun next to my face than see another second of it, so great, her bejegginged boomstick humping is already working on me, one of our strongest minds. (Run, you fools.)

← Recap: 'Yellowstone' Sure Has a Lot of Murder For a Show About a Ranch | Highlights from the D23 : 'The Mandalorian,' Kit Harington and a ... 'WandaVision' Sitcom? →