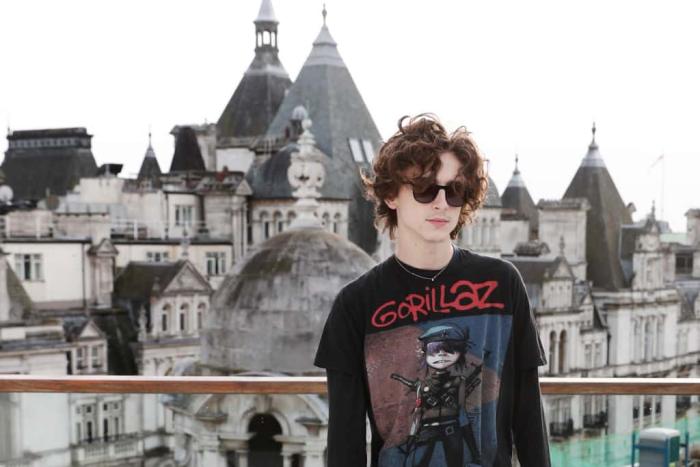 It was recently reported that Timothée Chalamet, Tumblr’s beau du jour and one of his young generation’s most celebrated actors, is currently dating Mexican actress Eiza González, who you may recognize from films like Baby Driver or TV series such as From Dusk Till Dawn. The young lovers were photographed in full PDA mode in sultry poses and poolside kissing performances that would put Ben Affleck and Ana De Armas to shame. They’re young, hot, and practically tearing the skin off one another’s lips with their tongues. It’s full-on, to put it mildly. For some of the actor’s dedicated fans, it’s simply too much.

the way we haven’t had news about timothée for months, not a single paps pic, not even when he was protesting, we didn’t even know if he was in ny or la, and now all of a sudden daily paps content of him with eiza. i’m not gonna say it’s fishy but- pic.twitter.com/CpjTjjVqzj

Y’all bullied Shawn Mendes and Camila Cabello for taking a walk, but let’s talk about Timothée Chalamet having sex with Eiza González in front of paparazzi. 😭 pic.twitter.com/V0isejoV3w

alright alright so eiza was photographed yesterday without timothée, perhaps he officially outran her pic.twitter.com/GF4B1OOLK7

what if timothée and eiza… pic.twitter.com/YOB2doCDkS

Every now and then, a celebrity does or says something that would seem benign to outsiders passing by but sets off an explosion within their fandom. I was already aware of how dedicated Chalamet’s fans could be but even I was surprised by how virulently negative the general responses were to the news of this coupling. Immediately, there were cries that this was a PR coupling, a set-up to promote one another to their respective audiences or as a means to elevate González’s profile with American viewers. One movie forum I frequent was suddenly full of Timmy lovers bemoaning this blunder and declaring him a has-been in the waiting, nothing but a fame-sucker who wanted the spotlight and had shed his original cool boy authentic image. He was ruining his career, apparently. Other fans went into Simone Biles levels of mental gymnastics to prove that he is still perfect in their eyes while Eiza was painted as the disruptive force who kickstarted his downfall.

None of this will be new to you if you’ve ever paid the slightest modicum of attention to celebrity gossip. Uh-oh, two young hot actors with up-and-coming careers in Hollywood are hooking up and making a scene about it. What’s next, red carpet smooching? Joint interviews with People? Instagram couples selfies?! The chances are, however, that this particular story may have bypassed you if you’re not as keyed into this nonsense as I am. After all, it’s not like Timmy is Ben Affleck or that his current romance has reached BenAna levels of questionable cringe. Does it look like they’re laying it on a bit thick? Sure, but not enough for me to understand why Chalamet’s fans are suddenly in panic mode. It’s not like he hasn’t previously engaged in some discomfiting displays of romantic passion with the cameras nearby before. That picture of him practically gobbling up Lily-Rose Depp’s tongue will haunt me for a long time.

Congrats to Timothee Chalamet and Lily Rose Depp on what appears to be both of their first ever kiss pic.twitter.com/2HvkBQiWat

It’s no surprise that the lion’s share of focus on this gossip whirlwind has fallen on the shoulders of Chalamet, the white American who primarily appeals to young women and Film Twitter. The actor has been primed for a specific kind of celebrity since he burst onto the scene in 2012 — remember when he was on Homeland?! — then became the man of the moment following his stalwart turn in Call Me By Your Name. I see him frequently compared to the pretty sensitive indie crushes of generations past, from River Phoenix to James Dean, because of that balance of dedicated acting talent and good old-fashioned cuteness. He’s talented, he’s funny, he’s ‘real.’

There’s still this notion floating around the concept of celebrity that the greatest display of so-called authenticity one can provide while living in this ecosystem is to not participate in its most obvious machinations. You’re not ‘real’ if you’re seen to be enjoying the attention of the public or press. It’s tacky or ‘fake’ to pose for the cameras or be prepared for the endless interview cycle. Of course, you can’t look too much like you don’t care because then you’re ungrateful, and those who truly do sit out the work of celebrity are noticeably less present in the business, a few exceptions aside. Not everyone gets to be Mark Rylance. Indeed, to entirely exclude oneself from the labor of being a star is something that most of the younger generations can’t afford, and Chalamet is clearly aware of that.

Chalamet is also young enough to have grown up in the always-online world. This is one big reason I feel as though this forced categorizing of him as a next-gen River Phoenix in his shyness and avoidance of Hollywood glitz is so odd. He’s clearly not that guy. If he were, he wouldn’t have an Instagram account. He wouldn’t be so game to engage with the talk show cycle or have an obvious clarity regarding his quote-unquote brand. Chalamet frequently plays up his sensitive internet boyfriend persona and has a sharp understanding of what both his fans and the industry at large want from him. It doesn’t hurt that he’s a conventionally handsome young straight white guy, which has already garnered him more attention than many of his contemporaries, such as Jharrel Jerome or Kelvin Harrison Jr. He’s also, crucially, popular with a stream of film-makers, the likes of which are unreachable for most actors his age. I highly doubt that Denis Villeneuve or James Mangold will see pictures of Chalamet playing tonsil tennis for the cameras and think, ‘Huh, he must not be as dedicated to the craft as I thought he was. Better recast him now.’

By contrast, Eiza González is considered the unknown, despite being very famous in her native Mexico. She’s one of those actresses you hear described a lot as ‘the next big thing’, a beautiful and charismatic presence with a solid array of projects under her belt and established appeal to Hollywood’s most beloved demographics. She recently faced backlash after images of her in blackface from a telenovela she appeared in aged 15 resurfaced. Browse the comments of her Instagram page and you’ll find a glut of hostility centered on the fact that she may or may not be dating Chalamet. A lot of the rhetoric is near-identical to the nastiness that Lily-Rose Depp faced when she was dating the actor. Same as it ever was. There is, however, an undercurrent of something much more insidious being directed at González.

So much of this current dynamic reminds me of the days of Bennifer 1.0, when Ben Affleck was portrayed as the beleaguered nice guy whose industry reputation was being dragged through the mud because of the overexposure of his relationship with Jennifer Lopez. She was painted in the press as the ‘Latina babe’ who bagged herself a leading man and wanted to milk it for all it was worth. She was designated the scheming power player in that relationship, not Affleck, who was seen mostly as some powerless boy forced along for the ride, as if he was forced at gunpoint to appear in Gigli. The racist and sexist dog-whistles at play here are obvious.

Women are always to blame for something, especially if they’re ‘scheming’ or ‘ambitious’ women of color. So we get Eiza González, already a successful actress and singer, being smacked down by indignant Chalamet fans as an invading Lady Macbeth, the fame-hungry PR expert who has ensnared poor sensitive indie darling Timmy in her claws. It’s somehow their preferred justification over him being a wilful participant in some old-school gossip shenanigans.

Of course, the big hook here is that, frankly, the general American public doesn’t really care all that much about Chalamet or González. They’re not Ben and Ana and they’re nowhere near as actively performative as that pair either. Even if they did tip off a photographer about their holiday smooching, it’s hardly an insidious call for them to make. They’re not the only famous people trying to keep their name recognition high during a literal pandemic. Instead, what we have is a cautionary tale for fandoms everywhere. It never ends well to think that your guy isn’t like all the other guys. He probably is and that’s fine. It’s business, baby.

← What Is the Last Movie You Saw in a Movie Theater? | Review: 'The Last Of Us Part II' Might Just Be the Best Game I've Ever Played →